Gunther Schuller, La Monte Young, Albany Records, and the New World Symphony were honored for their exceptional importance in contemporary American music at the American Music Center’s Annual Membership Meeting and Awards Ceremony, which was held at the Chelsea Art Museum in New York City on May 4, 2009. The event, which was open to AMC members, the press, and invited guests, also featured a performance of John Novacek’s Four Rags for Violin and Piano with violinist Leila Josefowicz accompanied by the composer at the piano.

AMC’s Letter of Distinction was awarded to Albany Records and La Monte Young. Albany Records, launched in 1987 by Peter Kermani and Susan Bush, has released more than 1000 CDs, the majority of which are devoted to American music. Albany’s catalog spans rarities from the early 20th century (including the first series of recordings devoted to the complete songs of Charles Ives) to works fresh off the page by many of today’s most prominent composers, and has become a vital aural encyclopedia of our music. La Monte Young (b. 1935), a pioneer of extended time durations, just intonation, and conceptualism, is generally acknowledged as the first minimalist composer and has had a profound influence on music ranging from contemporary classical and jazz to psychedelic rock, punk, ambient, and heavy metal. His ongoing projects include the Theatre of Eternal Music, which originally included future members of the Velvet Underground; The Well-Tuned Piano for a retuned Bösendorfer piano which now contains more than six continuous hours of music; the Dream House, a sound and light environment created in collaboration with visual artist Marian Zazeela; and the Just Alap Raga Ensemble, which grew out of 26 years of study with the renowned Hindustani vocalist Pandit Pran Nath. (In October 2003, NewMusicBox published a five-hour conversation with La Monte Young and Marian Zazeela.)

AMC’s New Music Educator Award was given to the New World Symphony, which has enriched the lives of thousands of musicians since it was established in 1987 and has been at the forefront of distance learning with its pioneering use of Internet2. Created under the artistic direction of Michael Tilson Thomas, NWS provides an intensive, three-year fellowship program which prepares gifted graduates of distinguished music programs for leadership positions in orchestras and ensembles around the world.

The AMC Founders Award was given to Gunther Schuller (b. 1925) who continues to maintain an active schedule as a composer, arranger, conductor, writer, and lecturer. Over the course of his career, Schuller was also an extremely influential teacher, administrator, and publisher. He taught at Yale and Manhattan School of Music, and headed New England Conservatory and the Tanglewood Music Center, as well as a publishing house (Margun and GunMar) and a record company (GM Recordings). He began his career as a French horn player, becoming the principal hornist of the Cincinnati Symphony at age sixteen and later at the Metropolitan Opera, and is probably the only musician who has performed with both Miles Davis and Arturo Toscanini. Gunther was at the center of Third Stream music—a term he coined for music that was equal parts jazz and classical. His books, Early Jazz and The Swing Era, have become standard texts. He orchestrated Scott Joplin’s only surviving opera Treemonisha for the Houston Grand Opera (which was also recorded for Deutsche Grammophon) and premiered Charles Mingus’s magnum opus, Epitaph more than a decade after Mingus’s death. Gunther Schuller has created over 160 original music compositions spanning operas, chamber music, works for symphonic winds and orchestral pieces that have now become classics, such as Journey into Jazz, Seven Studies on Themes of Paul Klee, and Of Reminiscences and Reflections, which was awarded the Pulitzer Prize in 1994. (Stay tuned for a NewMusicBox cover with Gunther Schuller in July 2009.) 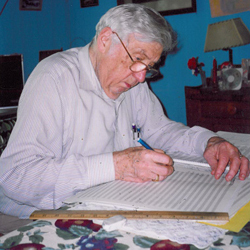