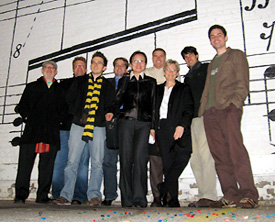 A group shot from the 2007 Minnesota Orchestra’s Composer Institute

More cowhorn. That’s what Michael Gast, Principal Horn, wants. “You guys shouldn’t be afraid to use this in your music,” he said, showing us the primitive Swedish instrument in our horn seminar this afternoon. And the same went for the Wagner Tuba, the natural horn, and, as William Golding fans would be delighted to hear, the conch shell. Gast has a you-write-it, we’ll-play-it attitude, an especially pleasing one for composers who have been raised with the idea that orchestra performers are reluctant to do anything beyond the ordinary.

Our day had begun several hours before Gast’s session when we each met individually with Osmo Vänskä, the Orchestra’s music director. Osmo, as he insists on being called, is known to be an incredibly diligent worker, so I was pleased but not surprised when I saw how thoroughly he had marked up my score. His focused questions made me think about my piece at a deeper level than I ever had. “What does ‘With Bite’ mean? That can be interpreted in so many different ways. Do you think that figure there will be heard? What effect are you going for here exactly?”

I learned yesterday that Osmo, understanding how essential it is that the participants’ works be allotted substantial rehearsal time, was instrumental in the Institute’s decision to upgrade from orchestral readings to a full performance. And perhaps I should be embarrassed to say that it had not occurred to me until recently how significant it is that Osmo himself will be conducting our works rather than having someone else take the baton. Not only does this mean that we benefit from his great talent, but it also means there will be a larger audience Friday night, as Vänskä is incredibly popular in Minneapolis. (Word on the street is that several of the city’s inhabitants learn through Osmosis. They drink Osmopolitans. They like to get high and synch up their Pink Floyd LPs with the Wizard of Osmo.)

Following the one-on-one sessions with Vänskä, concertmaster Jorja Fleezanis and viola principal Thomas Turner led a healthfully intimidating upper string seminar. The two had looked very carefully through our parts beforehand—often to the extent of comparing them with the score—and asked us about anything that wasn’t 100% clear (about 99% of our music), educating us and also saving valuable rehearsal time. The seminar lasted an hour longer than scheduled. Every event today ran long, actually. But for the first time in my life, it was reassuring to be behind. It meant that these musicians care dearly about our work, so much so that they’d give up their own free time to ensure the performance is as successful as possible. You know your music is in good hands when you’re ready to call a session quits, but the performers, who in the end have much less reason to care about the piece than you do, force every drop of energy out of you.

The day that began with Osmo ended with Osmo. After Stephen Paulus’s informative presentation on self-publishing, the Institute participants and Vänskä dined on Indian cuisine down the street. As the maestro entertained us with stories of his musical family, from his fiddle-playing father to his metal-loving son, I began to feel like I was catching a bit of the Osmo bug myself.