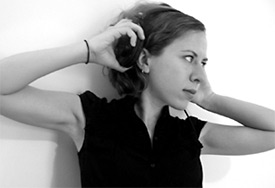 I may be a workaholic, but even for me, yesterday was a stretch. The day began at 9 a.m. with a workshop on creating scores and parts by master copyist Bill Holab; at 1 a.m. I found myself in the Orchestra Hall green room analyzing a score of Aaron Jay Kernis’s Color Wheel. The fifteen hours in between were spent rushing from masterclass to workshop to concert and back again.

We finally heard the Minnesota Orchestra in action today, at a young people’s concert for local school children. Approaching the concert hall, we could hear the deafening roar of two thousand kids, most of whom took it upon themselves to spastically (and hilariously) conduct the entire concert from their seats. The orchestra’s playing was superb, and the orchestra members kept their cool despite the presence of a local mime troupe and sporadic outbursts from the enthusiastic audience.

In the journey of public embarrassment that is being a young composer, nothing can be as tongue-tying as coming face to face with a professional performer who has been working on your piece. In workshops with percussionists Brian Mount and Kevin Watkins and harpist Kathy Kienzle, we all had to confront the fact that memorizing an orchestration book will not prepare you for the reality of working with real people. Some of what we had written was impossible, some inaudible, but—God love ’em—these performers worked on what we had written, and if they can’t do it, it’s time to come up with plan B. The thought on constant loop in my head this week: “I can’t believe I’ve never learned this before.” The simplest things: like making sure a percussionist doesn’t have to train for a marathon before making a switch between instruments in a short amount of time; or not requiring Player No. 1 to tackle four mallet instruments with his or her back to the conductor while Player No. 2 is falling asleep behind the triangle…Duh, Missy.

The day ended on a high note (no dorky music pun intended, seriously) with a presentation by Aaron Jay Kernis. While writing for the orchestra may seem to require that a composer contort herself into knots trying to make a hundred players happy, Aaron reminded us that in the end we need to just do what we want. Despite the friendly demeanor and soft voice, Aaron is truly the rock star of the orchestra. He breaks the rules with his 25-minute non-stop sonic assaults and doesn’t look back. Guns may be illegal in Orchestra Hall, but Aaron proved to us that, with this orchestra, it’s still possible to blow people away.

► ▼One thought on “Day Three: Public Embarrassment and the Big Guns”