An interview with the author of Winter Music: Composing the North.

Molly Sheridan: We often idealize the importance of the urban cultural metropolis to building an artistic career. Your book celebrates the other path taken to the extreme, though as Kyle Gann mentions in his intro, we see you here in Manhattan with some frequency as well. For the composer whose sense of home compels him/her to live “off the radar” if you will, what advice would you give knowing what you know now?

John Luther Adams: Find where you belong—musically, geographically, spiritually—and ground your life there.

I grew up in several different homogenous suburban environments where I never felt I belonged. As a young man I came to Alaska in search of home. The moment I arrived I knew I’d found it. And during my first ten or twelve years up here I rarely left home. I didn’t give much thought to professional success or building a career. But during those years I discovered my music and a built a life that wouldn’t have been possible in another place.

Music is an art. And art is a life’s work. Professional success may or may not come. But a life in art is a great privilege. It’s also an obligation. An artist’s first obligation is to the art. If we’re true to the art then the art gives us a life. In turn, our art becomes our best gift to the world in which we live.

Molly Sheridan: Though the book is not long, I really got the sense by the end that even if I hadn’t known you before, I would understand not only the basics of your musical thought but also have a solid picture of your life as environmentalist, husband, and friend–esp. from the journal entries and reflections on your wedding anniversary. Why make the book about more than the music?

John Luther Adams: The earliest piece in Winter Music dates from 1974. The most recent is from this year. So putting the book together was in part a process of reflecting on thirty years of work. The first draft was twice as long as the final version. After reading the manuscript one of the anonymous readers (whom I later learned was David Rothenberg) gave me some very wise advice. “Make it like your music”, he said. “Leave out everything that’s not essential”.

Molly Sheridan: You include a number if score pages without additional comment, almost as illustration. Why was that decision made?

John Luther Adams: You’re right. The score excerpts in Winter Music do function as illustrations. They illustrate ideas in the text and, for those who read music notation, they provide glimpses into my musical texts. For readers of the book who don’t read music I hope the score pages serve at least as attractive and evocative graphics.

Molly Sheridan: Your discussion of experiencing native music that is more than “art for art’s sake” reminded me of John Dewey’s writings on art and aesthetics. How does living amid that experience influence you and the work you create?

John Luther Adams: I’ve been very fortunate to travel all over the North and to experience festivals and traditional ceremonies in Iñupiat, Yup’ik and Athabascan villages. Native cultures make little distinction between the quotidian and the spiritual. What we call art is valued not as something apart, but as a central part of the life of the community. The song maker is honored as a bearer of special gifts, but she or he is also respected as a hunter, or a healer, a teacher or a carver, a nurturer of the children. This model reminds us that even the most solitary artist is a worker and a citizen.

Molly Sheridan: In this month’s issue, we’re talking about appropriation, in the largest sense of building on bits of recognizable work that have come before. In a certain sense, since you are not a native Alaskan but have dedicated yourself to it on many levels, you have appropriated your place. And beyond that, you have been asked to write works using various indigenous languages. Do you ever question your “right” to do that, or where the aesthetic/ethical line is?

John Luther Adams: It might be more accurate to say that my place has appropriated me!

It was the wilderness that drew me to Alaska. But over the years I’ve come to know and love this place in ways that extend beyond the physical landscape. As Barry Lopez says: “Landscape is the culture that contains all human cultures.” After living here for most of my adult life I feel closer to the spirit of Alaska Native cultures than to the spiritual culture in which I was born and raised. In Native teachings, everything in the world is inhabited by spirit. The world itself has awareness. And we human animals need to be always mindful and respectful of this spirit in all things.

Whenever my work has embraced themes directly related to Native cultures, I’ve worked with Native collaborators. My collaborators have helped keep the work accurate in factual details and attuned to a proper spirit. Most importantly they’ve brought to the work the dignity of their own presences as bearers of their cultural traditions.

Earth and the Great Weather was commissioned the Festival of Alaska Native Arts. After the premiere, my wife heard an Athabascan elder telling his grandson: “That’s the way it used to be.” A couple of years later when we performed Earth at Anchorage Opera an Iñupiaq man told a newspaper reporter: “I kept going in and out of the spirit world.” In my work I aspire to an authentic resonance of place. So I’ve been deeply touched and honored by responses like these.

One of my most memorable experiences was composing a song to a poem written by my friend Ari Vahan in her native Gwich’in dialect. Ari used the song at a summer camp on the Koyukuk River to teach young children a little of the language of their ancestors. Over the years this song has taken on a life of its own, as it’s been translated into other Native languages and sung in villages from Bethel to Anaktuvuk Pass. I’ve learned much from my Native friends and neighbors, and this little song has completed the circle in a rich and gratifying way.

Molly Sheridan: I was once again struck by how much, not necessarily image, but light, plays into your discussion of the work you do. I know you’re very much enamored with painters. Does that go back to your reading/study there? Or is it more the fact that in Alaska, the light (or lack thereof) takes on more present meaning?

John Luther Adams: The extremes of light and darkness in the North have profound effects on consciousness. Winter and summer, it’s like living in two different places. I think you can hear this in my music. Much of it is quiet and nearly motionless. But some of it is explosive, even violent in an elemental way.

High latitude light is unlike light I’ve seen in any other place. Here in Fairbanks the highest the sun ever reaches is 48.5º above the horizon (at solar noon on the summer solstice). So most of our sunlight is sidelight. The shadows are very long and the colors are saturated.

Snow covers the ground for much of the year, so any available light and color is intensified. Our winter nights are very long, but there’s an extraordinary luminous quality to them. We have nights when the moon turns the whole world a deep saturated blue. And then there’s the aurora borealis. Those spectral shapes and colors in the night sky are simply magic. They never fail to evoke a deep sense of wonder.

Beyond the natural world, I find inspiration in the forms and colors of painting and sculpture. The abstract expressionists and the minimalists are old favorites. And I feel a special affinity with light and space artists, particularly Robert Irwin and James Turrell.

Molly Sheridan: Considering all the time that must have been invested in putting this book together, have you had any time left to plan for future projects?

John Luther Adams: Always. I’ve just finished a concert-length orchestral work in memory of Lou Harrison. And currently I’m immersed in work on The Place Where You Go to Listen—a room I’m creating for the Museum of the North at the University of Alaska Fairbanks.

The installation incorporates light in a very direct way. The south side of the space is a wall of glass 20 feet wide and 9 feet tall covered with translucent scrim that transforms it into a constantly changing field of light and color.

Just as the colored light from these windows is filtered through material scrim, a slow sweep of colored noise is filtered through two harmonic scrims—banks of band-pass filters tuned to the natural resonances of the room. This noise sweep is controlled by the position of the sun above or below the horizon. One of the harmonic scrims is associated with daytime, the other with night. As the noise passes through the scrims, discreet tones emerge and the entire space is transformed into a vibrant resonating chamber.

In addition to these harmonies of day and night we also hear low-frequency “drums” and high-frequency “bells”, controlled by data streams from seismic activity and changes in the earth’s magnetic field, which are associated with the aurora borealis. So in a very real sense the music in this room is “played” by forces of nature, unfolding in real time with seismic waves, geomagnetic weather and the changing light of the sun. The piece has no beginning, middle or end, and it never literally repeats.

All this is changing the way I work. Usually I work from overall sound image to formal conception to the moment-to-moment details of sound. Most of my time is spent composing a score, followed by rehearsal, performance and recording. But this new project demands a new way of working—a process grounded in direct observation, listening in and listening to the physical space of the work.

Like all my work The Place Where You Go to Listen is deeply rooted in a specific geography. But it’s my hope that it will resonate beyond the place from which it comes. I want the work to be more than a simulated experience of the natural world. I want it to be a heightened form of experience itself. 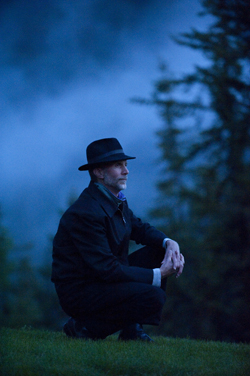