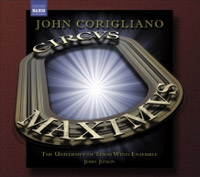 I remember the moment quite clearly: I was walking down the hallway around noon at the University of Texas at Austin, where I was doing my Masters work. Having just eaten, my body began to slip into post-lunch coma; a nap on the comfy couches in the upper corridor seemed imminent. Suddenly my body and mind were reawakened by an enormous burst of noise erupting from the concert hall. To this day, this is the loudest sound I have heard performed by acoustic instruments. It was the opening chord in John Corigliano’s Circus Maximus—Symphony No. 3 for large wind ensemble, a recording of which has just been released on Naxos, performed by the University of Texas Wind Ensemble under the very able baton of Jerry Junkin.

During the performance of Circus Maximus, instrumentalists are spread throughout the concert hall. This spatial arrangement allows Corigliano to create surround-sound effects, place a smaller ensemble offstage, and even at one point have a rather hokey marching band parade around the audience. Experienced live, this effect is striking, especially with many musicians involved (everything is truly bigger in Texas, and the wind ensemble is no exception). Yet, this, along with the sheer volume of the sound, creates a problem for recording, and it epitomizes that no matter how much one likes to listen to music in the home, car, or gym, the concert hall is still the best place to witness this sort of spectacle. Having been at the premiere performance, I can attest to the sheer beauty and warmth this music has in this concert hall. Like other very large ensemble recordings—e.g., the opera recordings of Wagner that to my ear just don’t do the production justice—the shine and luster don’t come through on the disc. And this is no fault of the recording engineer, Richard King, who did an outstanding job taking this surround sound music and making it work as well as possible on a stereo CD. The various spacialized parts are spread around the stereo field to create a sense of space, and yet they maintain the tight feel of an ensemble in front of the listener. It’s just not the same as live performance.

Musically speaking, Corigliano’s classical chops, such as his formidable skills at orchestration, really shine through in this piece. The loud sound masses and noise clusters are incredible, especially when coming from all over the concert hall. Not all composers are able to come up with such huge and rich timbres, especially with an ensemble completely devoid of strings, and yet this piece contains many sonically striking and sometimes shocking moments. Also, the two central slow and soft movements, “Night Music I” and “Night Music II”, are gorgeously orchestrated and wonderfully performed. Set on top of slowly changing drones and percussive webs, the music beautifully floats through the clarinets, horns, and flutes, evoking an evening song somewhere between Bartók and Crumb. The final movement of the work displays Corigliano’s command of classical voice leading and harmony. Called “Prayer”, this five minute chorale succeeds at offsetting the noisy and hectic music found throughout much of the rest of the piece and brings the work to its sonic and emotional climax.

Corigliano might be the American composer most associated with postmodernism, in the sense that the meaning of his music comes out of his referencing of musical material already loaded with social and cultural meaning. In his own words: “If I have my own style, I’m not aware of it. I don’t think of style as the basic unifying factor in music, as many composers do today. I feel very strongly that a composer has a right to do anything he feels is appropriate, and that stylistic consistency is not what makes a piece impressive.” In and of itself, this is a fine idea; however, in the case of Circus Maximus, it is not apparent that Corigliano has an intimate relationship with all that he is using and referencing. Listening to the music, it is clear that Corigliano grew up with large-C Classical music, and is far more familiar with Mahler, Mozart, and Bach than Cage, Coltrane, and Zeppelin. There is nothing inherently wrong with this—one of the basic principles of being an American is that we are all able to choose what we are into and what we are not. In this piece, Corigliano seems to be trying to step out of his classical mold—making a piece that has more to do with his adventurous film score for Altered States than his more traditional Symphony No. 1 and Symphony No. 2 (which, though traditional, have both won major awards such as the Grawemeyer Award and Pulitzer Prize; no such award has yet been given to Circus Maximus)—yet when we dig deep into this music, we see the Classical composer in Corigliano doesn’t quite want to go away, and ends up dominating the resultant musical discourse. Issues then arise when Corigliano tries to reference things out of the large-C comfort zone. The jazz references seem especially forced. The “Channel Surfing” movement also suffers, sounding more like some alternate universe where band, mambo, and circus music dominate the airwaves than anything referencing our own culture. In his own words, when describing his use of Bob Dylan texts for a song cycle from the year before Circus Maximus: “…I had always heard, by reputation, of the high regard accorded the folk-ballad singer/songwriter Bob Dylan. But I was so engaged in developing my orchestral technique during the years when Dylan was heard by the rest of the world that I had never heard his songs.” Without having been immersed in this music throughout his life, the results Corigliano achieves with some of his references are often just not convincing.

Criticisms aside, this piece and recording are still quite simply required listening for anyone interested in the concert band. The work’s enormous sonic pallet and artistic ambitions are something that more band composers should strive for, and hopefully this not only leads to more ambitious composition but also more ambitious commissions by wind ensembles. Furthermore, the performance by the Jerry Junkin and The University of Texas Wind Ensemble is just stellar. It is amazing to think that this is a college group. The ensemble playing is sharp, rhythmically tight, brilliantly in tune…and loud. Loud enough to be worthy of the title Circus Maximus.