[Ed. Note: Well, it’s that time of the year again—The Minnesota Orchestra’s Composer Institute is in full swing in Minneapolis and our tour guide through this year’s proceedings is 27-year-old composer Jacob Cooper. Based in New Haven, Connecticut, where he recently received his master’s from the Yale School of Music and where he currently teaches, composes, and plays bass in the rock band The 809 State, Cooper originally hails from Hastings-on-Hudson, New York, and earned his bachelor’s at Amherst College with a double major in music and geology. Do you detect a rock theme in here somewhere? It’ll be curious to see how many stones he turns over in the Twin Cities. – FJO]

The fact that I went shopping for clothes this past week proves—and my girlfriend and mother can testify—that I know this is going to be a huge seven days in Minnesota. On Wednesday I made the trip to Target (about as indulgent as I get) to buy some decent pants and shirts, and I picked up a new can of shaving cream and some razors as well. The Minnesota Orchestra apparently knows it’s a big week, too. The Institute can’t stop itself from growing: it’s starting a day earlier this year, allowing us to see the orchestra perform a full program on our first night.

I enjoyed a pleasantly uneventful flight on Saturday, save for the confiscation of my new shaving cream (yet not, ironically, the razors that lay next to them). Minneapolis welcomed me with its first rainless day in a couple of weeks and a much higher temperature than it’s known for. After checking in to the hotel, I went out for an early dinner with composer participants Trevor Gureckis, Wes Matthews, and Xi Wang. The first Minneapolis musical experience for the four of us was not one we had expected. As we ate, a saxophonist across the street played through all the autumnal classics: “Silent Night,” “When I Fall in Love,” “Auld Lang Syne,” and that tender ballad “Eleanor Rigby.” We powered through the meal, however, and soon met the other three participants—Dan Bradshaw, Elliot Miles McKinley, and Stephen Wilcox—at the stage door of Orchestra Hall. Aaron Kernis and Beth Cowart, co-directors of the Institute, welcomed us with friendly voices, peanut M&Ms, and some waivers (the first of many hands-on lessons this week related to the business side of composing) and then guided us through the lobby. Simply walking into the hall and seeing the orchestra on stage got us keyed up, picturing them six nights later about to play our music.

The concert program was, in my mind, all one could ask for: a brand new piece and two classic symphonies. Stanislaw Skrowaczewski, conductor of the Minnesota Orchestra from 1968-1979, returned to the podium to conduct the world premiere of his Fantasie per Flauto ed Orchestra, along with Mozart’s Jupiter and Brahms’s 2nd. The Skrowaczewski piece, essentially a flute concerto, boasted an appealing form (several episodes bookended by two cadenzas) and admirably transparent orchestration. The glissandos throughout the piece were particularly well-crafted—glisses are hot right now, and Skrowaczewski showed us why. The Jupiter’s energetic tempi didn’t disappoint, and for me the most mind-opening and beautiful moment of the concert came at the beginning of the recapitulation in the fourth movement of the Brahms Symphony: I don’t think I’ve ever heard orchestral music played so quietly and so vividly at the same time.

At the reception with donors and orchestra staff that followed the concert, Aaron brought us in front of a microphone and asked us to speak about ourselves and our orchestra pieces. I was impressed with how articulate each composer was (even Stephen, who claimed that he is horrendous at talking about himself in front of crowds). As we search for a bridge out of the ivory tower, this ability for composers to connect to an audience verbally in addition to musically seems to be increasingly important, so it’s good to feel like we’re on the right track—and it’s good know that the Institute is helping us move further along it.

After a full night’s rest, we had our first “Composer-To-Composer” meeting this morning, the first of two show-and-tell sessions that will give us the chance to hear each other’s music beyond the pieces on Friday’s program. Dan Bradshaw presented his work Jubilus, an orchestral piece inspired by the ecstatic energy of his daughter (two years old at the time of composition). The Bradshaw toddler had also provided the cover art: an amalgamation of brightly-colored paints that we all initially deemed to be professional art. Next, Wes played us his saxophone quartet, which I admired for its skilled treatment of both the percussive side and the lyrical side of the flexible instrument. Trevor then treated us to two of his songs, the first a beautiful tenor number that somehow overcomes grandiosity with subtlety, and the second a mischievous song for a soprano who, supported by a delightfully busy pair of clarinets, claims she doesn’t recycle and can’t stop thinking about her Firebird. The rest of the composers—hopefully including Aaron—will present later in the week.

Our first official seminars took place in the afternoon. Following an informational session with Craig Carnahan and John Neuchterlein about the American Composers Forum, the experienced musician Mary Ellen Childs doled out some useful advice on grant-writing (by the end of the seminar I was ready to establish a foundation just so I could write her a check). Other knowledge I acquired in the afternoon included learning that Target is in fact based in Minneapolis and is a considerable donor to the orchestra. Perhaps I can weasel my way into getting that can of shaving cream back for free? 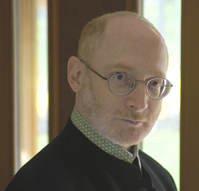