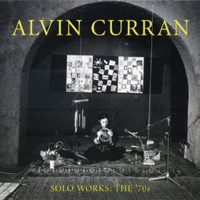 Having grown up with electronic media as a given, it’s hard to comprehend how its advent so fundamentally and irrevocably altered the way we create, disseminate, and experience music. Yet certain terminology that is used to connote different kinds of music-making still persists in an era where music of any kind exists in any place at any time. For example, we separate out “chamber music” from larger-scale music making. The term of course connotes music that could be heard in a room rather than a very large concert hall. Yet nowadays, even without electronic media, chamber music is played in many large halls, and with electronic media it can be listened to anywhere, even while riding a bus or an airplane, and music designed to be heard in very large concert halls works just fine in a small room if it is experienced on a recording.

Another one of these terms, “solo music,” seems less anachronistic, but maybe not. Solo music clearly means music that is created by one person. Historically this meant performance on a single instrument and, in some oddball cases, the occasional one-man band—guitar or keyboard in hand, harmonica or some kind of horn held via clasp in mouth, and foot-operated percussion. With the rise of portable electronic equipment, solo music could also become as immersive an environment as something orchestral. So solo tells you nothing about size or intimacy, only something about how many people are involved in making it.

In the 1970s, Italian-based American composer Alvin Curran created a new kind of solo music which redefined the parameters of music that could be made alone through the technological advances of the day. Outfitted with a wide range of gear (various keyboards, assorted wind and percussion instruments, and playback equipment), Curran created one-man electro-acoustic symphonies in real time. Four of these sonic landscapes were issued on LP on small Italian labels: Canti e Vedute del Giardino Magnetico (Songs and Views from the Magnetic Garden, 1973); Fiori Chiari Fiori Oscuri (Light Flowers Dark Flowers, 1974); The Works (1976); and Canti Illuminati (1977). For a brief while, Magnetic Garden appeared on CD on the Catalyst imprint from BMG, but other than that, these fascinating works have not fared particularly well in the digital era. New World’s lavish issue of all four albums on 3 CDs finally sets these records straight, so to speak. Particular care was put into the program booklet; in addition to extensive newly written essays by both Curran and Joan La Barbara, which put these four of a kind works into historical context, the booklet reproduces all four original LP covers.

But how to describe this music which almost defies logical verbal explanation? Like Curran’s work for acoustic instruments, his electro-acoustic solos meander voraciously from style to style—one minute minimalist then suddenly modernist, then jazz—and yet somehow it all holds together. And because of his ability to morph seamlessly from a solo piano piece to music for other instruments to something resembling musique concrète, these solos are all the more surreal and are somehow unsettling and serene at the same time.

Magnetic Garden is occasionally reminiscent of Iannis Xenakis’s Orient-Occident. But even more so than that 1960 musique concrète classic, Curran’s expansive sonic canvas evokes ancient traditions through contemporary means. Glass and metal chime bonging in gamelan-esque scales, multiphonic singing, insect buzzings, water and gurgles on a VCS3 synth—an instrument used that same year on Pink Floyd’s Dark Side of the Moon—meld together to create an indigenous music for McLuhan’s global village. In Canti Illuminati, Curran’s multi-phonic singing has an even more prominent role. Everything herein, even the environmental sounds, seems to emerge from it. At times, the dense layering of vocal lines hints at strange ritual practices on some remote island. In fact, before his singing begins, electronically generated sounds suggestive of fog horns help take the listener on a journey to this extremely mysterious place. The Works juxtaposes pre-recorded natural and urban sounds with a vocal and pianistic exploration of a pentatonic scale which is the ascent of the North Indian Raga Hemant. It is perhaps the most tonally circumscribed of these four panoramas, but Curran’s improvisational flourishes ultimately have little to do with Classical Hindustani music. These strict melodic limitations nevertheless imbue this music with an exotic and hypnotic energy.

Fiori Chiari Fiori Oscuri might be the strangest one of them all. It begins with a cat purring. Soon there’s a keyboard solo I can best describe as cocktail toy piano. Eventually a non-toy piano takes over playing what feels like a bonafide jazz solo, albeit the kind of polystylistic free-flowing solo that folks like Keith Jarrett and Chick Corea might have played at that time. But then electronically generated sounds come in, and a recording of a little boy counting in Italian. And that’s just the first five minutes. Soon shards of primal flute melodies that are evocative of Sardinian folk music take center stage. Later on everything gets really psychedelic. The little boy and the toy piano eventually return but then everything washes away into another piano solo which gradually builds in intensity to relentless virtuosic cascades of tremolos.

As Curran acknowledges in his program notes, the advent of digital technology turns much of the hard work that went into constructing these solo electro-acoustic works into child’s play, but few such extended solos that are now possible have as much magic and poetry as these four musical marvels.