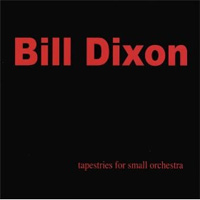 In the middle of a documentary filmed by Firehouse 12 on the making of Bill Dixon’s new album, the trumpeter admits: “Every single day of my life I learn something I didn’t know before about the trumpet.” From his start in the ’60s playing with Cecil Taylor and Archie Shepp to the audacious and seductive records he began making in the ’80s as a leader, there is very clearly a ton that he’s learned about the trumpet in his time. On Tapestries for Small Orchestra, Dixon brings all of this knowledge to bear.

Dixon’s “small orchestra” consists primarily of three timbral palettes: Warren Smith on percussion, Glynis Lomon (cello) and Ken Filiano (bass) on strings, and five trumpeters: Taylor Ho Bynum, Graham Haynes, Stephen Haynes, Rob Mazurek, and Dixon himself (Michel Cote gets the chameleon award for his clarinet work, which seems to be able to blend with any of these three sound worlds at will). The trumpets (and cornets and flugelhorns) are the primordial binding agent; as Dixon notes, “[T]he original genesis of doing this thing [was] to expose the trumpet, and show more of what its capabilities were, without being gimmicky.” He has the five players lay it all on the line: they belch and they squeal, they vocalize and they murmur, they hold tones for so long and with such resplendence that you think your own chest will cleave in two before they take a breath. In the documentary, Dixon gives a session pep talk: “Don’t believe Walter Piston when they tell you what the trumpet can do. The trumpet can do anything.”

The trumpeters note on the video how each individual personality comes out of their horns in a setting like this. And this is true, but it’s also critical to the music that they are able to amalgamate into something bigger than their individual voices. And this is where the great performances elide with the great compositions. Dixon is clearly comfortable using multiples in his instrumentations—e.g., his 1985 release Thoughts uses three double basses to create one of the thickest and most mesmeric sonic foundations of any album you’re ever likely to hear—and his employment of the trumpets on Tapestries exhibits thoughtfulness and imagination on every track.

Indeed—and this is definitely the sign of a mature composer—he isn’t even that eager to reveal his winning hand. The first piece on the set, Motorcycle ’66: Reflections & Ruminations, begins with a slow, almost Mahlerian melody from Filiano before Lomon joins in with sinuous counterpoint. It aches. Smith then joins in on vibraphone while Cote lays down some fat low notes on the contrabass clarinet, and only then, three minutes in, does Dixon start to bring in the trumpets, each, yes, bringing their own personality into the roles as they enter one by one, but also weaving something truly remarkable together. This slow-building rumination on presumed pastimes flows and ebbs, slipping away gracefully to the more excited and individualistic music making at the beginning of Slivers: Sand Dance for Sophia.

For Phrygian II—which might be Tapestries‘ standout track, if not for the fact there are several other deserving candidates—Lomon, Filiano, and Smith go absolutely buck wild on their instruments while the winds envelop their delirious frenzy with a low, soft attack that nonetheless exhibits such pointed power as to completely overwhelm everything else. It’s actually spine-tingling.

Virtually every single selection from this album deserves a detailed exegesis, but it would be criminal to not shine some light on the last track, Innocenenza. Perhaps most remarkable about this one is the way that it’s able to engage with the past, future, and then further past of jazz in that sequence: Innocenenza starts off with four minutes of the kind of mayhem that Dixon learned along with Cecil and Archie in the ’60s, until one of the trumpets begins to get real weird, electronically speaking. Still, the aggression in the music seems to belie the virtues suggested by the title—but then, four minutes before the end, it’s a jazz ballad. Just like that. As with so many of Dixon’s greatest moments on this record, it’s completely out of left field, and completely arresting. It’s the calm after the storm, a supposed innocence that has more to do with veneration than naiveté (Dixon is too thoughtful for anything like naiveté). One of the trumpets glides effortlessly through an impossibly high harmonic series while Smith glances off a narcoleptic melody on the vibes, and the music, all 110 minutes of it, vanishes into thin air.

In short: this is one of the best CDs of the year. Firehouse has done an amazing job with every facet of this release. Some of Dixon’s other albums have suffered from bad miking or production, but there’s none of that here; every instrument is given the space to breathe and create. The liner notes, written by Bynum and Stephen Haynes, are an illuminatingly good read. but most interesting of all supporting materials is the documentary included on the DVD. It’s a small-budget affair to be sure, but carefully poured over. It functions more as a loose collection of anecdotes and teachings than any form of narrative—little explanation is given as to how the project came to be—but Dixon, an unconventional thinker who’s crazy like a fox, is fun and fascinating to watch at work. It is in vogue to renounce physical packaging these days (your humble reviewer being frequently guilty of such), but in this case it’s essentially a requirement—iTunes doesn’t have the documentary (nor, for that matter, the interior artwork, done by Dixon himself).

While Dixon has shown an aversion to many common musical elements in his music—clearly delineated melodies or solos, conventional structurings—one thing he fully embraces is beauty. Taylor Ho Bynum states Dixon’s overarching philosophy: “Listen to the space in the room. If you can’t do something more beautiful than that, shut the f–k up.” Good advice to musicians everywhere.