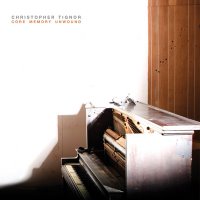 Whether a sincere revelation of self or a purely manufactured construction (all is fair in the pursuit of art, no?), Christopher Tignor’s music tends to hit the ear as an intimate disclosure, leaving the impression that the listener has been given the chance to peer into an unguarded mind. A warm tone, a languid phrase: You’d be forgiven for imagining that the door had been left cracked open, impossible to resist as you pass by.

Where on previous recordings Tignor’s sound was packaged up with the creative voices of his Slow Six band mates, Core Memory Unwound has been released under his own name and features the composer (violin, upright piano, and software instruments) as well as the talents of Margaret Kampmeier (grand piano), and Colin Jacobsen (violin). Though the reduced personnel may make for a more compact live show, as a recording the processing still fills out an aural space much greater than three.

The disc makes a gentle entrance with “Last Thought at Night,” just a piano and violin in fragile dialog offering something of a golden light to welcome the listener in. The next track, “Last Nights On Eagle Street,” is a remix of the previous track’s material created using software (designed by Tignor) that allows for real-time sampling and manipulation. This alternating track pattern repeats throughout the disc, teasing out musical thoughts and gestures, and echoing neatly the premise planted in the album’s title.

Across the disc’s 54 minutes, in fact, you can press your own programmatic thoughts and memories onto the putty of this music and it will hold them—for the moment at least, before the new sounds Tignor continues to pour into the ear encourages them to move along. You can gaze into the impressionistic sound world and feel inspired to trace hundreds of storylines or images, but the sonic terrain provides only a rich space for such imaginings, not the content. There are no words, no program notes. Even the album’s cover art is just an upright piano with the front panel removed. The track titles might betray a certain poetic inclination or point of inspiration on the composer’s part—”Meeting in a Colored Shadow” or “Left in Fragments”—but Core Memory Unwound is not a monochrome block of ambient soundtracking. The music is, in fact, an actively evolving bed of tone and texture that shifts and twists, and yet—possibly simply due to the meditative pacing that often serves as its guide wire—tends to return from these forays to a position of quiet reflection.

For those still comfortable listening through an album start to finish, there is a reward in the seesaw effect Tignor creates with the altering of predominately acoustic tracks with those built on processed sounds, a distinction that blurs and dissolves as the album progresses. The processing sometimes explodes a sound world like a microscope and sometimes fogs it over like a lens slipped out of focus. What is in one moment the gentle gliding of a bird later takes on the fierce dance of a tethered kite. In the final notes of the last track, in fact, the music seems to simply reach up and drift away.