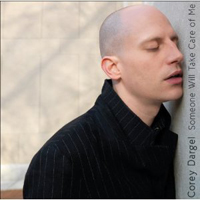 Corey Dargel:
Someone Will Take Care of Me
(New Amsterdam NWAM021)

For nearly a decade Corey Dargel has been making extraordinarily weird musical concepts sound natural and almost mainstream by packaging them as popular songs. Irregular meters and phrases, totalist polyrhythms, and unstable harmonic movement are commonplace throughout his oeuvre. On his earlier self-produced cry those sweet sweet tears on out (2003), he even experiments with alternate tunings. But all of these advanced musical techniques are never ends in and of themselves; in fact, since these devices serve his songs so well, a casual listener might not even realize all of what’s going on in Dargel’s electronically generated song accompaniments. One of his songs—”Boy Detective” (which appears on his initial 2006 commercial release, Less Famous Than You)—is actually as infectious and tune-worm inducing as ubiquitous FM radio fare. It would not sound out of place in rotation with the Human League’s “Don’t You Want Me Baby,” The Cure’s “Friday I’m in Love,” or the Bangles’ “Walk Like an Egyptian.” Yet Dargel’s lyrics usually belie something far more off-kilter than most Top 40 fodder, whether he’s singing about the aftermath of an appendectomy (as in “My Voice Is In Your Head” from his 2009 Other People’s Love Songs) or delightfully exploring unapologetically homoerotic content (as in his “Gay Cowboys,” also from Less Famous Than You). Ultimately Dargel’s pop-song trappings are a façade that lulls you into a false sense of security as a listener; before you know it, you’re bopping your head to a very complex series of beats, humming a melody that doesn’t quite line up with those beats, and thinking about the world in a way that you most likely would never have thought about it before.

But if Corey Dargel’s output has always been the work of a singer-songwriter who engages in heady compositional strategies, he completely ups the ante with the two song cycles that constitute his latest recording, the double-CD Someone Will Take Care of Me: Thirteen Near-Death Experiences and Removable Parts. For starters, rather than arbitrary collections of vignettes (as are most albums of songs), these two cycles are both self-contained larger-scale works which maintain coherent through-lines in terms of their verbal narratives as well as their musical setting—each contain recurring thematic material as well as consistent instrumentation. In fact, an aspect that sets all of this material apart from Dargel’s previous work is its clear allusion to the sound world of “classical” song cycles. The completely acoustic Thirteen Near-Death Experiences exclusively uses the ubiquitous contemporary classical music combination described by insiders as “Pierrot plus percussion”; Pierrot meaning flute (doubling on piccolo), clarinet (doubling on bass clarinet), violin, cello, and piano, since that combo was first used by none other than Arnold Schoenberg in his 1912 song cycle Pierrot lunaire. And Removable Parts is scored—as are the great Romantic song cycles of Franz Schubert and Robert Schumann—for voice and piano, although Dargel’s approach is stubbornly 21st century. An electronic soundtrack of pre-recorded sounds, among them those of the piano, is added, and there are multiple vocal tracks. As Dargel admitted in an email correspondence in preparation for this essay, “It felt like too much of a statement to jettison all electronics.”

To further align his music with the realm of “contemporary classical” music, Dargel is joined on these recordings by new music pianist Kathleen Supové for Removable Parts, and by composer-percussionist David T. Little and members of the International Contemporary Ensemble, a.k.a. ICE, for Thirteen Near-Death Experiences.

The lyrics for Thirteen Near-Death Experiences explore hypochondria in a variety of manifestations: paranoia about mortality, assumptions about the real cause of acne, and dysfunctional doctor-patient relationships—a crush-driven patient who keeps going to a doctor in the hopes that he will be paid attention to in a more than medical way. Removable Parts delves into even stranger subject matter. Each of the songs explores voluntary amputation.

Some specific analytical details for a few of the songs should give you some idea of how Dargel treats these subjects musically. While stably in G major, “Ritalin” (from Thirteen Near-Death Experiences)—in which stunted growth (both physically and emotionally) is blamed on the prescription drug—is exclusively in the stunted meter of 11/8, a cycle that is a beat too short. Dargel somehow makes this unwieldy rhythm flow, even groove, with Reichian maracas and despite even the occasional oddball syncopation—a repeated four-note melodic phrase that is gradually elongated over the course of 25 beats. The tender and introspective “What Will It Be for Me” (two songs later) achieves its mystery, at least in part, by overlapping irregular subdivisions of 3, 5, and 7, which completely punctures and unhinges the otherwise regular 4/4 meter. It’s the kind of metrical fancywork that abounds in contemporary scores ranging from Morton Feldman to Elliott Carter, but rather than resulting in unsettling angularity or disjointedness, it is always stunningly beautiful. It is also completely diatonic, ostensibly in C major, although a clear functional tonal pull is obviated by a lack of clear dominant-tonic progressions.

“Toes” (from Removable Parts), perhaps the first song ever to describe dealing with someone’s discomfort with a foot fetish by amputating digits, has one of the most deceptively simple accompaniments. Almost like the intuitive diatonic music that Christian Wolff was composing in the early 1980s, the voice and piano spurt out extremely simple, but rhythmically disjoined and not always synchronous melodies. There are no additional sounds besides the voice and piano until about 2/3rds of the way through when the intrusion of disturbing rotary phone dials and Casio-like gurgles add an element of macabre surrealism. The virtuosic “Fingers” (which immediately follows) is in F# major and 7/8 throughout, a key and rhythm which, ironically, are particularly tricky for fingers to play. To make matters even trickier, the goal in performance is for the pianist not to make a sound. The pianist wears finger splints throughout and is instructed to “tap dance” gently on the keys; any struck tones are accidental, the result of striking keys too hard. Instead, the keyboard sounds that are audible to the listener are those of a harpsichord (triggered by a sampler) and a monophonic synthesizer.

Despite how effectively the words and music flow together throughout both of these song cycles, Dargel attests that he created the accompaniments for all of this material before ever coming up with any of the vocal melodies or lyrics. In fact, he claims that is how he has created all of his songs over the past decade. This approach is the exact opposite of the intuitive processes of most guitar or keyboard based singer-songwriters who traditionally create a song first and then later devise an appropriate accompaniment. But perhaps this level of pre-determination strikes to the heart of what makes Dargel a “composer, singer, songwriter” rather than a “singer-songwriter.” It is telling that this triple moniker, with composer first, is how Dargel identifies himself on his website.

It might initially seem extremely anachronistic—especially to people who subscribe to the notion that barriers between musical genres no longer exist except in the minds of marketers—to draw a distinction here between singer-songwriters and composers. And clearly from a semantic point of view if you are writing the music as well as the lyrics for songs you are writing music, although if you are a composer you are not necessarily writing songs. However, a schism between songwriting and composition still exists in the minds of a great many songwriters as well as the large number of composers who do not actually write songs. In addition, it is a very different activity to create something for your own performance (whether songs or solo instrumental compositions) and material that is meant to be played by, ideally, anyone other than yourself. It is akin to the difference between subjective and objective writing, first vs. third person narration. Plus songs tend to be more immediate to most listeners because of their (usually) relative brevity, intimacy (because of—again usually—relatively pared down instrumentation), and directness (due to the use of words in addition to music). Therefore to ask whether someone’s conceptual frame of reference is that of a singer-songwriter or a composer is not an unreasonable question. And most of the time it’s pretty easy to tell who’s who, including in the case of Corey Dargel. His output heretofore has always consisted of songs, albeit extremely complex and unusual ones. And what he has written up to this point is less related to contemporary composition than it is to the comparable achievements of the most sophisticated auteurs in popular music from Stevie Wonder and Joni Mitchell to Tori Amos and Sufjan Stevens. The overall sound and impact of his oeuvre, as well as its performance practice, heretofore has clearly aligned him with singer-songwriter tradition, despite the rigorous processes he has used to create his songs and despite his own extremely articulate, if somewhat polemical, manifesto demarcating the boundaries of popular music, the art song tradition, and contemporary “artsongwriters.”

But with Removable Parts and Thirteen Near Death Experiences, Dargel is doing much more than writing extremely well-crafted songs. He is creating larger arcs of meaning, both musically and lyrically. As further testimony to the larger scale of these endeavors, both Removable Parts and Thirteen Near Death Experiences began their lives as theatrical presentations. Their manifestation on New Amsterdam’s two-CD recording is not necessarily their definitive context. In fact, the theatrical version of Removable Parts is considerably different than the commercially recorded version; it is nearly twice as long in live performance, and features spoken dialogue as well as cover songs not included on the CD. The fact that there are multiple versions of Removable Parts out there in the world makes the present recording just one of many possibilities for this piece.

One of the key distinctions between writing songs for one’s own use (in live performance or recordings) and creating notated compositions is that those compositions can have performance histories well beyond the involvement of their creators. Despite his involvement of other performers in order to realize these two song cycles (which are both completely notated), Corey Dargel the performer—the singer-songwriter—is clearly still the centerpiece of these performances and his vocals are as completely mesmerizing, in best singer-songwriter fashion, as they have always been. But could or should these two song cycles ever be performed without him? How different would such a realization be? In a recent email correspondence, Dargel claimed he would be comfortable with other ensembles performing the instrumental parts, but he is not yet willing for someone else to sing:

When my singing voice weakens with age, as almost all singing voices do, I’ll consider letting other people sing the songs, but for the time being I believe my physical voice and my compositional voice are intertwined.

So perhaps this pair of song cycles, though Dargel’s most compositionally-oriented work in all of his output to date, is singer-songwriter material after all! Ultimately Removable Parts and Thirteen Near Death Experiences can be listened to, analyzed, and appreciated on a variety of levels, like the most enduring music of any genre.