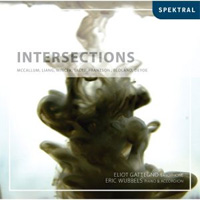 In the musical ghetto inhabited by the classical saxophone, a high premium is placed on technical prowess and unabashed instrumental wizardry. It’s a strange world where über-nerdiness actually breeds a weird form of testosterone among its most dedicated disciples. So it says a lot about a young artist when he blatantly chooses to eschew the profusion of gimmicky pieces designed to stimulate the cognoscenti in favor of assembling a program with an aesthetic that would be decidedly unpopular among the majority of up-and-coming saxophonists in degree programs throughout the country. On Intersections (SPEKTRAL), saxophonist Eliot Gattegno is less concerned with impressing his peers than being a medium for the voices of seven composers.

Gattegno spends a good chunk of time on the album lending his talents in the service of works that make use of some of the saxophone’s more unconventional extended techniques. In Memories of Xiaoxiang, a work for alto saxophone and electronics, Lei Liang doesn’t cast the instrument as a protagonist, but rather as an additional layer that augments and interacts with the electronic part. Sinuous glissando figures played with the mouthpiece alone evoke the wails and sighs of a grieving woman while slap-tongued notes mingle with the sounds of a plucked guzheng. Davíð Brynjar Franzson’s The Closeness of Materials, a compact work for alto saxophone and accordion, recalls John Zorn’s The Classic Guide to Strategy, a seminal album of game calls, mouthpieces alone, and other extra-instrumental exploits. Though Gattegno works only with a fully assembled alto, he conjures an impressive array of timbres while also demonstrating that even a guy who plays a lot of serious music can have a sense of humor.

Score excerpt from Per Bloland’s Quintet, for saxophone and electronics
Among the album’s many intriguing works is Per Bloland’s Quintet for alto saxophone and electronics, which is less of a composition than a vehicle that empowers the performer to create a multi-layered conversation with himself. (Full disclosure: Bloland originally wrote this piece for me.) The score suggests the overall shape and material the performer is to work with but allows for a great deal of latitude with regard to the actual sounds that are produced, leaving that up to the performer’s improvisational whims. A Max/MSP patch records, plays back, and transforms the material generated by the live performer into one of the more successful and least self-conscious interactive works I’ve heard. For many classical saxophonists, nothing reveals timidity and apprehensiveness quite like being asked to improvise, but Gattegno holds his own admirably, summoning shapes, sounds, and squawks from the likes of experimental saxophone heroes Evan Parker and John Zorn.

In addition to works that explore extended techniques, Gattegno also has a penchant for music with a directness of expression. The piece on the album most emblematic of this aesthetic is Clint McCallum’s savagely intense in a hall of mirrors waiting to die. The opening portion of the work is dominated by a searing held note in the soprano saxophone’s upper register punctuated by sharp figures delivered with primal ferocity by Eric Wubbels on a prepared piano. The intensity of the opening gradually gives way to a sparser, more atmospheric middle section. Throughout the performance, the interplay and coordination between Gattegno and Wubbels is stunning. Equally stunning is the majority of Alex Mincek’s Perpetuum Mobile II for two tenor saxophones (with Mincek as the second saxophonist) and accordion, which sounds like a demented calliope that short-circuits from time to time. One of the more interesting facets of the work is the way you’re lulled into its homogeneity to such an extent that when the three instruments break ranks you become more hypersensitive to the composite lines being created than if the instruments were set up as separate voices from the start of the work. However, although the work has an abundance of compelling qualities, it unfortunately suffers from an affliction mostly endemic to experimental improvisation, which is the inability to recognize when something has gone on for too long. In other words, a little editing would have gone a long way.

It’s sometimes the case that performers who choose to specialize in music emphasizing extended techniques and uncompromising aesthetics are attempting to hide certain flaws and ineptitudes in their playing. Eliot Gattegno is not that kind of performer. Throughout the album he demonstrates an undeniable command of his instrument and a keen imagination. But most importantly, he shows that he plays the music, not the saxophone.


Baltimore-based saxophonist Brian Sacawa curates the Contemporary Museum’s Mobtown Modern music series. He also performs in the genre-bending duo Hybrid Groove Project and has been known to drop the hammer in bicycle races throughout the Mid-Atlantic region.