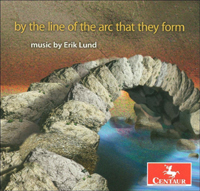 Erik Lund: by the line of the arc that they form
Centaur (CRC 2992)

Erik Lund’s compositions take listeners beyond music, deep into the intersections of art forms and ideas. His 2009 CD, by the line of the arc that they form, which features five works composed between 1997 and 2007, demonstrates how much he defies the popular notion of new music as self-absorbed and disconnected from life. In these works—commissions of the Arditti String Quartet, the Crash Ensemble (Dublin), flute-cello duo C2 (Lisa Cella and Franklin Cox), bassist Michael Cameron, and pianist Janis Mercer (although aftermath is performed here by David Psenicka)—he proves himself not only a composer of searching chamber music, but of thoughts worth the same concentrated attention the sound compels.

Lund’s music is highly literate. The words he uses in his titles name content and they also point to inspiration in speech or text for his musical forms. This happens in Blessed B, which refers to the Beatitudes from the Gospel According to the Matthew in the New Testament, and in dalla linea dell’arco che esse formano (the Italian original of the CD’s title), which is a line from Italo Calvino. In descent, debris, debrief, the prefix that unites a group of words inevitably suggests that their meanings line up.

All the performances are electrifying, particularly the Arditti Quartet’s performance of the title work in which the bows seem to have been replaced with knives and chisels. And the sound engineering is exceptional, leaving no impression of any interference between listeners and the performances. I mention the sound quality because it is particularly critical for a composer like Lund, who writes music with spare textures. He is not melodic, nor indulgent of complex harmony. His work is intensely episodic, which is part of its deep link to language. Lund’s music can be rhetorical, declamatory, conversational, or prayerful: His works in this collection suggest the lines, rhythms, and dynamics of speech, whether or not words ever suggest themselves to the listener.

In Blessed B, for instance, here executed on the vibraphone by Steve Butters (it was written originally for steel drums), Lund notes that his composition contrasts “strong statements and humble yet penetrating introspections.” Surely without this note, the music would be identified with speech simply because of its strong linear motion, its phrasing, and the particular sequence of dynamics changes. As an effective orator or preacher practices a delivery that changes in mood and rhythm, so this work proceeds by contrasts of brightly resonant, bell-like pealing; measured, carefully punctuated statements; and musings so gentle that the listener leans in to catch them. Like all of the works on this disk, Blessed B is not built on a repeated structure, but on an impulse that drives it to a conclusion we are always certain is coming: We know we will not be left dangling (despite its mysterious ending).

Yet this is no mere wordless transcription of the Beatitudes. While preserving the cadences of speech, Lund controls emotion and suggests idea by shifting tempos that variously race and pause. He places widely reverberating tones against dry, clipped ones; and introduces a variety of ostinato lines. Thus, we might imagine a speaker taking action and others acted upon. We hear the delivery of inspiration, and of doubt; we can imagine beauty in the soul and the dissonance it can cause when translated to action. Through music, Lund delivers a well-known sermon. But he loosens and expands the parameters for its interpretation by letting the listener remember—or confuse, or forget—the actual words. Music expands the text by moving it beyond the verbal.

Missing Intelligence, performed by the Crash Ensemble—violin, clarinet, piano, double bass, and percussion, all amplified, with computer-processed sound added—is twelve minutes of swarming, pounding, running, and crackling tension: It is an experience impossible not to react to physically. Time and again, the music mounts dynamically, tonally, through tempo and rough techniques to levels of fury, yet without ever establishing a core motif or sound sequence. For all that, the piece drives itself along to a conclusion on sheer momentum and passion. When it runs its course, we’ve been through a tornado—through a battle—the center of which turns out to have been a void.

The work refers to the “missing intelligence” of American leadership that allowed for the commencement of the Iraq war, which was fought, too, on the basis of “missing intelligence.” Lund has constructed this piece around just that emptiness. This is his special technique, and similar to his accomplishment in Blessed B: He emphasizes the ghost, the absent subject, by writing music that invokes the subject’s field, either of associations or of debris.

The title work, dalla linea dell’arco che esse formano, for the Arditti String Quartet, provides another idea central to Lund’s composition in the image of the bridge. In his notes, Lund writes that the line in Invisible Cities refers to “the shared importance of both the whole (in this case the arc of a bridge) and its parts (each stone in a bridge).” And so musically, the work is formed on a linear span created from multiple, massed parts. This piece holds the central position on the CD. It is in every sense the collection’s keystone, revealing central principles of Lund’s composition and outlook found in all the other works.

Dalla lineaâ€¦ was composed in 1999 and Missing Intelligence in 2006, but though the two are similar in compositional technique, they are different in their effects. Dalla lineaâ€¦ is as warm and personal as Missing Intelligence is cold and chaotic. But both are formed along lines created by single, high pitches held seemingly endlessly. In Dalla lineaâ€¦, this extended pitch forms a span along which sonic events gather in the forms of antic pizzicato or harmonized masses of intense bowing, like gathered stones of many sizes. In Missing Intelligence that sustained pitch initiates the constant, nerve-wracking tension throughout which irregularly placed tonal explosions are detonated.

While by the arc of the line that they form demonstrates Lund’s excellence as a composer and the vitality of his music, it also reveals how deeply he is engaged with the world as an artist and citizen. In addition to the works mentioned above, aftermath refers to the 9/11 catastrophe, and conflict resolution reflects on the possible meanings of that oxymoron.

Lund’s interest is in finding a means of expression for thought about experienced reality. His music and his reflections are involved, specific, and passionate. For him, thought is action; composing is ethical action, and his music is meant to be effective in our shared world.