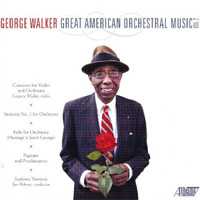 George Walker has been composing distinctive and highly crafted music for seven decades. And while he has received scads of prestigious accolades—e.g. commissions from the Boston Symphony, the Cleveland Orchestra, the New York Philharmonic, and the Philadelphia Orchestra, a Pulitzer Prize, and membership in the American Academy of Arts and Letters, etc.—he has been far from a household name and much of his output has not been readily available on commercial recordings.

But in the past few years things have started to change, largely through the composer’s own sheer force of will. Last year, at the age of 87, he completed his autobiography, Reminiscences of an American Composer and Pianist (published by Scarecrow Press). And over the past few years he has been supervising definitive recordings of his music which have been issued on a series of CDs on the Albany label. I’m particularly drawn to the Son Sonora Quartet’s performances of Walker’s two string quartets, which are very different from each other, on a previous disc in this series. The present disc, Great American Orchestra Music Volume 2, is the series’ latest installment and offers five works composed during the past two decades in committed performances by the Sinfonia Varsovia under the direction of Ian Hobson. Overall the disc perhaps makes the most compelling case for a broader advocacy of George Walker’s compositional output. Maybe if we had a mainstream media that actually paid attention to a truly broad range of music, George Walker could become a household name.

For me the real treasure trove is Walker’s Violin Concerto, which I found thoroughly engaging on first listen and even more rewarding in subsequent hearings. From the very opening in which the solo violin almost sneakily emerges out of a timbrally complex thicket to the lyrical middle movement to the resoundingly conclusive, albeit non-tonal, final orchestral tutti chord, this is extremely dramatic music. It’s also a testimony to Walker’s continuing compositional powers—it was completed in 2008 and only first performed this past December. Even though this sort of thing should be business as usual, it’s an extremely rare treat to have a commercially available recording of a new work only three months after its premiere. Another treat is to have a performance so close to the source: the soloist is Gregory Walker, Walker’s eldest son for whom the work was written, a composer in his own right who is a particularly sensitive interpreter here.

The other works are also compelling. The somewhat neoclassical Sinfonia No. 2 from 1992 is reminiscent of pre-19th century symphonic norms despite its unapologetically modern harmonic vocabulary. A collection of three relatively short movements, it is actually much easier to fit onto an orchestral program than most contemporary American symphonies. And like the Violin Concerto, this is also a work filled with dramatic momentum and vivid orchestrational details. The interaction of solo winds, with grouped brass, strings, and orchestral piano in the concluding movement is particularly exciting.

Foils (2005), which would make an excellent concert opener, is an emotional roller coaster alternating passages of introspective tranquility with raucous outbursts. These extremes are perhaps even more pronounced in Pageant and Proclamation (1997), a work which contains direct quotes from “When The Saints Go Marching In” and “We Shall Overcome,” although they’re not patently obvious. However, a reference to “We Shall Overcome,” which still remains an instantly identifiable to most people more than 40 years after it served as an anthem for the Civil Rights movement, is particularly apt in a recent composition by George Walker. Indeed, after decades of neglect, his extraordinary music, too, is starting to overcome as well.