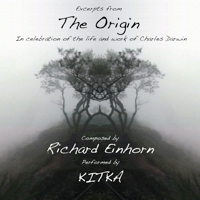 Directly from the composer

At a trim 33 minutes, the album version of Richard Einhorn’s The Origin (an evening-length multi-media piece built up around the life and work of Charles Darwin) focuses on just six excerpts scored for vocal soloists, drawn from the full production which also includes chorus, orchestra, and projected film. This paring down serves to neatly focuses the action on a collection of powerfully intimate moments in a life that came to influence the thinking of much of the global population.

Excellently performed by Kitka, an Oakland-based women’s vocal ensemble whose style is rooted in Eastern European techniques and influences, the group traverses the range of dramatic situations with technical skill and remarkable emotional depth.

Einhorn’s writing balances the touch of mystic spirituality such vocal works tend to carry to Western audiences with moments of humor and pathos. Rhythmic layering built out of repeated words and phrases brings particular life to the songs, whether in the intricate recitation of a series of port locations in “Voyage of the Beagle” or in warring arguments for and against marriage in “This is the Question”. In “Annie’s Memorial,” Einhorn captures a nostalgia containing both the sadness of loss and the celebration of a young life—Darwin’s 10-year-old daughter—over too soon.

This is rich musical storytelling with audible nods to the vocal work of Meredith Monk and the tales in song brought to life by composers such as David Lang in his The Little Match Girl Passion. The Origin, however, stands out for its rhythmic play and the range of sentiment it contends with in just this brief outing. Using Darwin’s own words (as compiled by Einhorn and the poet Catherine Barnett), the piece considers travel, marriage, originality, profound tragedy, and the human impact of awe-inspiring discovery.

Kitka’s strong performance further animates the proceedings with a healthy dose of inspired whooping and vocal percussion, not to mention their highly realistic bird calls and jungle scene setting. And when the topic turns to popping beetles into one’s mouth as an impromptu storage container, their collective “Ewww!” connects deeply with the listening audience at home! It also puts fresh gloss on the tune’s refrain, which suggests that “a taste for collecting beetles is some indication of future success in life.”