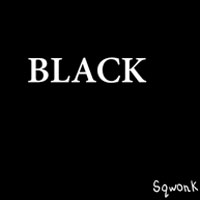 Music for multiples always has the potential to reveal the superhero characteristics of the featured instrument. Piano four hands! Four drumsets! Two 12-string guitars! Cello octet! It’s perfect territory for composers craving the aural illusion of extra notes, thick timbres, and never-ending strings of melody. There is also great potential for quirkiness, from active imaginations vamping on whatever-the-instrument-may-be on steroids, or what might happen if it could suddenly fly. The bass clarinet-wielding San Francisco-based duo Sqwonk, comprised of Jeff Anderle and Jonathan Russell, dive into both the supercharged and the potentially off-the-wall nature of instrument multiples with their CD Black.

Contrary to the title of this disc, there is little darkness in the music presented beyond the dusky timbres of the bass clarinets in their low range. In fact, the duo writes in the liner notes that the CD title describes “…exploding a universe of bass clarinet power out of the inky black void.” Featuring seven newly commissioned pieces, many from composers who are clarinetists and/or saxophonists themselves, Sqwonk is on a stated mission to create a body of exciting new work for bass clarinet duo.

Mark Mellits’s title track Black bursts on to the scene with vigorous interwoven syncopated lines that collide into unison figures, and take quick switchbacks that reveal different musical material. Knee Gas (On) by Ryan Brown puts the pedal to the metal with similar but even more relentlessly propulsive lines starting out in the low range of the bass clarinet and gradually progressing into higher territory.

The third track provides breathing space after the rigorous 16th-note patterns of the previous two works. Sojourn of the Face by Cornelius Boots begins quietly with a slow-moving chord progression that transforms the clarinets into a bagpipe. The music develops a wacky, narrative quality that begs a silent black-and-white movie as accompaniment. The range of technique and timbral variation in this piece testifies to the composer’s progressive rock background and his study of shakuhachi flute.

Dan Becker’s Better Late returns to the driving syncopation and the melding of two bass clarinets into one, this time with increased harmonic motion and variety. In James Holt’s well-crafted Action Items the two instruments move on separate yet related paths, always complimenting one another. Bandleader and composer Aaron Novik laces Strict9 with jazz-tinged melodies and soaring solo lines, while Undo by Gutbucket-frontman Ken Thomson provides the big finish with pulsating, raunchy music that strives to shove the earphones off your head.

Anderle and Russell form a solid musical partnership—their playing is technically strong and very tight, and they balance one another effectively. The production of this recording is slick, with a close-mic’ed sound and plenty of spatial definition between instruments, giving the impression that the listener is located smack front and center between performers. Although there could be more variety in the style of music offered—and after watching live performances I can safely say that the duo is most certainly capable of handling a broader range of styles—Sqwonk clearly has a preferred flavor of Reichian/Bang On A Can-style interlocking grooves and driving rhythms that will likely appeal to a wide audience.