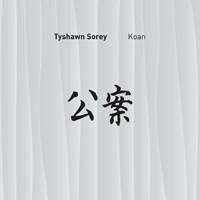 Just a month after its end, post-mortems on 2009 are pretty dated. Nonetheless, I will aver that in our little corner of the music world, last year stood out most prominently as a year of notable jazz records, distinguished not only by their quality and novelty, but by their vast ambitions: Vijay Iyer’s Historicity received the most year-end accolades, but there was also Steve Lehman’s Travail, Transformation and Flow, Darcy James Argue’s Infernal Machines, Bill Dixon’s Tapestries for Small Orchestra, Henry Threadgill’s This Brings Us To, Vol. 1, and Peter Evans’s Nature/Culture, amongst others. Tyshawn Sorey’s Koan, a trio CD recorded last year with bassist Thomas Morgan and guitarist Todd Neufeld, deserves mention alongside any of these albums.

Sorey first came to most people’s attention with his ear-catching playing on Iyer’s 2003 album Blood Sutra. As a drummer, Sorey is beguiling to an extreme: in his work with Iyer, Lehman, and others, his tight, complex, shuffling beats are accomplished not only at hypersonic speeds, but with an incredible musicality as well. Compositionally, however, Sorey’s own music seems to exist on a whole other planet from what he plays as a sideman. This was first demonstrated on That/Not (Firehouse 12, 2007), his first (double) CD. To call Sorey’s compositional style “Feldman free jazz” is way too reductive, but it has a lingering truth—the soft and dissonant intervals, the stillness of the music certainly invokes the late work of that great composer, but there are additional layers of influence everywhere. Cumulatively, you’re not quite sure what you’re hearing; Tyshawn may be an aggregator of influences, but the end result is unquestionably new and interesting, not an uncomfortable union of streams but a new way of looking at a set of musical issues.

Back in October, Tyshawn premiered a new piece of his, For Kathy Change. Divided between two sets, the piece itself clocked in somewhere in the vicinity of 90 minutes, with Sorey performing piano and percussion (occasionally concurrently), accompanied by Ben Gerstein on trombone, Terrence McManus on guitar, and Okkyung Lee on cello. In the glacial harmonies and long-breathed rhythmic cycles—broken a few times by good old-fashioned free jazz free-for-alls—one could hear Sorey really reaching for new heights, even more so than the freshly minted record I was there to speak with him about. In between sets I caught up with him to discuss his work on Koan, and where he’s going from here on out.

Trevor Hunter: Anyone who is most familiar with your work as a sideman is likely to be pretty surprised when they approach your work as a composer. The frenetic virtuosity of your playing in those contexts is pretty much abandoned for what’s actually a rather reflective, timbrally controlled compositional approach. Is what you’re doing in your own music a reaction to your work as a sideman, or is it just something you’ve always been truly interested in?

Tyshawn Sorey: It’s something that I’m interested in. I’d say it’s more of that than it is about being an answer to a compositional problem or a listening problem associated with creative improvised music. I mean, I respect every projection that comes out of the music. These are just things that I’ve become interested in, and this comes from stuff I’ve experienced growing up. [For instance,] the topic of linguistics is one thing that is of interest to me; the concept of homophony. For example, you’re having two distinct events that sort of sound the same but they’re not exactly the same. Also, dealing with listening problems: what is the difference between this note and this note? Even though they may sound the same to the listener, when you look at it on paper it’s different. So I’m interested in investigating these different problems myself. And because my playing as a drummer is featured on so many other recordings, I felt that for myself it was best to do a recording on which I represent myself as a composer.

Drummers who are composers, I don’t think they get the full respect of what they deserve to get, so what I’m looking to do is to help to change that a little bit. Essentially the idea is to perhaps have the audience celebrate every aspect of the drummer-composer-performer, as opposed to just the drummer himself. Because that’s just one aspect of what he does. I mean, I know so many different drummer-composers who don’t have ample opportunity to present their work just because of their sideman responsibilities. And I’m not looking to necessarily fight that, because I enjoy being a sideman as well. But at the same time I’d like also to be recognized equally, if not more, as a composer than a drummer.

TH: One of the most interesting things about Koan is definitely the minimizing of your performative input, as compared to the other two players. It definitely seems like a very deliberate aspect of the record, that it serves to highlight your compositional techniques over your virtuosity as a drummer.

TS: It’s just one of those things that I’ve always been interested in—like, what does it mean to be a drummer without necessarily playing the role? Am I a drummer anymore? These are the type of questions I tend to ask myself. And in both That/Not and Koan there are several tracks in which I do not play.

What I’ve come to realize is that the drums are becoming less and less and less important in my music. Even as you heard tonight, in my new piece that I’ve premiered here, For Kathy Change, there was very little drumming in the composition, because I don’t really consider it as important anymore. I think what I’ve become interested in more is the inspiration that comes from what the musicians are doing. It helps to encourage me to play, and I think very carefully about how I choose to contribute to situations.

There was one gig that I did with Samuel Blaser’s group, just recently, out in Switzerland—it was this really amazing experience—where neither Todd [Neufeld] nor I played a single note for about an hour [laughs]. And to me, I felt that it was necessary, because it really contributed another element to the performance, I thought, that we haven’t really explored before. These are the things I tend to gravitate to, perhaps questioning the idea of being a drummer, or being a virtuosic musician, or being a composer. I try to let all of these things inform myself as a person, and as a musician as well.

TH: Since you mentioned not playing anything for an hour, the new record has a sort of extreme sparseness to it, even more so than what was present on That/Not. What caused you to scale back your sound world even further?

TS: It’s just something I heard [laughs]. I didn’t really go into it with any particular style or any particular objective in mind. I wasn’t necessarily looking to scale back my work, but I’m just looking to basically extend my way of playing. And I think in a CD like Koan, it has really helped me discover some things that I hadn’t discovered in That/Not. That is, more the use of overtones, and the use of different things you can get out of a drum kit without necessarily hitting the drum hard. I tend to look at the acoustical properties associated with the instrument. This is something that Koan has gotten me to really investigate more, and I’ve become more interested over the course of time since the recording of that to explore these things.

So it was just something that came to me, I guess. I never really set out a certain system. I tried to eliminate this whole systematic way of composing, and a systematic way of drumming, and things like that, and just let the music kind of come on its own, and develop out of its own volition. And this is how I like to let my pieces develop too. Let the ideas kind of begin and end where they should as opposed to me forcing them to begin and end where they should. It’s more cyclical in that sense.

TS: We do it! [laughs] Wherever the music goes, it goes, you know? We kind of develop it together. I don’t look at myself as “the composer,” per se. All I do is bring Todd and Thomas, or bring the musicians I work with, the framework—particularly for this recording, Koan. I mean we’ve taken this music, and we did all kinds of things with the music together, most of the time spontaneously. Things on the recording were spontaneously decided; I didn’t want to go in with the music over-rehearsed or anything like that. I wanted all of us to develop it, and let it happen as it goes.

We basically went into the studio with only one day of rehearsal. And corrections in the score were made, all kind of things were done the same day that we recorded Koan. So I not only look at the music developing out of its own volition, but also the whole unit, all of us—we become the music, I guess you could say. We try to make it as flexible as possible, and I’m all about the flexibility when it comes to my music for sure. And this is where I talk about system, where the form has to be this, and it has to be that, and it has to go this way, and it has to go that way; with Koan, I chose not to do it that way. I wanted to see how the three of us could develop that stuff together.

TH: You’ve displayed an impressive degree of ambition in your young career, in terms of the achievement of a diversity of artistic objectives. Going forward, what are your grander goals?

TS: My grander goals are, for one, to record as much of my work as I possibly can. Because as I’ve said before about the drummer-composers, they’re not gaining the respect that they deserve. I’d like to be one of the people who can bring something to the table that says, “Yes, we are composers, and we do know music!” [laughs] “We do know the piano. We know theory. We know how to write music.” So I’m looking to do that, and that’s a great deal of ambition right there, just to try to even attempt to do that, it’s so much work. And at the same time, as far as my own work goes, I’d like to just keep developing my approach to composition and how things can develop by themselves. And with the pool of musicians that I’m working with, they’re open to any particular approach that I choose to take. So what I look to do is to continue to work with them and to continue to find whatever ample opportunity to present as many of my new pieces as possible.