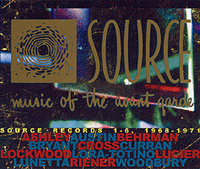 I was a freshmen at Columbia University when I first became aware of Source: Music of the Avant Garde, a new music magazine from the late ’60s and early ’70s. Most issues also contained a 10″ LP. (Some came with two.) And one issue even included a piece of fur on one of the pages—I don’t quite remember why, but at the time I thought it was really cool. In its multimedia approach, Source was something of a prototype for web magazines, existing in a world decades before there was an internet and tenaciously realizing an alternative mode of presentation that to this day remains ahead of its time. Source, truth be told, helped inspire NewMusicBox, but it remains a tough model to aspire to. To this day, we still haven’t figured out how to publish fur on the web.

The post-Fluxus conceptual music featured on those Source LPs—which included the first music I ever heard by Robert Ashley and Alvin Lucier—was light years away from the new music being promulgated at Columbia in the early 1980s. Listening to these records was somehow an act of rebellion and self-discovery. The name Alvin Lucier had been booed during a seminar I attended, and a classmate of mine received a D on a paper in her electronic music class for writing about Robert Ashley. If new music was able to be that provocative, I wanted in.

Ironically, there was a complete set of Source at the Columbia University Music Library, so the antagonism toward this material could not have been completely universal, even there. But try as I might, I was never able to acquire my own set. At the time, I had no idea how rare these publications were; I was even able to convince one of the music librarians to let me borrow one of the recordings to air on my radio show on Columbia’s WKCR-FM. Years later, I saw original editions of Source fetching high triple digits on eBay, which scared me away.

Thankfully, in what must be one of the most significant reissues of the past decade, all of the recordings which originally appeared in Source have finally made it to CD in a generously packaged and annotated 3-CD set from Pogus. It was great to finally rehear some old favorites like Robert Ashley’s still confrontational Wolfman (an extended exploration of microphone feedback) and the original 15-minute version of Alvin Lucier’s process music classic I am sitting in a room. The latter is generated from a recording of a short speech by Lucier which is then played back into a room and re-recorded and then the recording of the recording is played back and re-recorded etc., until all you hear are a series of resonant frequencies. (I still remember playing that Lucier recording on my radio show much to the horror of someone I was training to run the sound board at the time who doubted that it was music.)

The other “spoken word” piece, English Phonemes, by Turin-born-and-based Arrigo Lora-Totino (the sole non-American represented among these recordings), is a collection of recorded speech fragments at the edge of comprehensibility which the composer describes as a “verbophony.” New Zealand-born, upstate-New York-based Annea Lockwood’s Tiger Balm (1971) begins with a recording of a purring tiger (a sound that should be familiar to any cat owner) over which other sounds—some produced by musical instruments, other not—are gradually layered on top of each other. About seven minutes in, the sound of a woman having an orgasm emerges seamlessly from the sounds of animals breathing and then recedes, just as seamlessly, into the sound of an airplane. It’s pretty provocative stuff, and it made it onto vinyl a full four years before Donna Summer’s “Love to Love You Baby” got banned from the radio airwaves. The piece makes for quite a listening experience, though probably not ideal for walking around town with a Walkman or iPod.

My favorite memory of rummaging through all of original Source material back in the ’80s was seeing a photo of a gleeful Lockwood standing next to a piano that was on fire—the infamous Piano Burning which makes her Tiger Balm seem downright tame by comparison. The original Source did not include a recording of this notorious piece, so of course there’s no recording of it on this re-issue. I know it’s completely unfair of me to be disappointed by this, but I am anyway. I’ve been desperate to hear it ever since I saw that photo and I’m not willing to sacrifice any piano I’ve ever had access to in order to do so. However, two other pieces which are featured on these recordings completely redefine piano music in other ways: David Behrman’s Wave Train (1966) explores what happens when you put a bunch of guitar microphones on the strings of a grand piano and then raise the gain. Accidents, by Source‘s co-editor and mastermind Larry Austin, is just that: a pianist’s attempts at depressing the keys of a prepared piano without making a sound are foiled by having each accidental sound magnified with a ring modulator and various other devices. (The Source reissues also include an early piece of computer music by Austin, Caritas, which was realized on the PDP-10 computer music installation at the Artificial Intelligence Project in 1969.) Allan Bryant’s Pitch Out (1967) generates its sonic material from bizarre Rube Goldberg-type contraptions involving a bunch of mandolin and electric guitar strings mounted on boards with magnetic pickups.

Magic Carpet is a performance on the objects in Paul Klerr’s room installation, String Structures, by composer Alvin Curran in 1971. While the experience would be further enhanced by being able to see Klerr’s installation (luckily there are a couple of photographs on Curran’s own website), the sonic component is indeed a magical forest of sonorities. Similarly, by presenting only the audio component for Lowell Cross’s Musica Instrumentalis: Video II (B)/(C)/(L) (1965), a multimedia work in which “visual and aural images are produced simultaneously and independently,” the real essence and intent of Cross’s work is somehow subverted, although I have no memory of the video component of the piece from my original exposure to Source, so the magazine probably couldn’t and didn’t reproduce it either. The audio material that is featured is nevertheless extremely compelling—a gradually morphing drone that sounds like a great deal of the music being made these days.

But the real joy for me has been rediscovering some pieces that I had completely forgotten over the past quarter century. The score for Mark Riener’s wacko Phlegethon (1970) consists of instructions for suspending a piece of polyethylene from the ceiling on a wire coat hanger and then setting it on fire; at least there’s a recording of something getting burned up here. And it’s remarkably musical—it ultimately comes across as a rogue uncle to Judy Dunaway’s subsequent balloon music explorations from the past two decades. And moosack machine (1971), by Source‘s other co-editor Stanley Lunetta, feels like a bizarre progenitor of both Throbbing Gristle and Merzbow, although I seriously doubt that it was on either’s radars. Arthur Woodbury’s hypnotic Velox (1970) sounds like a fugue which takes as its subject James Tenney’s For Ann (rising), although I know from Woodbury’s explanation (reprinted in the reissues’ extensive program notes) that it isn’t.

Pogus’s reissue of all of this iconic Source material will hopefully introduce another generation to this uncompromising sonic rebellion.