About 35 years ago, a psychic told me that I had a “talent for organization.”  I looked at her like she was crazy.  Did she not know that I was first and foremost a musician, finishing my coursework for a DMA in piano, with a minor in composition?  I was insulted and appalled, associating “organizational talent” with the corporate world of gray business suits, balance sheets, and indoor 9 to 5 jobs – everything I had rebelled against my entire life.  I could certainly imagine a future job teaching piano at a university, but the idea of any kind of “organizational” occupation gave me hives.

I associated “organizational talent” with the corporate world … everything I had rebelled against my entire life.

But here I am, retiring after 34 years as co-founder and artistic director of the new music group Network for New Music; and, looking back, I have to admit that the experience of putting together (yes, “organizing”) that first proto-Network concert of new music with my musician friends in 1983 was intoxicating and, ultimately, addicting.

Back in 1984, when NNM was incorporated, the venerable Relâche Ensemble was the only non-academic new music group in Philadelphia. In the opinion of Joseph Waters (Network’s co-founder) and myself, there was room for a new game in town.  Joe and I originally ran Network as a membership organization, in order to generate funding through dues (thus the name “Network”).  When Joe left for the West Coast after two years, I dropped the membership format, as it required the programming of many works that were embarrassingly bad in exchange for composers’ membership dues.  As I began programming music by more recognized composers, I realized that the quality of my own, incipient compositional efforts could not compare with other music on Network programs.  At that point I concentrated on becoming the best pianist I could be, while running the organization, finishing my DMA, rehabbing a house in a sketchy section of Philly, and enjoying the early years of motherhood.

Like many startups, Network relied on the generosity and enthusiasm of participating musicians and composers, all of whom were paid peanuts for their work.  Excitement was high, and so were performance standards. What money there was always went first to the musicians.  As Network achieved middle age in the early 2000s, the board and staff realized that support for a strong organizational infrastructure, including union-scale wages for performers, was necessary for NNM to sustain itself over time.  This was a crucial period for Network, and a point at which many young organizations falter and die.  But I am happy to report that NNM continued to grow and prosper.

As NNM matured, artistic and institutional collaborations became more important, both as an opportunity for composers to deepen and expand their work and as a means of attracting wider audiences. Always somewhat of a purist, I originally came to the collaboration table with doubts.  I resisted anything that would interfere with my own, very personal experience of the music.  However, I was soon persuaded that deep, intentional cross-disciplinary collaborations could produce legitimate and meaningful new art.

I personally felt a natural affinity for music/dance projects, as both took place in time and dealt with movement, rhythm, and phrasing.  I am proud of Network’s early collaborations with dance groups, including: a partnership with (the then-named) Phrenic Ballet which led to the creation of new choreography for Vincent Persichetti’s King Lear (the original Martha Graham choreography was lost); a full-length concert work, with music by Robert Maggio, choreographed by the Leah Stein Dance Company; Lung-ta, the Windhorse, composed by Andrea Clearfield with dance by Group Motion and art by Maureen Drdak; and various new dances responding to commissions by Lee Hyla, David Ludwig, James Primosch, Chen Yi, and others.

I am equally proud of the many other collaborations Network has fostered across disciplines, including with: the visual arts and artists (Barnes Foundation, Pennsylvania Academy of the Fine Arts, The Print Center, the Philadelphia Museum of Art); poets in NNM’s ongoing Poetry Projects (Sonia Sanchez, Stephen Berg, Trapeta Mayson, Frank Sherlock, Beth Brandt, Stephen Dunn and many others); and with composer/video artists Maurice Wright and Gene Coleman.  Many “Aha!” moments experienced by artists and audiences during these projects outweighed the messy challenges inherent in the process of putting them all together.

Also meaningful to Network were in-depth explorations of the works of renowned composers (Bernard Rands, John Harbison, Milton Babbitt, Elliott Carter), as well as a three-day festival of electro-acoustic music and whole programs devoted to the music of other countries: Great Britain, Korea, Japan, and Italy. 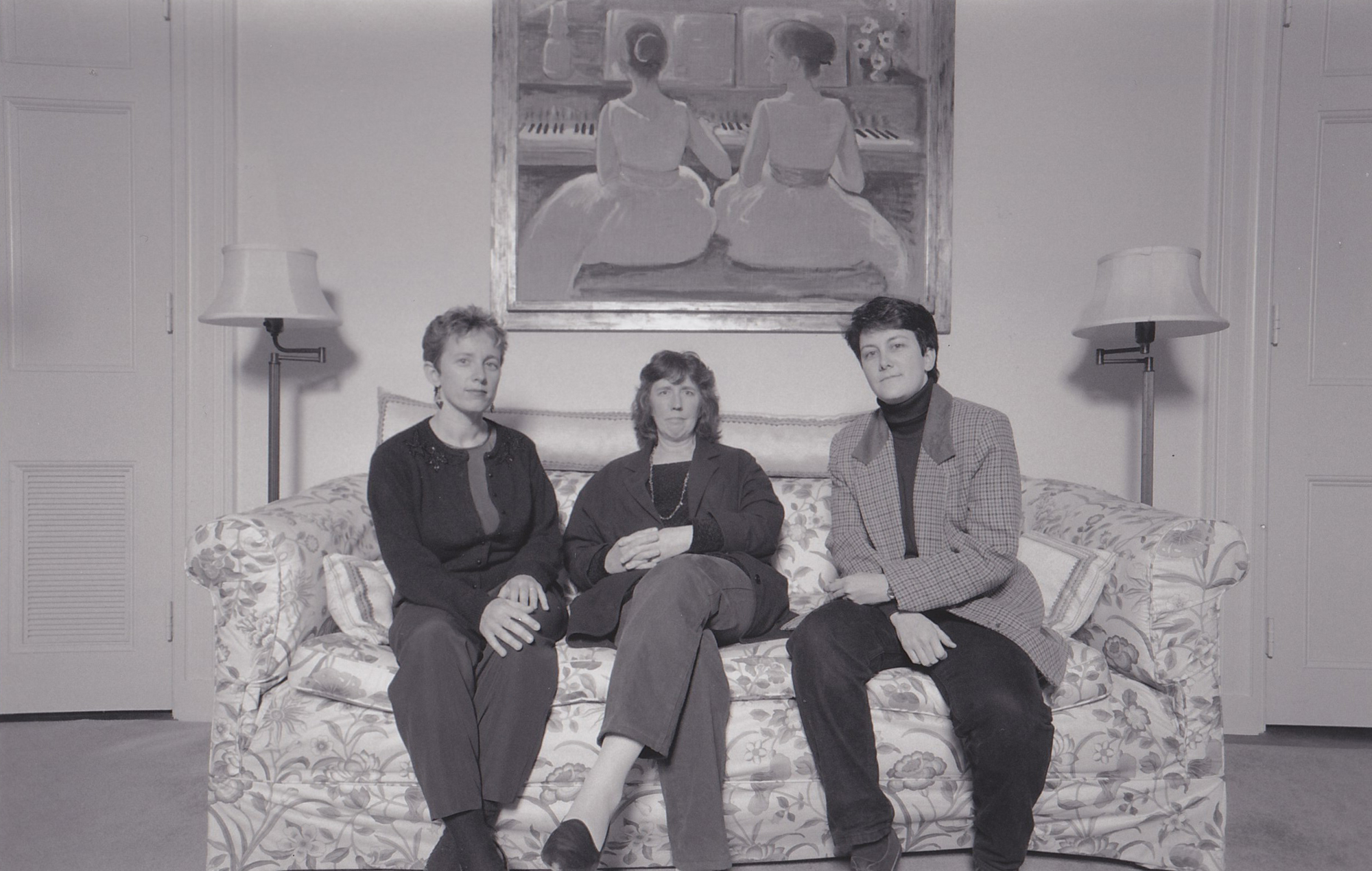 Through it all, I have always been something of a connector for myriad ideas about programming, guest artists, venues and collaborations.  I think I was able to consider the (often exceedingly strong) artistic opinions of others—including the views of Network’s excellent advisory board—while also trusting my instincts about curating programs that encompassed a wide variety of styles.  I got a lot of feedback from audience members, through conversations and online surveys, and I did not think I was doing a good job unless listeners exited a concert loving some works and really disliking others.

I did not think I was doing a good job unless listeners exited a concert loving some works and really disliking others.

Network for New Music has played a big part in the integration of new music into the broader cultural community in the Philadelphia region.  NNM began championing new music and composers at a time when this music was segregated from the rest of the classical concert- music world, and associated almost entirely with the academy.   Network helped to coax this music out of the silos and into the mainstream.  Nowadays, new music can no longer be called “classical”, and it can be heard online and in every corner of the community – from libraries, subway stations, and firehouses to outdoor parks and public squares.  Composers are brilliantly promoting their own music (and they care if you listen) and often performing it as well.  Younger composers and musicians naturally breathe the air of collaboration and connection, and new ensembles are springing up everywhere, with impressive levels of performance.  My hope is that many of these fine groups can make it through the “middle age” period, and mature into sustainable organizational models that can provide their players with stable living wages.

My own tastes have evolved to be broader and broader over time. If a work has “a voice” and achieves, on a high level, what it sets out to do within the context it creates for itself, I am all for it, whether it moves me or not.  The only music I cannot bear is music that bores me, which is usually the result of some form of brain-numbing predictability.  I am so viscerally irritated by boring music that I sometimes start audibly muttering to myself in the concert hall.

I am so viscerally irritated by boring music that I sometimes start audibly muttering to myself in the concert hall.

So, what remains of an organization after a co-founder/artistic director leaves a group she directed for 33 years?  (Jan Krzywicki, the wonderful Network Ensemble conductor, tells me I might be the longest continually-serving new music A.D. in the country; it would be interesting to know if this is a fact.)  The organization either gracefully closes up shop, or a transition takes place.  After a deep and valuable discussion, which forced us to even more clearly define and articulate the relevance, purpose, and viability of our mission, Network board and staff decided the organization should continue forward under new artistic leadership.

Here are some of the reasons for our decision to carry on:

In sum, Network’s core values and reputation for organizational and artistic excellence guarantees it will survive and prosper well after the exit of its current artistic leader.

And so, we began a thorough, two-year succession process.

I look forward with great excitement and interest to the new directions and vision Thomas Schuttenhelm, NNM’s soon-to-be artistic director, will bring to the organization and to the Philadelphia community.   Thomas – a fine performer, composer, author and educator from Hartford, Connecticut—is thrilled to be joining the Network team; he and I will work together for several months to ensure a smooth transition.  After that, I look forward to having time to again explore and play dead composers’ music (Bach and Beethoven), volunteer for a yet-to-be-identified environmental organization, learn Italian, and continue my work toward achieving a handstand, independent of a wall.

At the end of my Network tenure, I am already feeling the loss of the inspirational relationships I have so enjoyed with Network musicians, composers, board, and staff.  But I am also filled with pure gratitude for the huge opportunities I have had to work with these fine human beings, especially those amazing composers, who somehow fashion beauty out of thin air, translate it into markings on a page, and trust that musicians like those in the Network Ensemble will bring this music to life, moving hearts and minds in the process.

[Ed. Note: Sunday, April 29, 2018 at 1:30pm, Network for New Music will honor Linda Reichert with a catered benefit concert at the Settlement Music School in Philadelphia that will feature world premieres by Andrea Clearfield, John Harbison, Jennifer Higdon, James Primosch, Bernard Rands, Augusta Read Thomas, Melinda Wagner, Richard Wernick, and Maurice Wright as well as a reprise performance of an earlier Network premiere by Michael Hersch, and a performance of a work by Gareth Haynes, the winner of the Network Student Composition Competition. Since capacity is reached, ticket sales will end on April 27 and there will be no tickets at the door.—FJO.]