The close proximity of the BMI Student Composer Awards, the American Academy of Arts and Letters Ceremonial, and the American Composers Orchestra’s Underwood New Music Readings, which all took place in New York City last week, have turned the penultimate week of May into a multi-day celebration of new music.

On May 21, the BMI Foundation celebrated the nine winners of the 2019 BMI Student Composer Awards.

On May 21, the BMI Foundation, in collaboration with Broadcast Music, Inc. (BMI), announced the nine winners of the 2019 BMI Student Composer Awards at a private ceremony held at Tribeca 360° presided over by BMI Executive Director of Classical and BMIF President Deirdre Chadwick, BMI Senior Vice President of International and Global Policy Ann Sweeney, and renowned American composer and permanent Chair of the Student Composer Awards Ellen Taaffe Zwilich. Marco-Adrián Ramos Rodríguez received the William Schuman Prize, awarded for most outstanding score, and Lucy McKnight received the Carlos Surinach Prize, awarded to the youngest winner. Another one of the 2019 winners, Matthew Schultheis, received his third consecutive award this year. In what has now become an annual tradition, prior to the announcement of the award winners, an award-winning work from a previous year was performed in its entirety. The Aizuri Quartet performed Carrot Revolution composed by Gabriella Smith which received a BMI Student Composer Award in 2018.

Here is a complete list of the 2019 award winners:

Marco-Adrián Ramos Rodríguez (b. 1995): Toys in a Field for orchestra

Matthew Schultheis (b. 1997): The Temptation of Saint Anthony for chamber ensemble

Anna-Louise Walton (b. 1991): Basket of Figs for flute, clarinet, and voice

Alexandra du Bois, Jeremy Gill, Shawn Jaeger, and David Schober served as preliminary panelists this year. The final judges were Kati Agócs, Donald Crockett, Stephen Jaffe, and Elena Ruehr. (More information about each of the 2019 award-winning composers and their works is available on the BMI website.)

Eighteen composers received awards during the 2019 American Academy of Arts and Letters Ceremonial and three composers were inducted as new members.

On May 22, the annual American Academy of Arts and Letters Ceremonial took place during which numerous awards were given to writers, visual artists, and composers and new members of the academy were inducted.

Composers Chen Yi and Meredith Monk were inducted as the newest music department academicians. In addition, Cuban composer Leo Brouwer, who was unable to attend, was inducted as a foreign honorary member.

Four Arts and Letters Awards in Music (formerly Academy Awards) of $10,000 each, plus another $10,000 toward the recording of one work, are given annually to acknowledge a composer who has arrived at his/her own voice. The 2019 awardees are David Fulmer, Stacy Garrop, Wynton Marsalis, and John Musto. Elizabeth Ogonek was the recipient of the 2019 Walter Hinrichsen Award, established by the C. F. Peters Corporation, which is given for the publication of a work by a mid-career American composer. Gity Razaz received the $10,000 Andrew Imbrie Award, which has been awarded annually since 2012 to a mid-career composer of demonstrated artistic merit. Christopher Cerrone and Reinaldo Moya were the two 2019 recipients of the annually awarded $15,000 Charles Ives Fellowships which are awarded to young composers of extraordinary gifts. In addition, $7500 Charles Ives Scholarships were awarded to six composers—Ryan Lindveit, Sato Matsui, Paul Mortilla, Tanner Porter, Marco-Adrián Ramos Rodríguez (BMI’s 2019 William Schuman Prize winner), and Miles Walter—for continued study in composition, either at institutions of their choice or privately with distinguished composers. Two Goddard Lieberson Fellowships of $15,000, which are given annually to young composers of extraordinary gifts, were awarded to Travis Alford and Daniel Bernard Roumain. Finally, two musicals received 2019 Richard Rodgers Awards for Musical Theater: Bhangin’ It by Sam Willmott (music and lyrics), Mike Lew and Rehana Lew Mirza (book); and The Lucky Ones by Abigail and Shaun Bengson who wrote the music and lyrics and also co-wrote the book with Sarah Gancher.

In addition, composer David Del Tredici delivered this year’s Blashfield Address, a speech toward the end of the award announcements which is a hallmark of the Ceremonial. Del Tredici’s talk, “The Gift of Gayness: A Tell-All,” was provocative, heartfelt, and often extremely funny.

(A complete list of the American Academy of Arts and Letter’s 2019 award recipients in every discipline is available on the Arts and Letters website.)

Six composers were featured in the 2019 American Composers Orchestra Underwood New Music Readings, three of whom have received commissions to write new works for ACO.

Finally, on May 23 and 24, American Composers Orchestra, under the direction of Seattle Symphony Music Director Ludovic Morlot, read through works by six composers during the 28th Annual Underwood New Music Readings at New York University’s Frederick Loewe Theater. The six composers and their works are:

Following the readings, three of the composers received commissions for new works that will be performed on future ACO concerts: Jack Hughes received the 2019 Underwood Commission, Aaron Israel Levin received the 2019 Audience Choice Commission, and Jihyun Kim received the Consortium for Emerging Composers Commission. The Underwood Commission was chosen by the mentor composers and the conductor. The Audience Choice Commission, which is now in its 10th year, was determined by paper ballot at the run-through performance on May 24. The new Consortium Commission was chosen by ACO Leadership and Alabama Symphony Orchestra/American Youth Symphony Music Director Carlos Izcaray and the resulting work will be performed by the Alabama Symphony Orchestra and American Youth Symphony (Los Angeles) in addition to ACO. 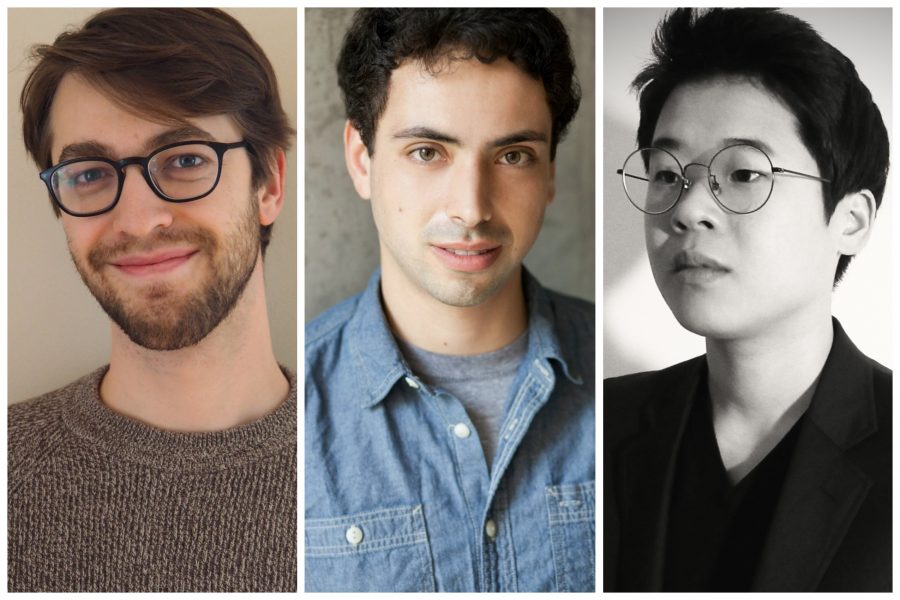 (More information about the 2019 Underwood New Music Readings and the six composers being featured this year is available on the American Composers Orchestra website.)