One of the most representative ensembles of Chinese traditional music engaged in cultural exchange today is the Chinese Bamboo Flute Orchestra (中国竹笛乐团). The group was founded by one of the leading performers on the bamboo flutes dizi (笛子) and xiao (箫), Zhang Weiliang (张维良). In its five years of existence, the orchestra’s work has been substantial. It has commissioned and promoted the music of living composers. It has used modern technology to innovate the design and subsequent construction of new dizi. It has also increased competency of Chinese musicians in playing in non-traditional ensemble settings. And, finally, in addition to protecting and innovating Chinese traditional music, the orchestra has raised the profile of Chinese music internationally.

The Creation of a Dizi Orchestra

To form an orchestra of dizi is a remarkable idea given that Chinese instruments are soloistic by nature. Traditional mixed chamber ensembles are largely homophonic, or feature only one of each instrument to a part. Even in more modern groupings such as the Chinese folk orchestra, one would only find a handful of dizi at most. Hu Biao (胡彪), the ensemble’s conductor, and members Wang Meng (王猛) and Lee Juncheng (李浚诚) all affirmed that in creating this new vessel for dizi, the goals at the Orchestra’s founding in 2013 were educational as well as to build a new body of a repertoire showcasing the instrument.

Zhang Weiliang is an expert on the history and development of the dizi as an ensemble instrument, and I had the opportunity to speak with him at length about the subject this past April. According to him, the instrument was primarily used for Chinese opera, xiqu (戏曲), accompaniment and for accompanying solo performances prior to the 1950. He recounted that:

Starting in the 1950’s, with the joint efforts of the senior bamboo flute experts and the musicologists represented by Feng Zi Cun (冯子存), Liu Guan Le (刘管乐), Zhao Song Ting (赵松庭), and Lu Chun Ling (陆春龄), the bamboo flute began to develop rapidly as a solo instrument. At the same time, the rise of the solo bamboo flute led to the start of the development of the bamboo flute ensemble music.

While performer-composers at this time began to arrange and write more works for dizi, including dizi ensemble, this repertoire faced several problems:

Firstly, most of these bamboo flute repertoires are mainly based on studies, and so are not suitable for use as concert pieces. Secondly, these ensemble types are mostly dominated by duos and trios, and the number of pieces involving ensembles of quartet or more are extraordinarily few. In addition, from the perspective of the size of the repertoire, dizi music from these settings plays a less important role for the instrument than solo work.

These [early ensemble] pieces were regarded as simple and had one part, always giving priority to bamboo flutes as a monophonic melody instrument. Furthermore, in the pedagogy for many years, bamboo flute performers have over-relied on solos as the primary teaching content. There are only a handful of educational pieces involving duo, trio, or quartet in the profession. Through investigation, it was found that there had hardly ever been a special concert focused on the form of a bamboo flute ensemble before the establishment of the China Bamboo Flute Orchestra. By comparison, everywhere one looks, there are countless forms of concerts for Western string music and wind music both domestically and abroad. When there have been Chinese bamboo flute ensembles, it has been only as a part of the concert, rather than as a feature in and of itself. On the whole, the development of the bamboo flute ensemble now lags behind that of the solo repertoire. Therefore, the goal [of the Chinese Bamboo Flute Orchestra] is to use the bamboo flute as a medium to integrate and connect Chinese music with contemporary world music, thereby forging contemporary Chinese music that can adapt to the development of world music, culture, and art. This goal is the same and has not changed!

Recently, other performers of Chinese traditional instruments have begun to create multi-instrument ensembles of this sort. Composer Wenhui Xie (谢文辉), a collaborator of the group, gives credit to Zhang Weiliang’s initial vision for beginning this trend and also for his unique approach, noting in a May 2018 email exchange:

Soon after, there followed the emergence of a Huqin Orchestra (胡琴乐团), a Pipa Orchestra (琵琶乐团), a Sheng Orchestra (笙乐团), a Yangqin Orchestra (扬琴乐团), and others… They all have similar problems and are constantly exploring. However, I feel that in the creation of new works, Professor Zhang’s artistic taste is very refined, and thus encourages composers to boldly innovate, not at all stopping them from constantly trying out all categories and styles of musical expression. In the past five years, he has been original in the selection of the repertoire for each concert, including both down-to-earth arrangements (refreshed versions of music from the traditional repertoire), and also very experimental work. He assembles an array of bamboo flutes and other instruments and voices, and combines these together with multimedia elements or electronic music.

Tuning was a major issue for the orchestra at the beginning, as traditional Chinese music does not focus on harmony and does not necessarily require strict adherence to pitch.

To change the performance setting of an instrument — whose techniques and characteristics have been shaped to such a large degree by it — has accordingly required adjustments to the instrument itself. For instance, the dizi’s characteristic timbre is provided by a thin reed membrane, di mo (笛膜); when assembling twenty or thirty dizi at once, it was found to be too overwhelming for all instruments in the orchestra to use it. Additionally, as there were previously no bass bamboo flutes, Zhang Weiliang began to commission lower models which could provide registral balance. Tuning was a major issue for the orchestra at the beginning, as traditional Chinese music does not focus on harmony and does not necessarily require strict adherence to pitch. Intonation has been improved by having performers play one-to-a-part, and through the performers’ increased exposure to and familiarity with contemporary works. The results of these changes have meant that the members of the ensemble are also more prepared in their engagements as solo musicians. 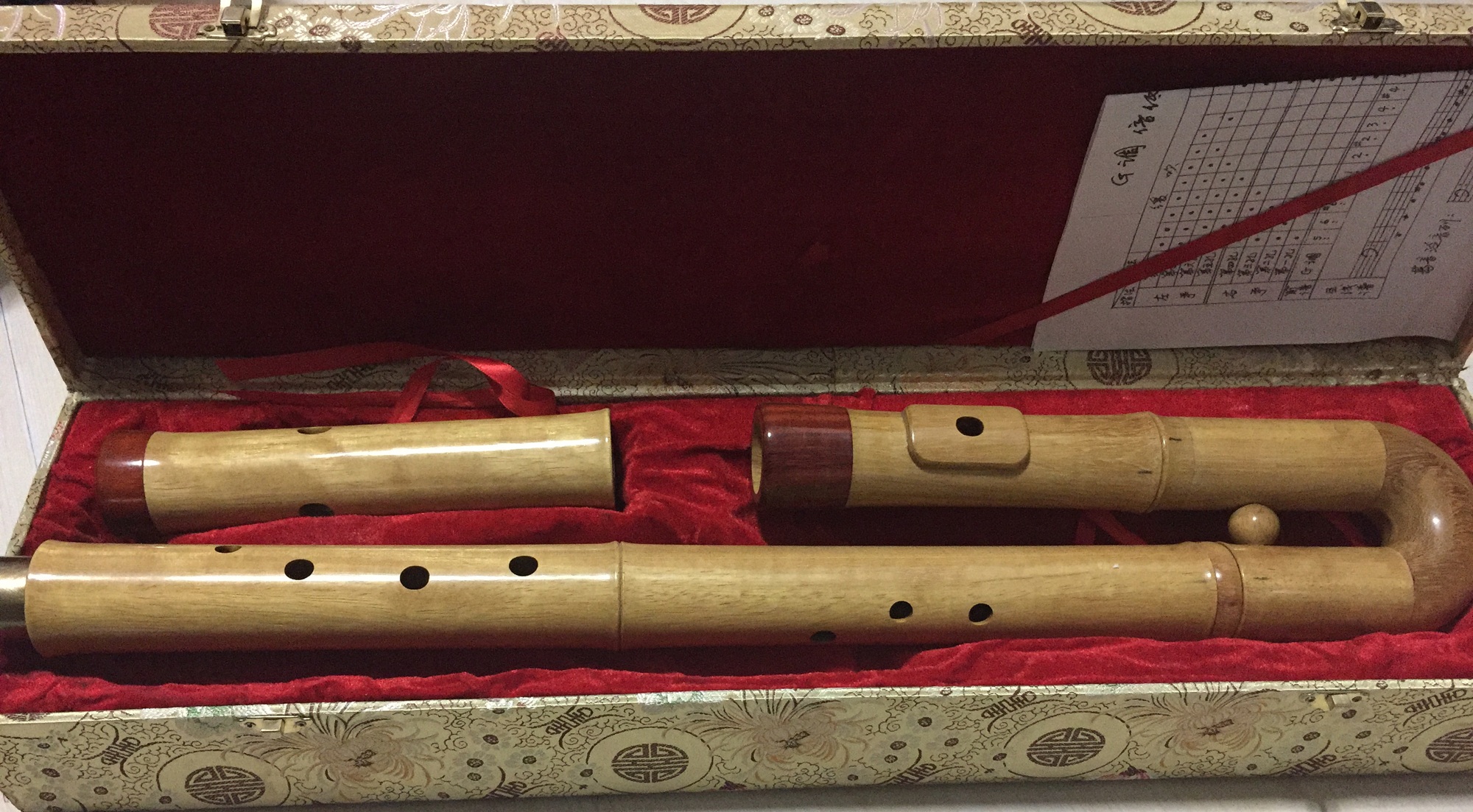 A lower-ranged Chinese bamboo flute (photo by the author)

Bringing Dizi to the World Stage

Zhang Weiliang and other core members of the group share a common goal: they want dizi not to be seen as some sort of “minority music” relegated to the world music CD shelf at the back of the library, but to be taken just as seriously as any of the instruments in a Western orchestra.

Five years into the group’s journey, the steps being taken to ensure this are impressive. They have made commissioning and performing new works and arrangements a cornerstone of their activities due to their unique instrumentation. Zhang Weiliang is himself an accomplished composer and so understands the importance—and the excitement—of presenting new music. To this end, the orchestra has performed and commissioned works from many Chinese and international composers, including Cui Quan (崔权), Zhang Jian (张建), Yang Qing (杨青), Guo Wenjing (郭文景), Wenhui Xie (谢文辉), Gao Ping (高平), Joel Hoffman, and Kohei Nishikawa (西川浩平).

Perhaps Zhang’s greatest example of exchange can be seen in his relationship with American composer Joel Hoffman.

Perhaps Zhang’s greatest example of exchange can be seen in his relationship with American composer Joel Hoffman, whom he has commissioned to write several works for dizi orchestra and for smaller chamber groupings featuring dizi and xiao. The most recent performance of one of these works, Xiang He Ge (相和歌), took place this fall at the National Centre for the Performing Arts (国家大剧院, NCPA) in Beijing by Zhang Weiliang and guitarist Yang Xuefei (楊雪霏):

A further video, from the premiere of Hoffman’s work sizzle at NCPA in November 2015, can be heard here in a performance by the Chinese Bamboo Flute Orchestra, conductor Hu Biao, violinist Benjamin Hoffman, and cellist Natania Hoffman:

In addition to bringing forth new music for dizi, the question of audience engagement is a central concern for Zhang Weiliang. Even within China, many people do not seek out Chinese traditional music; if they do, they might be more inclined to hear guqin or guzheng before dizi due to its forthright timbre. In the orchestra’s push to reach new audiences, they have toured extensively within Mainland China as well as in Hong Kong, the United Kingdom, France, Germany, and Japan. In August 2018, they will commence on a tour of five Eastern European countries.

Even within China, many people do not seek out Chinese traditional music.

Details of the concert experience have also been considered from early on. Two large-scale multimedia events have integrated lights, electronic music, and video imagery alongside dance to create immersive experiences which introduce Chinese instruments to new audiences. The following image, like the one at the top of this article, was taken from the orchestra’s most recent multimedia concert in January of 2017, Call of the Ancient Past (远古的呼唤). 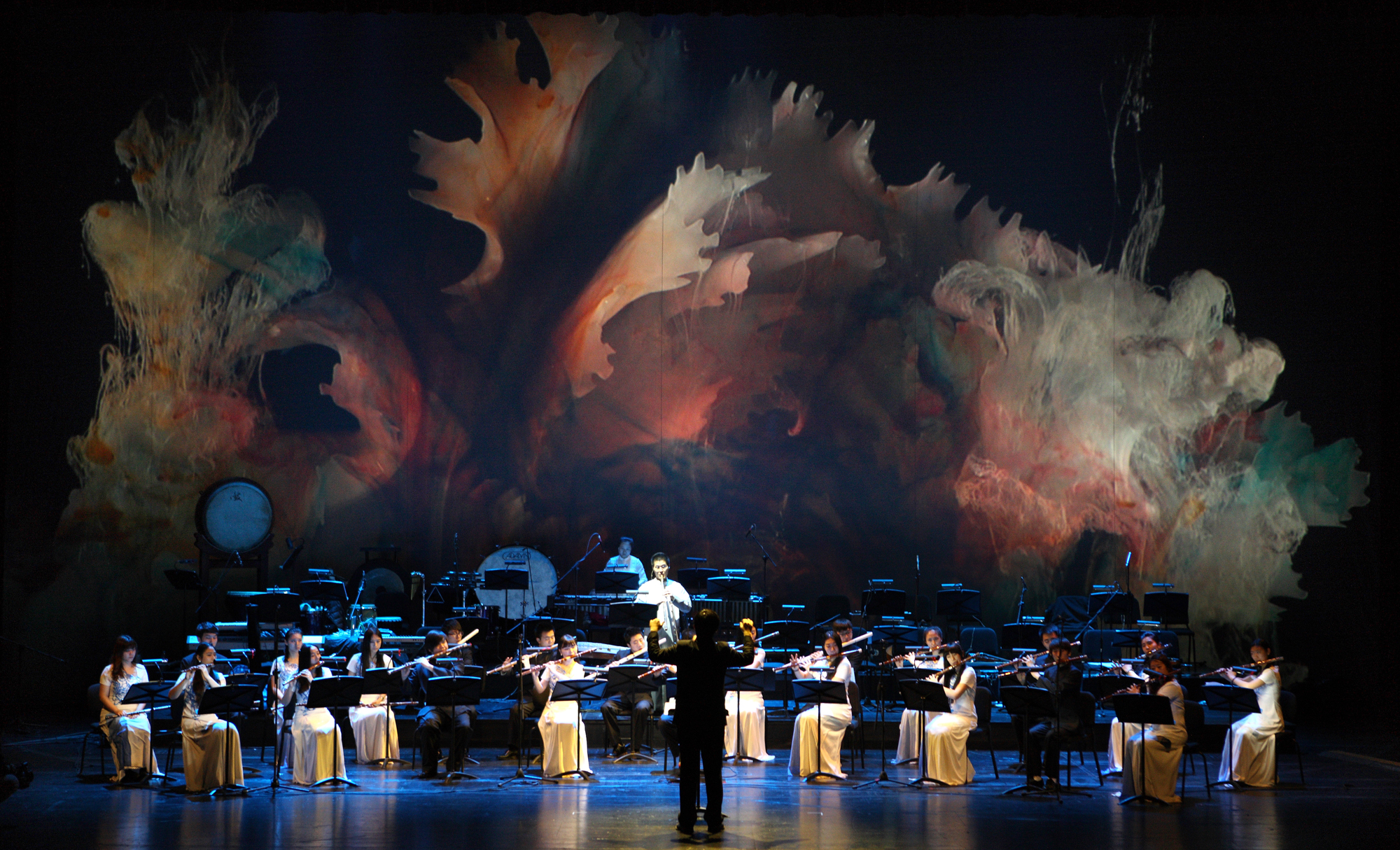 From the Chinese Bamboo Flute Orchestra (中国竹笛乐团) performance Call of the Ancient Past (远古的呼唤). (Photo provided by Zhang Weiliang)

Sitting with Zhang Weiliang in his office a week ago, he was brimming with ideas for the future of the group. At this time, he shared with me several scores being premiered on the ensemble’s upcoming concert at NCPA this December. Scored for dizi in combination with other Chinese and Western instruments (pipa, guzheng, erhu, and vibraphone), these pieces represent a new direction for the orchestra. Due to the overwhelming multiplicity of genres which may be called “Chinese music,” there can be little or no crossover historically between certain instruments (e.g., xiao and suona). By experimenting with instrumental combinations that blend dizi with other Chinese and Western instruments over the next few years, there will be many greater timbral and harmonic possibilities than an ensemble of dizi alone is able to provide.

Ultimately, Zhang Weiliang’s goal is to forge more international collaboration and understanding through dizi, creating art which is at once Chinese music and able to be universally enjoyed.

► ▼One thought on “An Introduction to the Chinese Bamboo Flute Orchestra”