When baritone saxophonist and composer Fred Ho organized sixteen musicians to tour New York City and Vermont in 2014, NPR reported that the “16-piece band wants to introduce a new audience to the voice of Fred Ho.” The tour, dubbed the “Red, Black, and Green Revolutionary Eco-Music Tour!,” however, did not focus on his own compositions, but on the work of the Black Panther-affiliated trumpet player and composer Cal Massey. Massey, active in the 1950s and ‘60s, was an overlooked iconoclast with close links to the core of the post-bop New York scene. Musicians of the post-bop scene included McCoy Tyner and John Coltrane, both of whom collaborated with Massey. Coltrane recorded one of Massey’s songs, “The Damned Don’t Cry,” during his 1961 Africa Brass sessions, and (according to Fred Ho) McCoy Tyner’s first professional date was with Cal Massey. Ho’s ensemble performed Massey’s 1969 opus, The Black Liberation Movement Suite, which was interspersed with spoken word performances, rousing discourses from veterans of the Black Panther Party, and visual art that celebrated long-held prisoner and Black Liberation Army member Russell Maroon Shoatz. On this, Ho’s final tour before his passing—Ho transitioned after a grueling cancer battle just two months later—he gave his platform and his voice, once again, to the Black Liberation Movement.

On Fred Ho’s final tour before his passing, he gave his platform and his voice, once again, to the Black Liberation Movement.

On the fourth day of the tour, in the middle of a concert at the University of Vermont before more than 300 students, the tour organizers received a joyous phone call: a major objective had been achieved. Former Panther Russell Maroon Shoatz, held in solitary confinement for twenty-three years, had been released from his cell (7 feet wide and 12 feet long) into the general prison population. It was widely speculated that Shoatz received this cruel treatment and exceedingly long sentence because of his provocative and inspirational political beliefs, which included full-thronged advocacy for matriarchy and urban homesteading, ideals expounded upon in texts he shared with other prisoners and outside writers while serving his life sentence.[1] Ho decided to publish these writings, which ranged from a historical analysis of maroons in Haiti to appeals for women’s leadership in social movements within an ideological framework that Shoatz termed revolutionary matriarchy. The resulting volume, Maroon the Implacable, was discussed during our performances, and its ideas (and its author) generated intense interest amongst the university and community audiences for whom the band performed. Many not only purchased the book but also participated in a letter-writing campaign challenging the Pennsylvania Department of Corrections which had administered Shoatz’s solitary confinement. Ho and the musicians employed the power of cultural activism to engage youth and elders alike in a political process, teaching them both about the history of the Black Power movement, its ongoing relevance, and motivating audiences to challenge Pennsylvania’s attempt to silence and virtually erase this revolutionary. 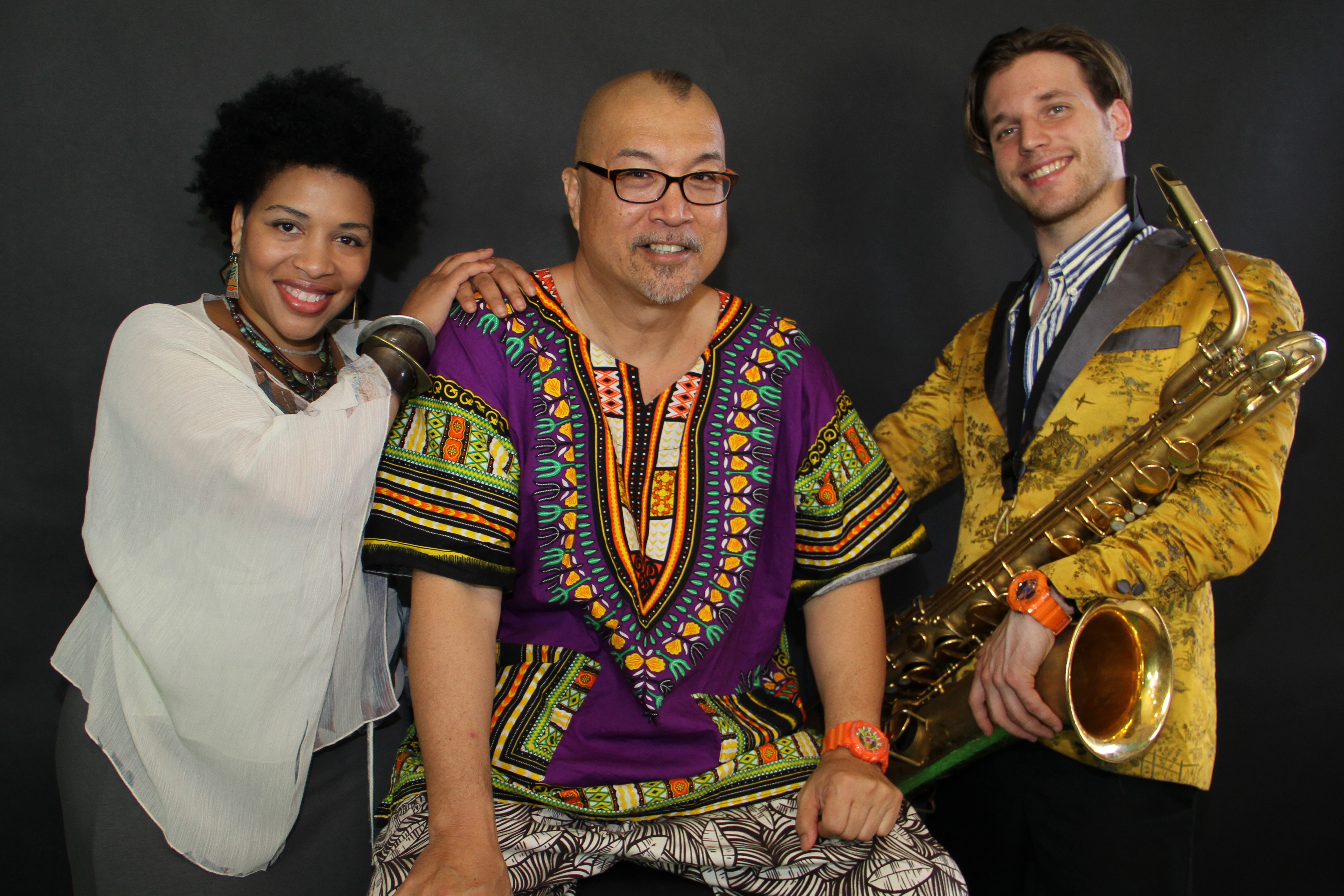 These inspirational experiences showed us the “call and response” that exist between revolutionary art and meaningful political outcomes.

These inspirational experiences showed us the “call and response” that exist between revolutionary art and meaningful political outcomes. Salim Washington referred to this phenomenon as the “macro-antiphonal” aspect of jazz: the call and response between the freedom dreams of Black Americans and this “fundamental, pervasive and catalytic” that underlay the aesthetics of jazz.[2] Fred Ho, channeling Washington, wrote on the subject in an article “Why Music Must Be Revolutionary — and How It Can Be”:

Antiphony is the musical term for “call and response.” …“[J]azz,” everything about it, if is practiced with vital authenticity, is macro-antiphonal, that it calls and the artist, the audience and the music, everything in the universe, must respond.  That is The Magic of Juju.  Shaman-istic, transcendent, evocative, provocative, catalytic, procreative, creative, experimental, perpetually avant-garde, restless and bold, adventurous, exploratory, creatively irrepressible, futuristic, imaginative, and innovative.  Every performance prefigures, anticipates, and is a musical vision-quest for what is next, and discontent with the past and present meanderings and status quo, demanding.

The lessons of the macro-antiphonal were intensely apparent in the Red, Black, and Green Revolutionary Eco-Music Tour, to which we both contributed. This force was extremely formative to us as artist-organizers. In fact, in many ways Cal Massey’s Black Liberation Movement Suite (and how Ho was able to mobilize this work in service of the actual Black Liberation Movement activists) became the impetus for our jazz opera, Mirror Butterfly: Migrant Liberation Movement Suite. Mirror Butterfly, as noted in earlier articles, built its libretto and sonic imaginary from the lifework of women eco-activists in the global south. As in the work of Cal Massey and Fred Ho, our own work foregrounds social movement leaders as wells of compositional and aural inspiration. In addition to the subject matter, the piece built a solidarity economy through its distribution model. These decisions led to meaningful political outcomes, such as connections between indigenous social movements in Mexico and Kurdish organizers in Mesopotamia, as well as the ongoing construction of a Yaqui radio station to resist the fracking and destruction of the uniquely biodiverse Yaqui river. The music aimed to capture the same sense of an ever demanding and ever-pushing forward-ness—exemplified in constantly shifting time-irregular signatures that retain a sense of groove, overlapping harmonic systems that still support melodic sensibilities, and an intensely intercultural orchestra that fused pipa, batá, jazz big band, and operatic/gospel choral music. 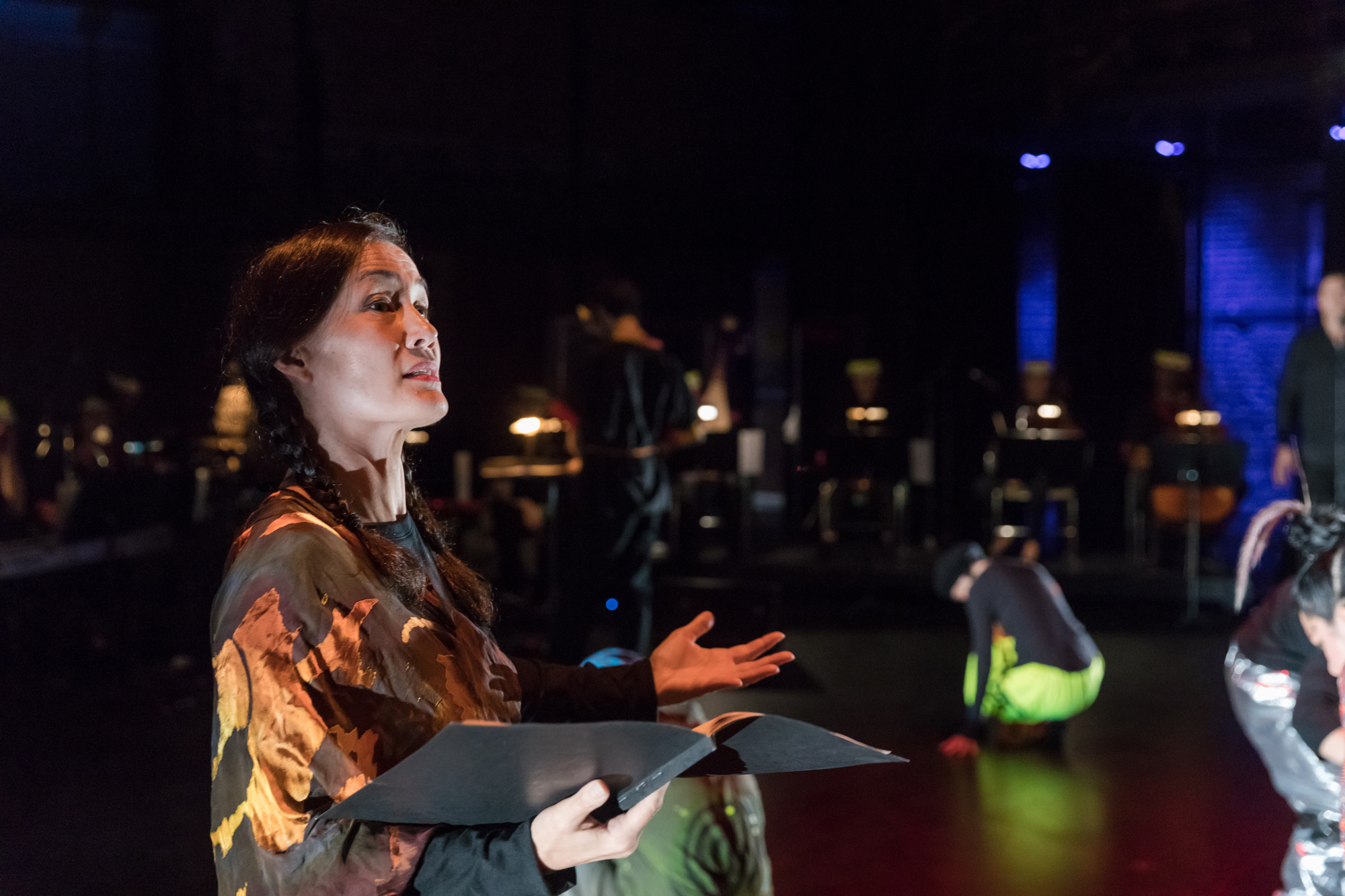 Our hope as composers and conceptualists is to summon the social memory of the oppressed.

All of these spoke to elements of the macro-antiphonal in both the structure of the music and the political outcomes of the work. Our hope as composers and conceptualists is to summon the social memory of the oppressed, which bore witness to the horrors of capitalism, with its building blocks of genocide, slavery, and ecocide. These memories generate multiplicities of meanings when their call for justice summons the activists of ongoing liberation movements. Such figures animate and re-animate the call for a revolution of values, a revolution of the self and community, and ultimately, a revolution against global capitalism. As with Russell Maroon Shoatz’s victory during a tour of Cal Massey’s music, we hope that this piece will animate concrete political outcomes that help us move beyond the necrocene—the age of mass extinction—into a human society with a seven generations consciousness that is looking beyond itself and considers all life as interconnected. Again, we were reminded of the Red, Black, and Green Revolutionary Eco-Music Tour, when Master of Ceremonies Colia Clark, a committed pan-Africanist and organizer who cut her teeth with the Student Nonviolent Coordinating Committee, sang in her prophetic voice:

Benjamin Barson is a composer, educator, baritone saxophonist, historian, and political activist. He is the recipient of the ASCAP Foundation’s 2018 Johnny Mandel Prize, ASCAP’s highest honor for jazz composers under 30. Barson is a Teaching Fellow and Ph.D. candidate at the University of Pittsburgh, where he studied under Geri Allen and currently teaches the History of Jazz and Recording Technology classes. His research and compositional practice explore the jazz idiom’s dialogue between Afrodiapsoric, American Indigenous, and East Asian influences. Ben was also the recipient of ASCAP’s 2017 Fred Ho... Read more » 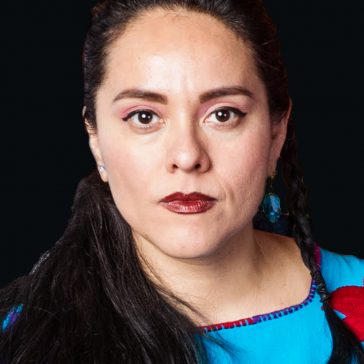 Gizelxanath is a singer, cellist, urban farmer and activist at the intersection of Indigenous rights, ecosocialism and migrant justice. Rordiguez is an award-winning soprano; she won the Latin ACE award in 2014 in New York City. More recently, Gizelxanath’s focus has been as a political activist in international social movements related to Indigenous rights and ecological justice / ecosocialism. She was a delegate to the First Ecosocialist International, a historic gathering of over 100 activists from 5 continents in the Maroon afro-descendent community of Veroes, Venezuela. She has worked with... Read more »