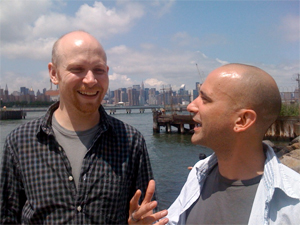 Cenk Ergün and Jason Treuting share a history of musical familiarity, one that goes back more than a decade to their student days at the Eastman School of Music. But when Treuting begins to describe the Turkish-born composer’s output, he hesitates for a second, not quite sure which words to choose even though he’s served as a percussionist in performances of Ergün’s music.

Listen to Molly Sheridan interview them on Counterstream Radio (originally broadcast on June 18, 2009)

“If somebody’s going to say ‘I’ve heard a Cenk piece,’ probably what you’re going to think of is—sparse?” Treuting ventures, glancing Ergün’s way as if to confirm he’s selected correctly and not inadvertently caused offense.

“I would be happy if somebody said that,” Ergün agrees, and the room exhales. As the two men continue their banter, it quickly becomes clear that there is little chance of serious misunderstanding between them. After years of working together, part of the appeal seems to lie both in the confidence they have in the other’s skills and the trust they can place in the other’s judgment.

Having successfully distilled Ergün’s style, Treuting takes a shot at zeroing in on the impetus behind his often spare aesthetic. “You put down on the paper what you need,” he suggests, “and then know that there’s nothing there that you don’t mean.”

It’s a clean idea in theory, but in practice it can get a little messier. Ergün’s approach—taken to the extreme in works such as An, a 17-minute piece for flute, viola, and harp that focuses on only a single pitch for all three instrumentalists and employs plenty of rests—can also leave a performer standing center stage feeling overexposed while waiting to play the next note, a situation whose emotional dynamics are not lost on Ergün. “It becomes theatrical a little bit. It puts a responsibility on you to believe in the music that you’re not playing,” he acknowledges.

What once might have been admittedly spurred by a desire to confront the expectations of the audience and a reaction to the complex works being produced by fellow students has now evolved into a distinct personal style, and silence remains a high-value commodity on Ergün’s sonic pallet. “It’s usually better not broken,” he says, only half kidding around, “and when you break it, you better have something nice to say.”

On a recent outing, Ergün did get a little more generous with the notes. It was a piece called Proximity that So Percussion, a quartet of which Treuting is a member, premiered at the 2009 MATA Festival. Though Ergün had been working on the piece for years on and off—”It was a long enough time that we had found some tractor blade that was in F and by the time you came back we didn’t have that tractor blade any more,” Treuting teases—but on the eve of the premiere, after months of careful crafting and revision, Ergün almost made a drastic alteration to the piece.

“Should I say this in public?” Ergün asks, plowing on without waiting for a response from Treuting. “I freaked out the day before. The piece has no skins, no drums; it’s all metal.” Still, as he traveled to New York for the performance, he found himself calling Jason and So percussionist Adam Sliwinski in a panic. “The opening, it’s bad,” he recalls telling them. It was the section that had taken him the longest to write, but later he worried it was too intense and stressful a way to open the work. So he proposed a radical alternative. Over the phone, he told them, “We’re going to use drums, loud drums—and the piece is not loud at all—we’re going to use loud drums, eight drums. Adam was like, ‘You had me at eight drums.’ ”

The So percussionists said that they would do whatever he liked—it was his piece.

Ergün appreciated their flexibility, but recognized that their reaction was not exactly a vote of confidence and reversed course, “but I almost screwed up the piece, honest to God.”

Last minute panic attacks aside, Ergün acknowledges how vital it was to work directly with the musicians over the course of work’s development. “I think for me at least, this is the only way to write chamber music, where I don’t sit in my room by myself and write a piece of music and then say, ‘Here, you play it.'”

Treuting finds that, depending on the composer, there still comes a certain point when it becomes “a negotiation on how collaborative it can be,” but it makes for an incredible experience to be so intimately involved, particularly with a friend like Ergün. And it’s also perhaps been influential—these days Treuting has been taking steps deeper and deeper into the composing pool himself.

Ergün—who also does some performing, mainly on laptop—applauds the double title Treuting is taking on. “It will make you a very sensible performer and a very sensible composer, to be able to do both,” he points out, though personally “if I had to let one go, I’d let my performer side go.”

“Yeah, yeah, right,” Treuting agrees before revealing how deeply enchanted he’s become with composing himself. “Me, too!”