If you were a kid growing up in Minnesota in the 1960s and you were a kid with an intense hunger to create your own music, you found yourself growing up in a kind of Coney Island of creativity There was Big Reggie’s Danceland, a big old barn of a place where every weekend you, and as many of your friends as you could pack into your car, would dance to music of the hottest young rock groups like the Beach Boys, the Everly Brothers, Roy Orbison, Jerry Lee Lewis and the Rolling Stones. Minneapolis was ground zero for the big bands of the Upper Midwest like The Trashmen and the Underbeats.  Some of your friends were even in those bands and they were producing big hits like “Surfin’ Bird” and “Foot Stompin’”.  It seemed that everyone was creating their own original music.

Every church in the Twin Cities of Minneapolis and St. Paul had at least one choir and everyone sang in at least one of them. If you had season tickets to the performing arts series at the newly opened Guthrie Theater, no matter where you sat you were no further than 52 feet from the stage you were awash in the energy and musical air of Janis Joplin, James Taylor, Mose Allison, and Miles Davis.

When you went to plays at the Guthrie Theater, the music for each play was newly composed and performed live.  If you had student season tickets to the Minnesota Orchestra, yes of course you would hear standard repertoire, but your head exploded with new works by Penderecki, Legeti, Skrowaczewski, and Lutosławski.

If you loved opera, you wrangled some tickets for the Center Opera (which you knew always produced new work) where you heard Virgil Thomson’s The Mother of Us All, Carl Orff’s The Story of the King and the Wise Woman (Die Kluge), Eric Stokes’s Horspfal—season after season of newly conceived work.

Dominick Argento’s name was never on the programs at Big Reggie’s Danceland, but at the time it seemed that in the season of every other major performing arts organization, there he was!

Dominick Argento’s name was never on the programs at Big Reggie’s Danceland, but at the time it seemed that in the season of every other major performing arts organization, there he was!  He was a founder of the Center Opera company, opening their first season with his Masque of Angels and creating numerous chamber operas for them, including Postcard from Morocco, The Voyage of Edgar Allan Poe, A Waterbird Talkand many more.

Being 17 years old then, and certain that I would go to the University of Minnesota, study voice, and become the next, biggest star of the Metropolitan Opera, it didn’t occur to me that Dominick Argento was also on the music faculty there.

At age 19, discovering that I loved to compose and, if I would take myself seriously, I could study composition with the master composers at the University of Minnesota, Dominick became my teacher and I became his student.

Dr. Argento (everyone called him this and nothing else) was a legendary professor.

Dr. Argento (everyone called him this and nothing else) was a legendary professor. He passed us in the halls, smiling (shyly?) but rarely stopping to engage any of us in conversation. We admired his focus, and his devotion to his work.  We students jockeyed for coveted positions in his classes, especially his History of Opera class. His lectures were brilliant, funny and fueled by his passion for and love of opera. Class after class he regaled us with stories about each opera, always colored from his composer’s perspective. He loved the human voice and would praise various singers who inspired operatic roles in the works we studied. He loved composers who loved the human voice. Be it Verdi, his hero, or Gounod, not his hero, we were transported into each composer’s world and immersed in the circumstances that influenced the creation of each opera.  I learned the operas, of course, but perhaps more importantly I learned that a passion for something can light a powerful fire. Dominick’s passion for opera and the human voice resulted in 14 operas, numerous mono-dramas and song cycles, his Pulitzer Prize, and the Center Opera Company, now the Minnesota Opera.

Such a ferociously quick wit Dominick had!  No gathering of Dominick’s students goes by without one of us re-telling the story from his orchestration class on percussion. On one particular day we were immersed in the lecture on metallophones. He held up a vibraslap, looked at it for a moment, looked at us and said “elephant contraceptive.”  We were too in awe of him to laugh, but we’ve been laughing ever since, and we all know and orchestrate the vibraslap in original ways.  Or the lesson on harp, one of his most beloved instruments. In just one class we learned that the pedals were D-C-B-E-F-G-A, Dominick for “D”, Argento for” A” , plus “your pinky finger is for tea drinking, not harp” and “you never hear the attack of a note, only the decay—what you hear is the air.”

Dominick believed that it wasn’t possible to teach composition.  Rather he worked to guide a (student) composer’s natural gift to its best iteration.  You couldn’t look to him to tell you what to do or how to compose. You were expected to establish your own practice techniques and work habits and arrive at your lesson with your piece in shape.  Individual lessons with him were an adventure in silence.  I would bring him my score, which he would lay out on his desk and read to himself before making any comments.   He expected me to come ready to spar with his huge intellect, his razor-sharp wit, and his undeniable professional experience. And spar we did—only the conversation between us took place in my head as I perched on the wicker chair with the blown-out seat that he set by the side of his university-issued grey metal desk, and I watched the ash of the newly lit cigarette in his hand burn longer and longer and longer. I thought, “Will that damn ash fall into that glass ashtray?  No, no, concentrate on the composition he’s reading!”—which he read to himself, not out loud, not commenting. But then he would zero in on the one, most important issue in the work that day—which I knew already because I sat there questioning everything about my work as I tried to imagine what he would say. It took me a while to understand that his teaching style instilled in each of his students three essential gifts: creative courage, critical evaluation, and self-confidence.

The lesson ended always with good humor, his cigarette snuffed out, and a deep sense that we, teacher and student, had met at the cross-roads of respect for the art form we both hoped to serve.

I think the most important lesson Dominick gave to me, and to all of us who were fortunate to have worked with him, is that there is a profession – composing music – and while it poses deep challenges the work itself is not work, it is pleasure.  The pleasure lies in the community of musicians, performers, writers, concert producers, and audience who come together in a huge joy-fest around the composers’ work.  He modeled this for us every day and continued to model it throughout the years. Many late nights, as I work through a difficult part of my composition, not feeling pleasure in the moment, I invoke his lesson—the work itself is not work, it is pleasure.

As I joined the profession and became a musical citizen contributing to the community by panel work or sitting on a Board of Directors, more often than not during a discussion which begged the advice of people who were not in the room at the time, Dominick’s name would be invoked along with a bit of his advice and wisdom.  Always sage and ethical, his advice was remembered, quoted and always welcomed. 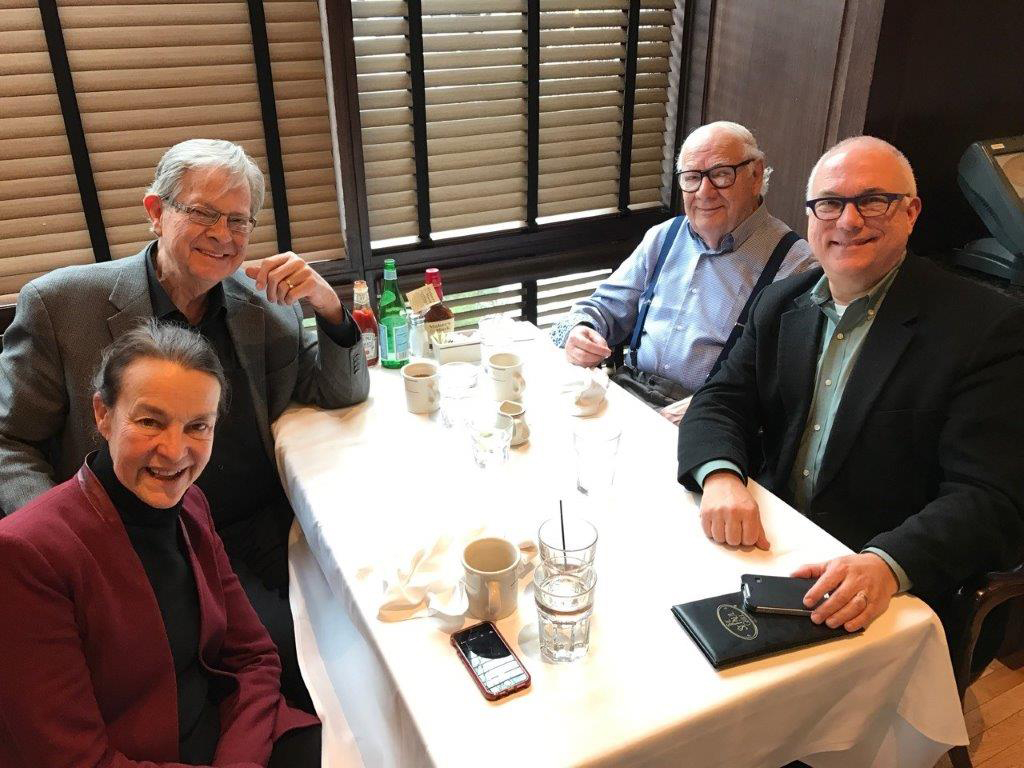 Over the past forty (really…forty?) years I would often run into him during intermission at concerts.   These were happy, brief encounters, where our talks were always shaded with his insight and wit.  We asked after each other’s health. He always asked what I was “working on” and I always asked him the same, because we both knew that we were always “working on” a new piece – that was our mutual bond.  We would exchange thoughts on the latest compositional trends.  We would pat each other on the arm and head back into the concert hall.  During the last few years, when Dominick’s hearing began to fail, our intermission and lobby encounters were still happy and brief though his verbal witticisms were shorter with their meanings understood through our years of association.

The work itself is not work, it is pleasure.

Now, as I finish a letter of support for the University of Minnesota Archives to document his work on digital technology, I recognize again and permanently Dominick Argento’s mastery of his talent, his times and his culture and his determination to put his music into his world.  In doing this he taught  each of us who had the good fortune to work with him how a professional classical composer in this country lives and works, how work is pleasure, how pleasure is in community, how community contributes to life, how life is joy, how joy is music.   Thank you, Dominick.

Libby Larsen (b. 24 December 1950, Wilmington, Delaware) is one of America’s most performed living composers. She has created a catalogue of over 500 works spanning virtually every genre from intimate vocal and chamber music to massive orchestral works and over twelve operas. Grammy Award winning and widely recorded, including over fifty CDs of her work, she is constantly sought after for commissions and premieres by major artists, ensembles, and orchestras around the world, and has established a permanent place for her works in the concert repertory. As a vigorous,... Read more »

► ▼One thought on “Brilliant, Funny, and Fueled by Passion—Remembering Dominick Argento (1927-2019)”