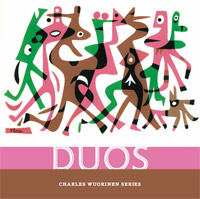 An instrumental combination which shouldn’t work and rarely does is guitar and piano. But that hasn’t stopped composers over the centuries from creating a surprising amount of repertoire for this pairing, which usually either has a really bland piano part (so as not to overshadow the guitar) or a more interesting piano part (which winds up drowning out the guitar). So it’s something of a minor miracle that Charles Wuorinen’s 1995 Sonata for Guitar and Piano is so compelling and effective in its ability to strike an appropriate balance. Wuorinen achieves this by making the instruments equal partners, keeping the piano flighty and frequently monophonic while emphasizing guitar strums of rich, dense harmonies.

This substantial three-movement work is a perfect way to open the latest addition to the Charles Wuorinen series on Albany Records, a disc devoted entirely to duos by Wuorinen. Most of the works herein had previously been unavailable on commercial recordings, and some are scored for combinations as unlikely as the aforementioned Sonata for Guitar and Piano. Wuorinen’s 2006 setting of James Tate’s poem “Never Again the Same” features a bass vocalist accompanied only by tuba. The result is a quirky four-minute composition that remains exclusively in the lowest register. The aphoristic Eleven Short Pieces, also from 2006, pits the long bow strokes of a violin against the sharp mallet attacks of a vibraphone. But before you can really wrap your brain around what’s going on, it’s already over—the eleven pieces last barely over two minutes in total.

But not everything herein is an exercise in timbral anomalies. The intimate setting of Psalm 39 pairs solo baritone and guitar. The 2004 Duo Sonata offers a Wuorinen essay for flute and piano, a combination which inspired generations of French composers. However, as might be expected, Wuorinen’s approach to this configuration is light years removed from Ibert or Poulenc. Still, Wuorinen manages to eke out an undeniable lyrical strain within a very tight compositional framework, one which the players—Robert Aitken and pianist James Avery (for whom it was written)—bring out with élan. Wuorinen actually composed a great deal of chamber music involving flute and piano in the earlier decades of his compositional career, including a sonata and three trios for flute, cello, and piano, all as of yet still unavailable on CD. One can only hope that Aitken and Avery will eventually probe the rest of this oeuvre in subsequent releases. Alto saxophonist Eliot Gattegno and pianist Eric Wubbels make a similarly resoundingly strong case for Wuorinen’s 1982 Divertimento.

Finally, it’s great to have available again the old CRI LP recording of Wuorinen’s 1979 Percussion Duo some thirty years after the work’s original composition. This single-movement dialogue between piano and mallet instruments (one player alternating on marimba and vibraphone) is one of the classics of a now substantial body of repertoire for piano and percussion, which has been one of the most exciting developments in chamber music composition over the past three decades.