Conversations
Articles
Headlines
Archive
[Ed note: One of the highlights of this year’s 20th anniversary MATA Festival will be a repeat MATA performance of P(l)aces by Randy Hostetler (1963-1996) during the April 13, 2018 concert called MATA’s Greatest Hits. The posthumous world premiere performance of that composition, the score for which MATA co-founder Lisa Bielawa reconstructed from manuscripts, computer files, and videotapes rehearsals of the work in progress that she found among effects of his that his parents kept, took place during the very first MATA Festival in a concert on January 13, 1998 at Anthology Film Archives in New York City. Its extremely strange mix of metrical complexity, appropriated riffs from reggae, salsa, and many other styles of music, taped sounds of barking dogs, power tools, and lamps made it one of the legendary events in American music history as did its illustrious cast of perfomers: Bielawa and MATA’s other co-founder, Eleonor Sandresky, the Talujon Percussion Quartet, trumpeter Susan Radcliff, trombonist Monique Buzzarte, trombone, guitarist Oren Fader, Jack Vees on electric bass and washtub bass, percussionist Frank Cassara (who served as a timekeeper), and conductor Beatrice Jona Affron, music director for the Pennsylvania Ballet. Since in addition to performing in that premiere, Jack Vees had an unusual relationship with Randy Hostetler, we asked him to share his memories about him and that premiere.—FJO]
launch gallery

It has been twenty years since the performance of Randy Hostetler’s P(l)aces on the first MATA festival. Randy was a composer whose works lit up our world—for many of us starting in the early 1980s—and that glow continues on through today.  His life was cut short (probably by Addison’s Disease) in 1996. His death left a huge tear in our community—not just because of the brilliance of his own works, but also because Randy’s generous spirit brought people of all sorts together.  Shortly after he moved to California, he established the series Living Room Music, which gave opportunities to many composers and performers and provided a much-needed outlet for alternative new music in the Los Angeles area.  It was through a network of friends and colleagues that I began to know of this extraordinary person.

One of the factors that makes writing this remembrance especially difficult is that Randy’s is one of my first and deepest friendships with someone that I never met in person.  OK, this will take a little explaining, but I think it will point out what a remarkable presence Randy is (not was) in this proto digital era.

Randy and I maintained an almost perfect symmetry of being on opposite coasts at exactly the same time.

Randy and I somehow maintained an almost perfect symmetry of being on opposite coasts at exactly the same time.  While I was at CalArts (official student-hood starting in the early ‘80s) Randy was an undergrad at Yale. When I came East in the summer of ‘86, landing at Yale as a spouse-in-tow of a grad student (Libby Van Cleve), Randy was heading toward CalArts. I like to think we passed each other somewhere in Kansas.

Shortly after arriving at Yale, I began to hear stories from Martin Bresnick about this really cool, young composer I should have met, but who had just graduated and left to continue his studies at CalArts.  These included some of the escapades of Sheep’s Clothing, a student performance art group, under Martin’s direction.  That group has left a legacy of antics from its members, which included Randy, Jeff Brooks, Scott Lindroth, and David Lang.

And the Randy-related stories didn’t stop there.  Pretty soon I was hearing more about this “kid” from Art Jarvinen, one of my closest longtime friends and accomplices. Art and I had been involved in a number of Dadaist and Fluxus performances, so we were used to seeing and hearing things that most others don’t just happen across in their travels.  This is just to say that for Art to remark about something or someone, it really had to be truly remarkable on a grand scale, and apparently Randy was.

I would go back to Southern California pretty frequently in the late ‘80s and early ‘90s, usually to take part in performances or the Monumentally Bad Poetry Soirees at Art’s house.  Although Randy would certainly be part of this crowd, it seemed every time I came west, he’d be on a trip somewhere else.  I was constantly missing Randy. Bummer.

Mel Powell, who had seen a lot in his lifetime (and had learned to let our silliness just wash over and not perturb him), knew that the “catchiness” of the surface of Randy’s pieces was a reflection and link to deeper truths, not just icing to hide the lack of them. If I would bump into him during my visits back to CalArts, Mel would often bring me up to date about the latest batch of crazy kids.  Even in this milieu, Randy stood out.  Mel commented about “that Eight-Ball piece” (actually titled 8) as being particularly memorable.  There was something about it that Mel knew was much more than witty novelty.  If you take the time to watch Randy’s performance of it, the experience is enthralling, and Mel knew it was brilliant.

Somehow as the late 1980s became the ‘90s, my trips to L.A. became less frequent, but the common use era of email began to open up other possibilities. Art Jarvinen was instrumental in connecting Randy and me.  We traded a few emails, and I believe that somewhere in a landfill in Connecticut there’s a NeXT cube with the extent of our correspondence on it.   In 1996, things seemed about to change.  I would be headed out west again, and this time Art was planning on setting up one of his incredible dinners for us to finally meet in person.

Then in February I got “the phone call” from Art.  Randy had passed away after what seemed to be a very brief illness.  Art was devastated.  Though being of stoic Finnish stock, Art could be tremendously impacted by friends’ deaths. In response to Randy’s passing, he wrote the beautiful Endless Bummer, a gentle and poignant turn on the surf music of “Endless Summer”. 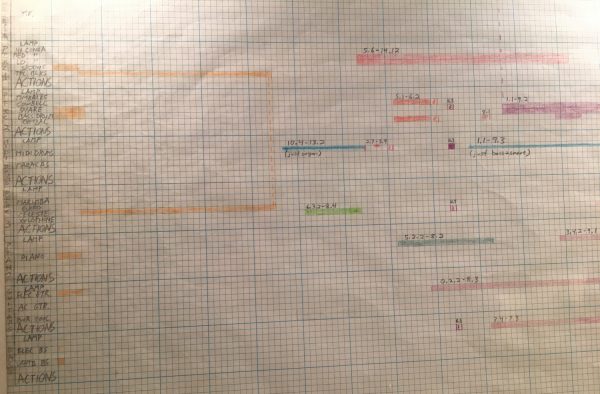 A graph paper page from the original manuscript score of Randy Hostetler’s P(l)aces.

What I remember about the first MATA festival and the process of bringing Randy’s P(l)aces together is this: Lisa Bielawa and Eleonor Sandresky had both gone to Yale around the time Randy was there. As they began the huge task of programming the festival, it was clear that P(l)aces would be an important element both aesthetically and emotionally.  To be honest, I don’t remember if they first asked me to play bass on it, or if I insisted that I had to.

If we try to put it into a particular box in terms of style, P(l)aces is uncatagorizable.

P(l)aces shines a light on at least two important aspects of Randy’s work. First, if we try to put it into a particular box in terms of style, it is uncatagorizable.  However, it does have certain attributes of both modernist and post-modernist styles (and probably Classical and Romantic too, but that’s calling for a wider paint brush than I brought today).  I think it has something to do with Randy’s sense of how to take primal elements and to find how they relate in complex ways instead of taking the easier route of just being complicated. This has a benefit for the players.   As part of the ensemble, it always felt like individual parts were rooted in a familiar tradition, but all the parts together were unlike anything I’d ever heard.

Similarly, in Randy’s electronic works he manages to sculpt the familiar into the unique with the use of only the bare minimum of studio frippery.   A prime example is Happily Ever After. It has no robust algorithms, no elegant Max patches, maybe even no reverb.   What it does have is a collection of very human-sized stories told by many of his friends and recorded by Randy.  They all start the same way (“Once upon a time”) and all end the same way (“happily ever after”).  What happens to the individual threads in between is up to each storyteller, but the resultant whole is an exquisite tapestry woven by Randy that gives dignity to each of those threads.

Randy’s generosity towards other composers and performers carries through to all of us who listen to his work.  He never directs our attention to his own skill as a composer, but subtly shifts our attention to have us reconsider our own selves—and each other—in a more favorable and generous light. 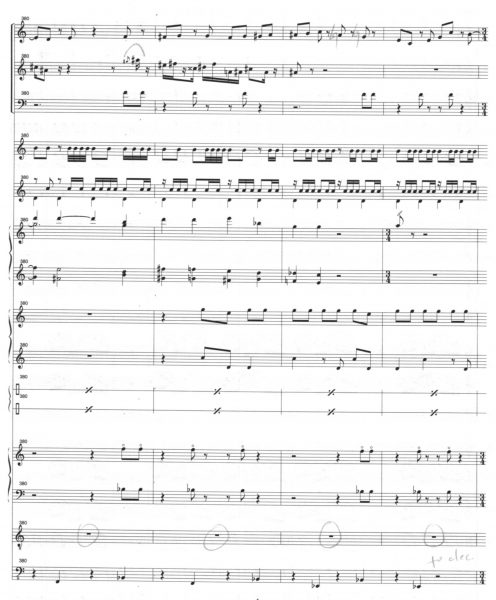 My career includes significant work in music composition and inter-media collaborations, as well as celebrated performances as an electric bass player, and since 1986, the position of Director and (from 1986-2004) co-director, of the Center for Studies in Music Technology at the Yale School of Music.       In addition to working on the framework for Twin Reverb, my proposed project, I have composed many recent works for acoustic instruments with electronics, and also strictly acoustic cooncert works.  My most recent Piece, War Tubas, combines the solo tubist with... Read more » 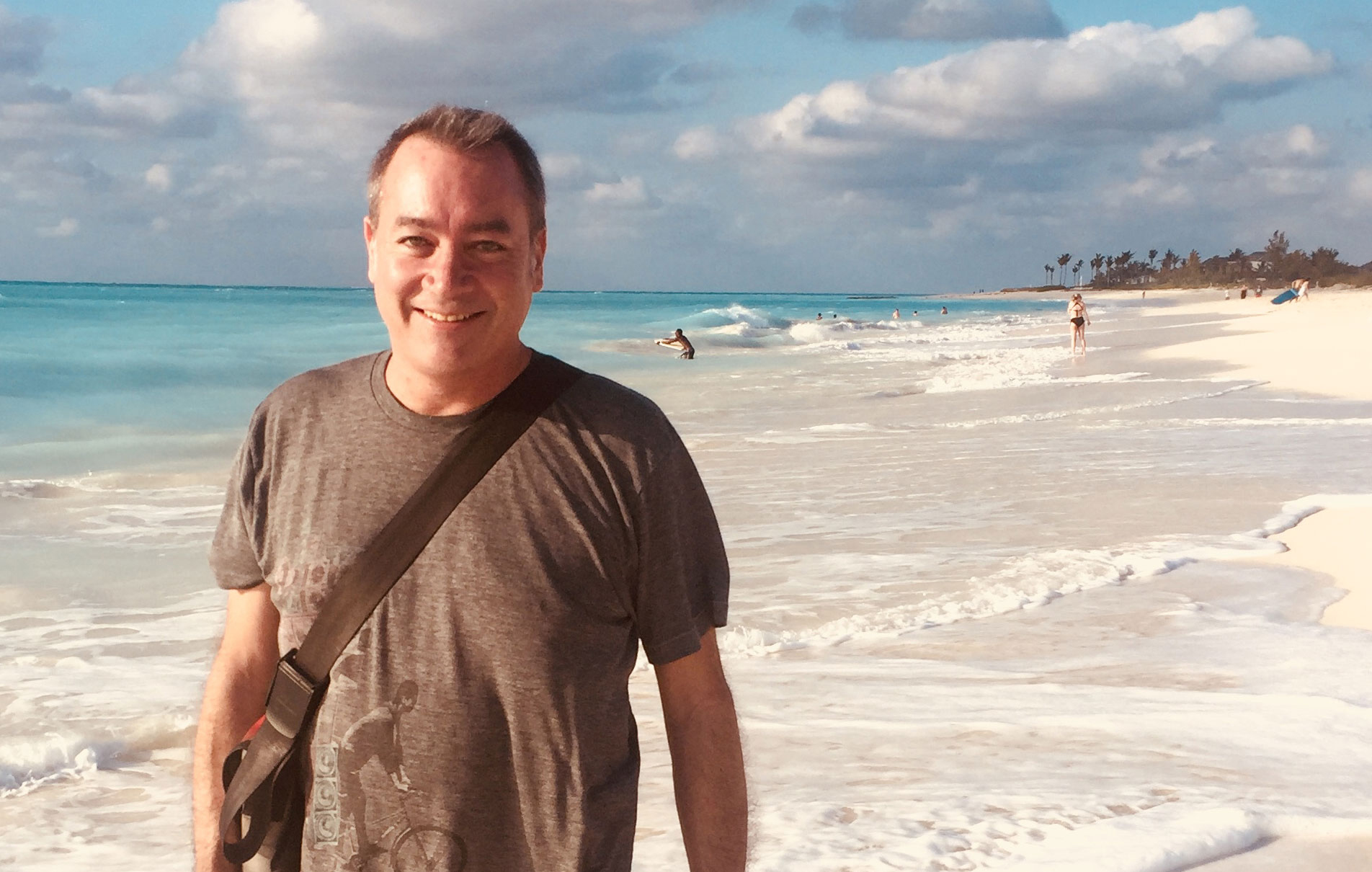