This is a two-part article about rehearsing a traditional large ensemble: orchestra, band, or choral ensemble. Many of the ideas put forward won’t be necessarily new, which is a good thing. It means that many conductors are experimenting with, even perfecting, a more inclusive, student-driven approach to large ensembles. But having traveled around this country and a few others visiting music programs, I’m still struck by the overwhelming adherence to the top-down, dictatorial method of running a rehearsal.

I’m convinced that the majority of conductors believe that simply because a student is in his/her ensemble playing an instrument, or singing, they are “engaged.” More and more, I’m convinced that this just isn’t the case. We stand on a box, with a stick, telling them what to do, when to do it, and how to do it. And yet, I keep hearing from the music advocacy folks that what we do in the music classroom is somehow “different” or “better” than what happens in other classrooms. Well, of course it is—as far as I know, there aren’t any snare drums and saxophones in a chemistry classroom—but we really don’t teach any differently. And lest anyone think that I’ve got this completely figured out, let me assure you, I don’t. In 2013 I published an article in the Music Educators Journal on this topic and I still don’t pretend to have it all figured out. More on that later.

There aren’t any snare drums and saxophones in a chemistry classroom.

Broadly defined, the student I am teaching today in many ways is the same kind of student I taught at the beginning of my career—smart, engaged, overachieving, hard-working, dependable, dedicated, curious, kind…all that good stuff. But, in other ways, the student I’m teaching today is different. It’s mostly because of an addiction to technology but also trends in parenting and schooling—and societal changes, too. So I think it’s important to assess how we teach every once in a while. Trends come and go, I realize (who knew that leg warmers and high-waisted jeans would make a comeback), and there is a LOT of validity in teaching students to sit, listen, and be quiet. But there is also validity in more student engagement, more student involvement in learning and process, and more student ownership and responsibility.

Imagine, if you will, a gentleman plucked up from his late-19th-century life with a time machine plunked down in Times Square New York City in 2018. Absolutely everything would blow his mind—the cars, the lights (NEON!), the noise, the dress, the store offerings, the height and density of the buildings…everything. He would be completely lost. Until, of course, he walked into a classroom. Except for those white boards and maybe a projector/screen, nothing much has changed in that department. Now imagine a trombone player from the Sousa band plucked up with that same time machine and plunked down in your rehearsal room. With the exception of wondering what all that extra percussion equipment was doing in the room, he would know exactly where he was and where to sit. Now, I’m not saying this is all bad. But, it’s something to think about.

A gentleman plucked up from the late-19th-century to 2018 would be completely lost…until he walked into a classroom.

A decade ago, Randall Everett Allsup and Cathy Benedict penned an important wake-up call for band teachers called, “The Problems of Band” (Philosophy of Music Education Review, 16, no. 2, Fall 2008). If you haven’t read it, give it a go. It’s a no-holds barred exposé of the “band tradition” that even names names. Ouch. Here’s one of my favorite quotations from that article:

The problems of the American wind band…stem from an inheritance that is overwhelmed by tradition…predominantly teacher-centered, teacher transmitted, and content/repertoire driven…we are deluding ourselves if we think our students are actually taking on the responsibility of independent musicianship or becoming more musical.

Let’s think a moment about WHY we rehearse, especially in a school setting. I would think that what immediately comes to mind is something like this: to prepare a performance; to improve and perfect. But let’s go deeper. Rehearsing is something we conductors spend a tremendous amount of time doing, not to mention forcing our students to do it, too. What do we really want our students to learn in rehearsal other than the repertoire? Here are some ideas:

In a subsequent article, I’ll talk about some basics of good rehearsal technique, keeping in mind everything we’re talking about here. And then, we’ll move beyond the basics to get a bit more innovative and even more student-centered.

Cynthia Johnston Turner is Director of Bands, Professor of Music, and Artistic Director of Rote Hund Muzik at the Hodgson School of Music, University of Georgia. Turner conducts the Hodgson Wind Ensemble, leads the MM and DMA programs in conducting, and oversees the entire band program including the 430-member Redcoat Marching Band. She is “VIP Educational Clinician” with Conn-Selmer. Before her appointment at the Hodgson School at the University of Georgia, Cynthia was Director of Wind Ensembles at Cornell University.  At the Eastman School of Music Cynthia was the recipient... Read more » 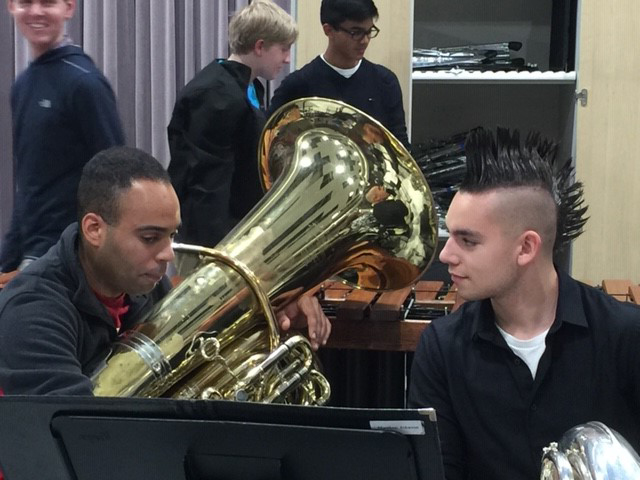