The Foundation for Contemporary Arts (FCA), a nonprofit arts organization founded by John Cage and Jasper Johns, has announced that composer Eve Beglarian is the recipient of their third annual Robert Rauschenberg Award which includes an unrestricted cash prize of $35,000. (The two previous awardees were choreographer Trisha Brown and the late composer Elodie Lauten.)

In this NewMusicBox interview from 2011 (you can read the entire transcript here), Beglarian gleefully proclaimed that she will exploit the resources of any compositional method if it takes her music where it needs to go and, as a result, she has created some of the most stylistically diverse music of our poly-stylistic era.

In addition, FCA has announced that dancer, choreographer, and filmmaker Yvonne Rainer is the inaugural recipient of a newly established Merce Cunningham Award which in its inaugural year has been awarded to Yvonne Rainer who will receive $35,000 as well. FCA will fund the inaugural 2015 award but beginning in 2017 an endowment gift from the Merce Cunningham Trust will support the award. This new award joins two other permanently endowed awards at FCA: the annual Rauschenberg Award and the biennial John Cage Award (which last year was awarded to composer Phill Niblock). The Cunningham Award will be a biennial, by-nomination grant given in recognition of outstanding achievement in the arts that reflects the creativity and spirit of Merce Cunningham. As part of the 2015 awards cycle, FCA has also announced 14 Grants to Artists in the disciplines of dance, music/sound, performance art/theatre, poetry, and visual arts, each of whom will also receive $35,000. The awardees in the music/sound category are composers Ellen Fullman, Zach Layton, and Missy Mazzoli; composer Cynthia Hopkins is among the performance art/theatre recipients along with Mallory Catlett and Jim Findlay. The other 2015 recipients are: poets Julie Patton and Tony Towle; visual artists David Diao, David Hartt, and Xaviera Simmons; choreographers Melanie Maar and Will Rawls, and the Minneapolis-based Body Cartography Project. 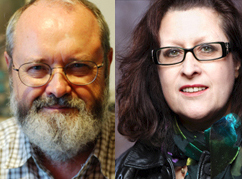