In March 2015, I arrived in Beijing for what started as a six-month stint and then sprawled into a year. I had come to study with Chinese composer Gao Weijie 高为杰 at the China Conservatory of Music 中国音乐学院, an institution whose primary focus is the study, protection, and promotion of Chinese folk music and traditional Chinese instruments. It was an immersive experience, and one which changed my life.

I have been living on and off in China since this time, while continuing to focus much of my compositional work around Chinese instruments. This series shares four different interpretations of and perspectives on exchange through my experiences and observations as a composer.

My interest in Chinese music developed after experiencing a concert of new works for traditional Chinese instruments while studying in Cincinnati in late 2013. I was taken aback not so much by the pieces on that particular program, but by the possibilities the instruments presented — a thought which was coupled with the sudden realization that my exposure to music up until that point had been limited to the canons of jazz, classical, and contemporary music.

I went on to spend several weeks in the summer of 2014 in Taiwan to study Chinese music on a research grant from the University of Cincinnati. In observing rehearsals, conversing with instrumentalists, and attending concerts (including a festival for Nanguan, also called Nanyin 南音), it became clear that this work would require sincere investment over a longer timespan if it were to result in musical understanding.

That I am still here is a testament to the supportive relationships that have formed along the way, as much as it is due to the magic of Chinese music.

My teacher at the time, Joel Hoffman, encouraged me greatly as I considered the possibility for further study in China. My initial goals were to research and write for Chinese instruments, to experience the Chinese approach to teaching composition, and to learn from a country which remains too-frequently misunderstood by the rest of the world. That I am still here is a testament to the supportive relationships with performers, friends, and mentors that have formed along the way, as much as it is due to the magic of Chinese music and a lingering feeling that I am only at the start.

Xia Yuyan 夏雨言 is a virtuoso performer of pipa 琵琶, a Chinese plucked string instrument. She was born in 1991 in Jiang Yin City, Jiangsu province and came to Beijing alone at age eleven to pursue advanced study with a major teacher. Our professors introduced us shortly after my arrival in Beijing, and we began what has become an ongoing three-year project of composing, performing, and recording new works for pipa.

The collaborative process for my first piece proved to be quite difficult from the onset. What Yuyan found elegant, I found cliché; what I found elegant, she found incomprehensible. While performers I had worked with previously were largely deferential to my ideas, Yuyan took no hesitation in telling me what to trash and that I simply had to do better. We met week after week one-on-one, and I became a bit of a pipa roadie, attending every rehearsal and concert she gave within a six-month span. Frustration eventually gave way to friendship, with us learning when to stand up for ourselves and when to trust one another. The answers lay somewhere in the space in between — not in an “East-West” fusion sense, but in the symbiotic give and take between our aesthetic ideals and the resulting sounds.

This first piece was For Summer Rain; the title is a translation of part of her name rather than being obliquely programmatic. (There is always the question of audience with new music, but for this work, my first audience was Yuyan). It was premiered in October 2015 in Beijing.

A trio for Malaysian yangqin performer Jia Wei Ng, American saxophonist Jason Pockrus, and Yuyan followed. I touched the ground while floating away was premiered the following spring in Beijing.

Our most recent collaboration — a work for solo pipa with voice (琵琶弹唱) named 空 (kōng), or Void — was finished this past March, and then presented in two lecture recitals at Tsinghua (清华大学) and Shandong Universities (山东大学哲学系) before Yuyan’s premiere of the work at the 21st CHIME (Chinese Music in Europe) Conference in Lisbon this past May.

The chance to present lecture recitals together was a welcome opportunity to share our musical exchange on a broader scale with audiences who had little exposure to Chinese instruments. Articulating in our respective second languages what our collaborations have entailed was a daunting experience for each of us. But in Yuyan’s view, the best way to embrace both life and working together is shunqi ziran 顺其自然: to go with the flow.

With an instrument of such rich capabilities, perhaps the only limitations are the ones the composer self-imposes.

While matters of technical understanding towards an instrument become easier with time, there is still much to learn about pipa as well as from one another. With an instrument of such rich capabilities, perhaps the only limitations are the ones the composer self-imposes.

My work with Yuyan represents but a sliver of her interests and activities as an artist. Plenty of performers are technically proficient, but her individualistic spirit and expressive range are a rare combination. These traits have led Yuyan to branch out far past what might be considered “traditional pipa performance”.

While we were rehearsing For Summer Rain, Yuyan introduced me to Jiang Shaofeng 姜少峰 (b. 1987), a Chinese dancer who has fallen in love with American tap dance. For the past several years, they have been creating works blending pipa, dance, and percussion. One example of this collaboration can be heard in a composition of Yuyan’s called Encounter:

Their duo of pipa and tap dance morphed into a multi-media performance group called No.Future between 2016 and 2017. Comprised of pipa (Xia Yuyan 夏雨言), dance (Jiang Shaofeng 姜少峰), beatbox (Gu Hong Long 贾宏龙), and voice/keyboard (Pei Ying Yan 裴颖妍), the ensemble performed in various venues around Beijing. Yet, as Yuyan pointed out, it can be difficult for independent artists in China to stay together in groups long term without sponsorship or the support of agents. 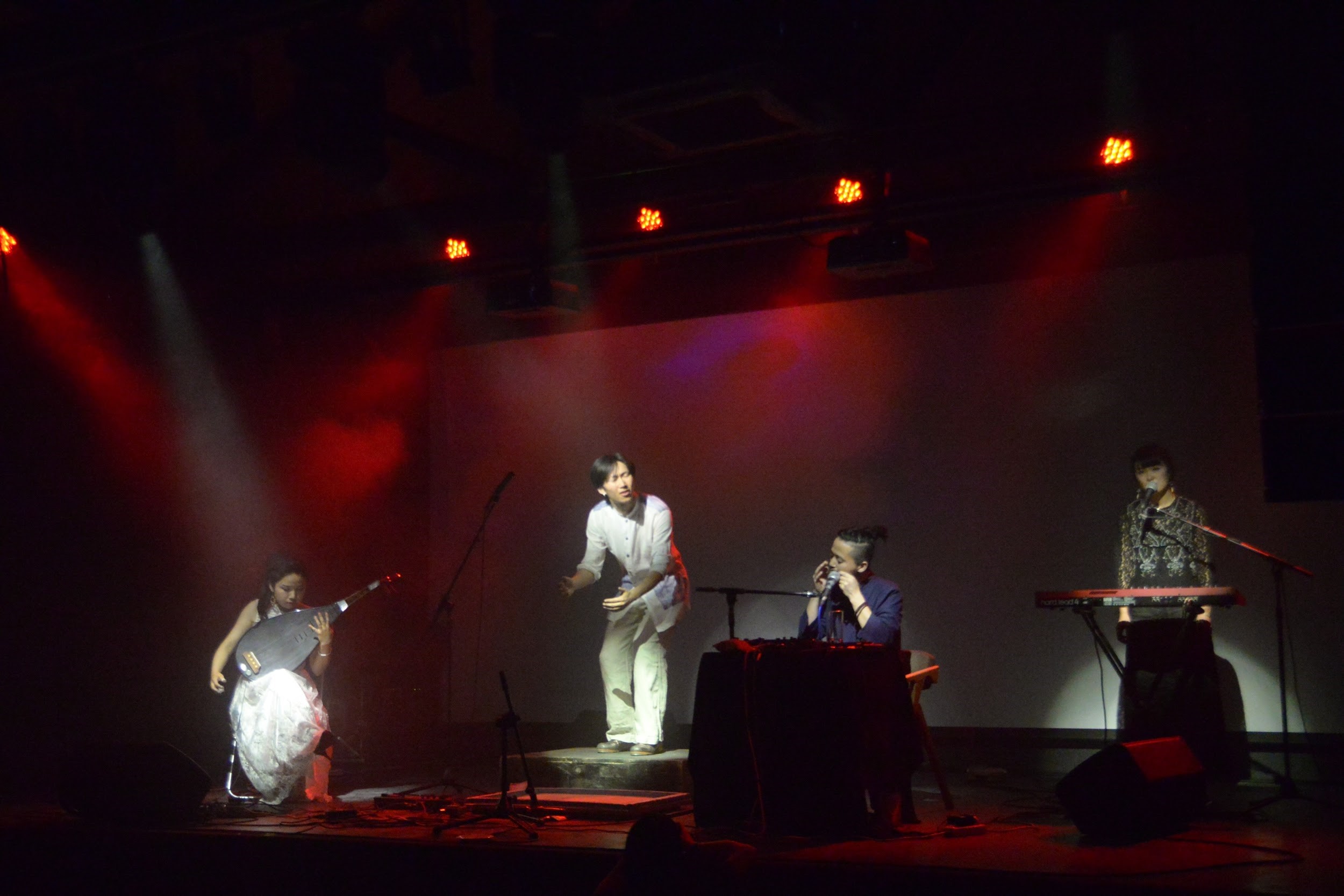 Photo of No.Future in performance, provided by Xia Yuyan 夏雨言.

Other projects Yuyan has been involved with include improvisational workshops with modern dancers in Sichuan Province in August 2017 and a series of collaborative performances with Shaofeng and artist Luan Jiaqi 栾佳齐. Through amplifying Yuyan’s instrument and the board upon which Shaofeng dances while simultaneously placing an amplifier beneath a canvas, Luan creates artistic conditions in which paint can catch the paths of the vibrations they produce. 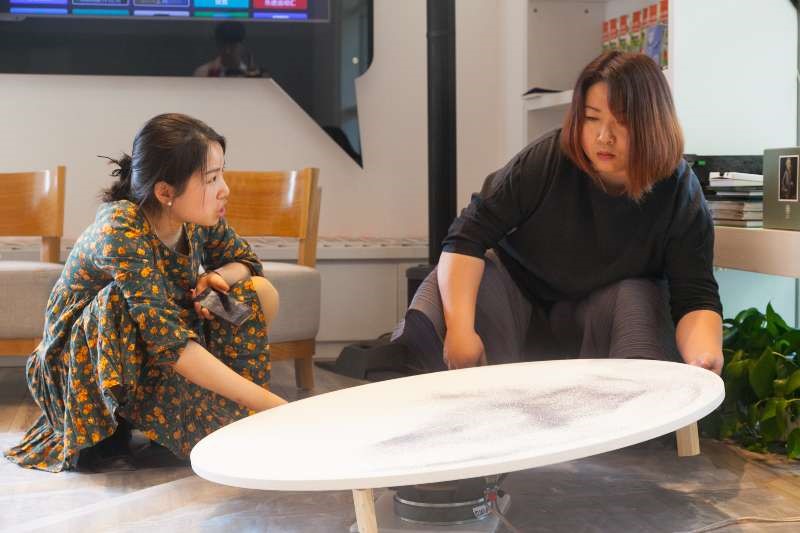 As Yuyan stated, “My current belief since leaving conservatory is that life is not only about music. Moreover, it is not merely a matter of practicing one’s instrument. The most important thing is how one thinks, how one feels — towards life, or towards one’s inner states. And then you must decide the artistic way in which you want to express yourself. So this is why I am so interested in photography or painting: I feel that all artistic media contain their own music.”

“All artistic media contain their own music.”

“Without exchange there is no understanding” (没有交流，没有理解) — Gao Weijie 高为杰

I am not interested in pursuing a direct transfer or imitation of media from Chinese to Western music or vice versa. Rather, what the process of writing for Chinese instrumentalists— and particularly for Yuyan — has done is to expand my conception of sound and timbre, leading me to write music that looks carefully at the nature and acoustics of any given instrument in order to build a delicate palette exploring texture, color, and forms of release. In moving back and forth between projects for Chinese and Western instruments, it is the dialogue, the push and pull, the constant shifting of the ground beneath one’s feet that challenges and excites me as a composer.

I am not interested in pursuing a direct transfer or imitation of media from Chinese to Western music or vice versa.

Yuyan too has been impacted. As she put it, “Our collaboration has opened me up to a new form of musical expression. Working with Rachel has allowed me to grasp that silence is also a type of musical language.” 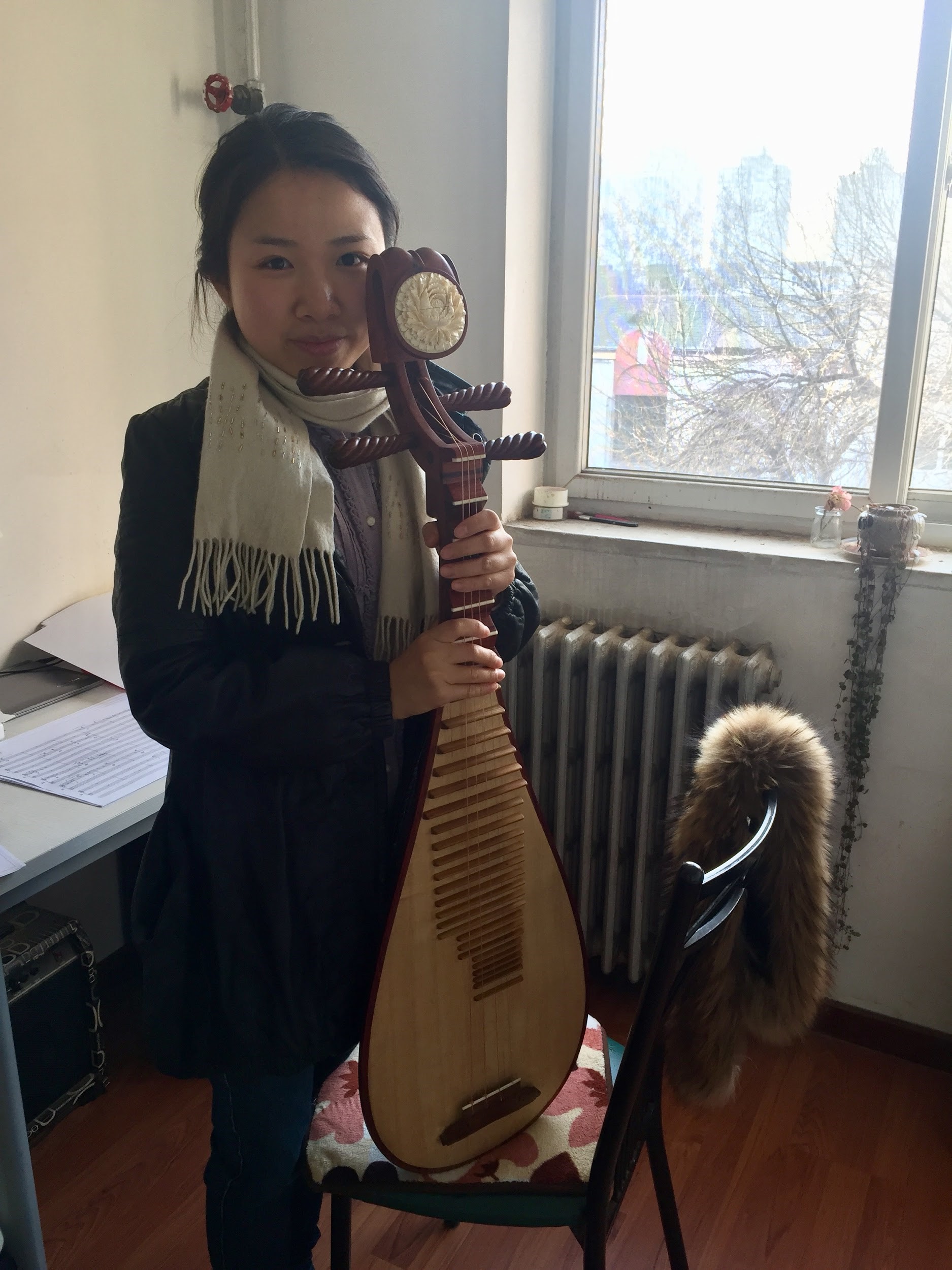 Yuyan after a rehearsal of 空 kong in March 2018. Photo by the author.

When Yuyan and I began our collaboration in March 2015, she joked — and in hindsight, it seems she was serious— that once I discovered pipa, I would not be able to turn my back upon it. We were not friends immediately, and I am not sure that either of us imagined that we would still be working together now, but some of the most beautiful moments of my life have been spent in her apartment, listening to the sway of the Chinese lute.