It was late July of  2010, and we stood lined up in pairs just outside the lobby of the REDCAT Theater in downtown Los Angeles. I found myself constantly adjusting the bottom layer of the tattered green-black garbage bag dress that was my costume as a member of the Tongues Bloody Tongues women’s choir.  We were a wild-looking gang of women, specifically placed at the end of a long and windy procession of musicians, with our hair teased out and plastered into swoops and swirls on top of our heads, black liquid eyeliner streaked in an arc of tears from the lower lid of one eye, fashioned to look like oil. As we waited, the accordion players in front of us made jokes amongst themselves while members of the drum core twirled sticks deftly in one hand or stood quietly, waiting for the cue to move.

A friend of our troupe burst out of the lobby doors and into the REDCAT parking structure where we waited, exclaiming, “It’s sold out! They can’t fit any more people into the lobby.”  Excited chatter rose from the line. The tension between us all grew thick and the garage seemed to grow warmer.  A few of my fellow choir members checked the batteries of their bullhorns, pressing the red button in and out in a series of audible clicks. 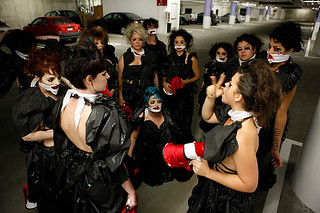 In five minutes the Los Angeles-based music collective and marching band known as Killsonic (KS) was about to make its REDCAT debut, literally and sonically invading the cramped lobby with a bombastic cacophony of horns, accordions, full drum core, Amazonian war cries and amplified shrieks.  We were to make our way through the center of the crowd and divide into two lines, furies on one side and musicians on the other, and we were to engage in a full-on sound battle.  The audience could not escape, were not meant to escape. They were now both full participant and witness to this musical frenzy, showered in sound and confusion only to then be escorted into the theater space itself surrounded by both band and choir. 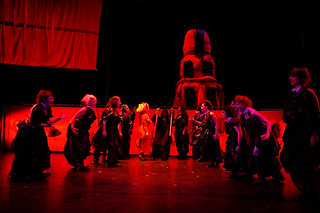 It was a moment that in many ways symbolized the creative culmination of the long-time and ever-evolving sound of the band and the city it hailed from. By the time the band had made its way to the New Original Works Festival there that July, it had grown from a little-known smallish avant-garde jazz ensemble made up of primarily music students into a sought-after 30-plus person marching band with a membership comprised of people representing all walks of life, music training, education, financial, and occupational backgrounds.

My introduction to the group happened in the early ‘00s when good friend, composer, and KS founding member Brian Walsh heard me doing vocal warm ups in between teaching students at the music store where we both taught in the San Fernando Valley.  He asked me if the sounds he had heard emanating from my studio had come from me.  Not quite sure how to interpret the question, I answered with a sheepish, “Yes, why? Was it too loud?”  Brian just smiled and asked me if I’d like to sing in a new project he was involved in.

Over a series of many Tuesday evenings we would all cram together in the living room of a small house in Highland Park and run through song after song. We endured long, sometimes agonizing breaks in between while Brian and KS founders contrabassist Michael Ibarra, drummer “Princess Frank” Luis, guitarist Minh Pham, and percussionist Dominique “Chief” Rodriguez would debate arrangements and timing.

It was during these various rehearsal cycles with KS, in all its shapes and variations, that my foundational understanding and approach to creating music was challenged and ultimately blasted apart. I realized quickly that being a part of this group was not going to lead to the makings of singer-songwriter-y stuff. I would not be singing with my guitar, and the sounds demanded of me as a vocalist would not be the gentle, soft, and harmony-laden sound so often associated with the music of Southern California.  It would instead demand growls and guttural sounds in some places, whispering and soft crooning the next. It would demand that I surrender all I knew about “verse chorus verse” and be an active creator and listener of something completely foreign to my classically trained ears and thinking. Creating the material needed for the choir’s parts in Tongues Bloody Tongues meant turning the traditional song form on its head, breaking it down, and patching it back together in a way that would create a sonic picture of a sandstorm in the desert or the call of tropical birds in the jungle. At times we were provided with only a verbal description of a feeling or landscape and other times we were introduced to the cues and symbols used in John Zorn’s game pieces. The process summoned both the beautiful and ugly from us vocally and coupled it with the ceremonial make up of  either chanteuse or madwoman, depending on the performance.

Los Angeles itself is a city of duality. At first glance one may see only the gorgeous and sprawling campus of venues such as the Walt Disney Concert Hall and the LA Opera atop Bunker Hill in downtown L.A. These are spaces where the classic canon of high art is performed on a regular basis. One may see that audiences for such places and repertoire is often comprised of a rather homogeneous community: older adults of a certain income bracket, education, and experience of life and art.  Yet one only has to walk a few blocks down the hill from such revered centers of culture to experience the truth and reality of downtown L.A.: an endless stream of homeless men and women sleeping in doorways and sidewalks, many bussed in and dumped from facilities and towns unable to contain or rehabilitate them.

Killsonic held the right musical pedigree to play the more refined stages of Bunker Hill, but it was from the less glamorous part of the city that the band declared itself musically. With its sinister horn parts and rapid-fire percussion, the group took to the streets and subways of downtown L.A., to those seen but unspoken of places and energies, and created music that erupted in frenzied harmonies and dissonance only to then melt into a slinky groove or Latin-infused rhythm of the neighborhoods they lived and worked in.  Killsonic at UCLA’s Royce Hall

As the band grew in popularity and exposure, it refused to change its tone and approach, instead bringing these truths into more open public spaces. The band eventually took its work right into the spaces it rebelled against: outside on the plaza of UCLA’s Royce Hall, around and through the art and sculpture of LACMA, the slick and hip art galleries on the Sunset Strip. In 2010, Killsonic marched itself straight into the audience of the black box theater of Walt Disney Concert Hall to tell a wild music tale of the history of Iraq.

Los Angeles is also a city that is easy to hide away or get lost in. The sense of community that can be found in other creative towns such as Chicago or San Francisco is much less present here.  You have to work to find your tribe, and you have to remain dedicated to sustaining and maintaining it. You have to be fierce in your creative work, because the number of people here pursuing similar endeavors is exponential and there is much audience fatigue—too many people performing in too many spaces with all the prospective audiences generally too wrapped up in the reason they moved here themselves to take time out to go see your show or play or gig or reading. That Killsonic was able to create a growing and loyal musical community and space for itself in a town where such things are difficult is truly incredible.

The performance at REDCAT signaled the beginning of the group’s dissolution. This was not because of conflict, but because over the course of its ten year history, a varied and colorful collective of musicians, composers, music educators, filmmakers, visual, and performance artists had grown in confidence and talent through the continued supportive environment of the collective itself. The time had come for its members to reinvent themselves once again, much like the ongoing reconstruction of Los Angeles itself.

El-Haru Kuroi—a trio made up of Michael A. Ibarra on bass, Eddicka Organista on vocals and guitar, and Dominique “Chief” Rodriguez on percussion—emerged around the time of Tongues Bloody Tongues performances. The group has since garnered a substantial fan base for and acclaim for itself, carrying the Mexican and African rhythms often referenced in KS music into a more intimate and guitar-based setting.

Dominique also joined up with several KS horn players and another music store colleague, Charles de Castro, to create a group called the California Feetwarmers, a musical ensemble that came together to share their mutual love of ‘20s music and bring it to a public audience. The group recently found itself walking the red carpet at the 2014 57th Annual Grammy ceremony as nominees for Best American Roots Performance on Keb Mo’s “The Old Me Better” and appearing on the BBC.

And the person responsible for bringing me into this tribe, Brian Walsh, has and continues to compose and play in a wide variety of avant-garde jazz and new music projects, most recently in the group Gnarwhallaby, the Brian Walsh Set Trio, and upcoming performances at the 2015 Hear Now Music Festival this May with Brightwork newmusic.

In terms of my own work, the aleatoric approach to creating song and sound has crept into every aspect of my creative outlets, whether it be writing lyrics for a new rock-based project or creating textural landscapes for electric and acoustic guitar.  It eventually snuck its way into my column for Acoustic Guitar magazine this past year, with a step-by-step explanation of how to write a song by chance using using backgammon dice and online random sound generators. How very curious I have been to find out what happened to the folks that read that article and took the risk to attempt it.

October Crifasi is a songwriter, musician, educator, and writer with extensive experience teaching and performing nationwide, including several years on the faculty at the Old Town School of Folk Music in Chicago and as guitar coach for projects on the Great American Country Channel (GAC), MTV, and Lifetime Networks. She is a regular columnist for Acoustic Guitar and Classical Guitar magazines and also directs a private guitar studio for girls and women in the San Fernando Valley called Girls Guitar School. In addition to music, October lives a parallel life as professional comics writer and overall nerd. She can be found online at www.rocktober.org or on Twitter @OctoberCrifasi.