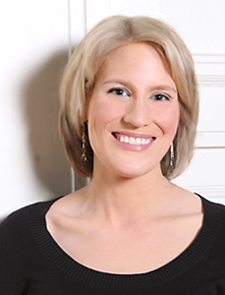 Kirsten Broberg
Tune in to Counterstream Radio on May 21 at 9 p.m. for an interview with Broberg, featuring full tracks of her music; or catch the recap on May 24 at 3 p.m.

Whether you’re a believer in fate or not, you kind of have to think Kirsten Broberg was meant to be a composer. Even from a young age it seemed inevitable; she recollects that, “I had trouble sleeping at night, even when I was 5, 6 years old, because there was music in my head, and I couldn’t get it out. I’ve been spending the rest of my life trying to figure out how to get it out of my head and onto paper, and heard.”

Compulsive earworms have proven to be a good motivator for pursuing composition; even with no other musicians in the family to provide a precedent, within a few years she was playing horn in the school band, and her parents recognized that her passion for music was not some passing phase. Now just finishing up her doctorate at Northwestern University, Broberg has already accomplished a pretty staggering amount, and her ambitions are even grander. In addition to her highly prolific and accomplished life as a composer and teacher, she is the executive director and founder of the Chicago-based non-profit Dal Niente New Music, with ensemble dal niente as its accomplished performing arm. She’s drawing up plans to start her own contemporary music festival in the upcoming year, all the while tackling a wide array of commissions.

But most important is still her own music. Broberg’s nocturnal earworms may be a fanciful explanation for her abilities, but this sort of connatural generation of musical material does actually do a fair bit to explain the allurement of her music. What it presents to the listener is a rich canvas which isn’t doing much to pull you forcefully one way or the other. It’s not imploring you to intellectually engage its own interior logic—although it is tightly and skillfully put together. But neither is it telling you what to think or how to feel, since it wasn’t birthed from some sort of Romantic desire to directly express inner turmoil or anything like that. It’s like an abstract visual; you can cogitate the technique, or consciously try to adapt the shapes and lines into something that has personal meaning; or you can stand back and take in the color, the form, the gestures as an aggregate, and really feel it.

This visual analogy isn’t out of hand, either—while often her own working habits approximate a sort of cerebral transcription, she also will use an imaged approach to plan out her music—and it’s probably a more literal process than you’d guess. She explains, “I finish the piece, and then a few months later I find the sketch, and its scary how much it looks like the gestural profile of the piece.” Her work Constellations for two pianos and percussion quartet was started on such a premise; spiral galaxies and brilliant starlight become visual contours on the page before notes on a staff. But while the title may guide you to think of Orion or Cassandra, the actual piece isn’t some sort of mawkish paean to mysterious galactic forces. The actual effect, from the stream of grace notes in the beginning to the sturdy yet serene fundamental iterated by the piano at the conclusion, doesn’t evoke huge flaming balls of gas so much as something way more recondite: It evokes itself. It totally embraces the most fundamentally ineffable qualities of music, so much so that you can’t even point to the generative techniques for description like you can with something like spectralism or minimalism or whateverism.

But even if it’s hard to really pin down, it’s still always expressive and dramatic. Her real gifts towards those ends are with sound and form—which, it turns out, she doesn’t actually separate all that much. To wit: “I like to use timbre in a way that’s structural. It’s not just a decorative feature of the piece, but it actually has something to do with how the piece progresses, and what are important elements in the piece, and what things are developed.” In Constellations, the metallic opening figures evolve into the deep resonance of the piano pretty frictionlessly; the journey of the piece is about, at least in part, that very change in timbre. Or, in her five-movement work Resonant Strands, the continuum of sonic possibilities inherent in a piano, bowed piano, and string quartet really provides both the micro- and macro-structures for the entire piece, from the smallest forces (Opening, an extractable movement for solo cello) to the entire ensemble. The seamless progression of the materials has everything to do with the success of the piece; in fact, all five movements might go by without you really being aware of the transition at all. It’s part of the game plan.

And you might sit in the concert hall afterwards and be profoundly affected by a piece like Resonant Strands, but still have nothing really concrete to grasp on. But that’s fine; it’s an hoary truism, but one that bears repeating sometimes: words aren’t always enough. That’s why some of us get into this profession, and it might be that those who understand it best are at an advantage.