Throughout this series of posts, I am presenting portraits of people and places of the Little Cities of Black Diamonds region in Appalachian Ohio. Each post focuses on sounds and how paying attention to them can give insight into issues such as labor, protest, recovery, and social life. Recording and carefully listening to these sounds can also suggest ways of bridging between place and creative sound works.

“You want to get a badass sound, man? Check this out,” says a young assistant working at a gas and oil well drill site. I am standing next to a small opening in the ground, perhaps a foot across. It is a cold December day, and I join an independent driller and his crew to record them as they work on the well. Two assistants fill up buckets with limestone, and the rocks are slowly thrown down the hole. As the rocks descend hundreds of feet, they bounce randomly off the walls of the well. A few seconds later they begin to hit the bottom, and the sounds that travel back to the surface are sharp, percussive, and reverberate through the long tube of earth. “Sounds like a gun ricochet,” says one of the men. “Yeah, or it’s like water,” the other remarks. To me, it sounds like fireworks coming from the wrong direction, and I note that the sounds of the rocks measure the distance traveled into the ground. They send sound waves down and back up, vibrations that we feel racing back out of the hole. Fortunately, nothing else comes up with the sound. “You better stand away from that hole a little bit,” says the driller, “the sparks going down in there may light some of the gas. It might do that, it might not. I heard it yesterday go ‘Whoom!’ before gas fire shot out…”

Workers throwing limestone rocks down a well before drilling.

This drilling site is in a small clearing in the woods. The rig sits in the middle, a 1956 model that is attached to an old truck from the same year. The rig’s appearance looks as if it couldn’t possibly work. Yet it does, and natural gas powers it from a nearby well. With a long hiss, the air is let out of the line and the motor starts. Gears, wheels, squeaks, and cables all conspire to create lurching rhythmic patterns.

The drilling begins. The drill bit does not rotate; instead, it pounds. The pounding is both heard and felt and, from this point on, shouting is the only way to communicate. Behind the rig’s controls, the driller looks like a conductor of a musical ensemble: his rhythmic movements are in tandem with the motor and his many years of experience make his continual adjustments to the old machinery graceful. There are many levers that he is simultaneously operating, allowing him to add an inch of cable at a time to the drill’s length. In this dangerous and unstable environment, I am reminded that he can’t see what is happening below the surface; he is working by knowledge, touch, and sound. The rhythmic regularity of the pounding sonically connotes his years of experience and his control over the machinery. At the same time, variations in the intense pounding tell him what kind of rock he is drilling through and at what speed.

Later that day, I leave the drill site while the men continue their work. As I walk away, the overwhelming sounds of drilling fade into the distance yet are still throbbing in my ears and stomach.

“Could I tell you a little story about that?” asks Joshua “Judd” Matheney on a sound recording from the Little Cities Archive. The recording was made in 1988, and Matheney speaks of his family, childhood, and work as a state mine inspector. The sound and grain of his voice reveal his age and regional accent as he recounts his life, and his descriptions of working in the mines are vivid. For example, the sounds of controlled explosions—what he calls “shooting down a hole”—were frequently heard. Matheney also remarks on his experiences as an inspector and of getting along with men and women working in small family mining operations. Throughout, Matheney’s voice is quietly heard on the cassette tape just slightly before hearing it at full volume, a tape “print-through” that has the ghostly quality of pre-echoing his own voice.

Interview with Judd Matheney. Courtesy of the Little Cities of Black Diamonds Archive.

Matheney continues his story, and talks about “sounding” the roof of a mine to check for safety:

I went in a little mine up Pittsburgh Holler one day—couple of men working by themselves. And I looked up at the roof and there was just like a circle around it. …I said, ‘Let me have your pick a moment.’ And, uh, I sounded it with a pick, a customary way of checking the roof. And it sounded a little drummy, and I said, ‘Fellas, I believe that’s dangerous.’ …One of ‘em handed me a pinch bar, and I pinched a little bit, and finally got a pretty solid hole. I chipped in, gave a good pry on it, and there was big circle of slate, at least six foot across, and there was this cone shape. …It would’ve mashed those two men easily. …Of course all men didn’t escape them kind of conditions, many men got tangled up with them and lost their lives.

The “drummy” quality of the roof indicated—to Matheney’s trained ear—an unsafe mine. Hillel Schwartz refers refers to this process of tapping the roof of mines as “jowling,” a term used in the UK and dating back to early coal mining there. Matheney’s ability to sound the mines as well as a lifetime listening to those operating them served as a means of not only maintaining mine safety, but also building long-term rapport with miners.

Both of the above examples are brief glimpses into the dominant industry in the Little Cities for nearly two centuries: extracting energy in the form of gas, oil, and coal. As I listen in, I am reminded that the workers listen, too, as part of their jobs. For them, listening becomes seamlessly integrated into their routines and keeps them safe, a sonic tool to discern danger. For my own practice, I listen to these archival and contemporary recordings repeatedly and carefully. David Grubbs suggests this process of repetition reveals facets of recordings that cannot otherwise be heard, and can transform them into musical gestures. I focus on the grain and hiss of the deteriorating archival recordings; the machinery and its interaction with the land; the rhythmic and melodic pacing of the workers’ words; and their stories. I pick up on the overlapping cadences of labor and everyday life, and they seep into my own work as I sample and collage them together.

The recordings make audible an unstable and changing past, as Judd’s voice moves forward to meet us in the present. Observing the independent driller of today shows his struggles to survive amid an uncertain work environment and larger corporations moving in to the area. This in turn points to yet another future iteration of the extraction–boom–bust–destruction cycle. I hear the complex tension between labor and environment unfolding over time, and the arc of people’s lives coming and going. I listen to the voices of these people coming together contrapuntally, and also listen for new voices to break this cycle, opening new ways of thriving in the region that are not bound to extraction alone. 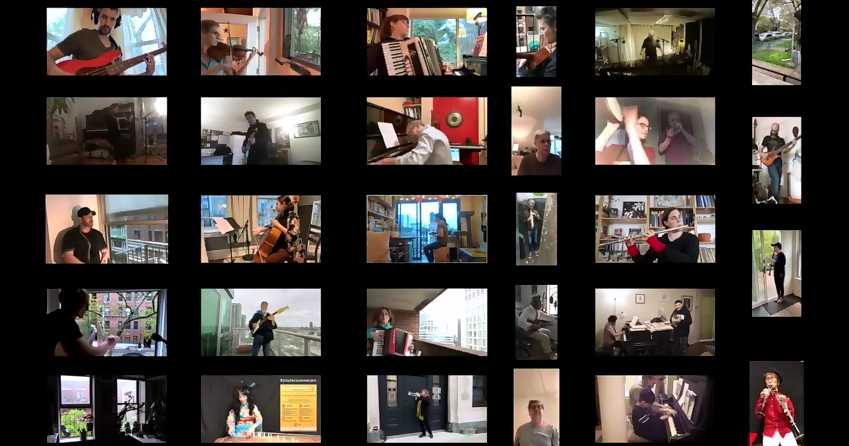