For those who are ready to add live streaming to their concert presentations, there are a pile of technical preparations and considerations to think through. Before we delve into the technology behind live streaming, let’s look at where it will be hosted.

Make it easy for your existing audience and your potential fans to find your live video by hosting it where they gather, and linking the video to as many other locations as possible.

The goal of live streaming is to reach people. To reach people, go where the people are. More specifically, go where your people are. Make it easy for your existing audience and your potential fans to find your live video by hosting it where they gather, and linking the video to as many other locations as possible. Personally, I have streamed to Facebook Live, YouTube, UStream, and Livestream.com. The DIY composer in me suggests you go with the free services like Facebook and YouTube. The tech-geek administrator in me likes how Livestream.com works. So let’s start with the free services. But before we do that, it’s important to know a bit of technical lingo.

In the next installment, we will look at how to stream with iOS and other mobile devices and beyond. Many simple stream connections can be created using just the phone in your pocket, but it’s helpful to be familiar with a different type of connection: RTMP.

Real Time Messaging Protocol (RTMP) is simply the way audio and video are streamed over the internet. All streaming to Facebook, YouTube, and Twitter can be done via RTMP. Regardless of what you are using as an encoder, all you need for RTMP streaming is the “server URL” and the “Stream name/key.” 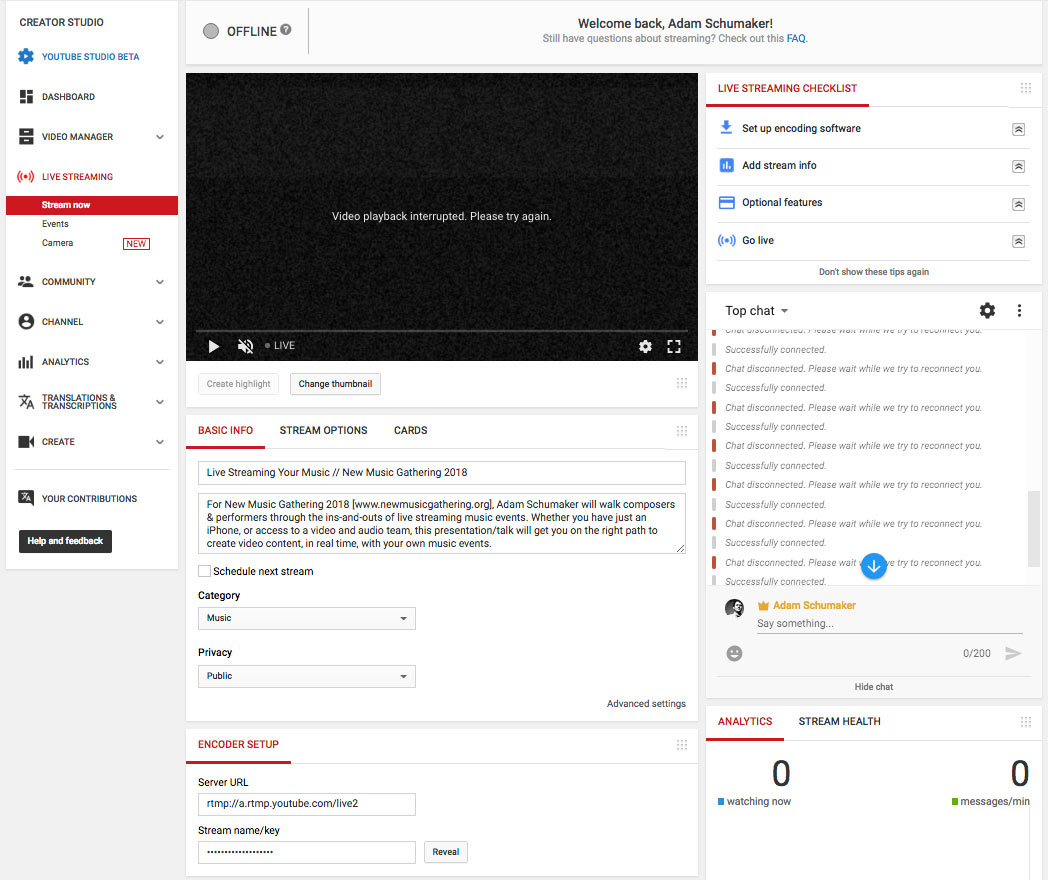 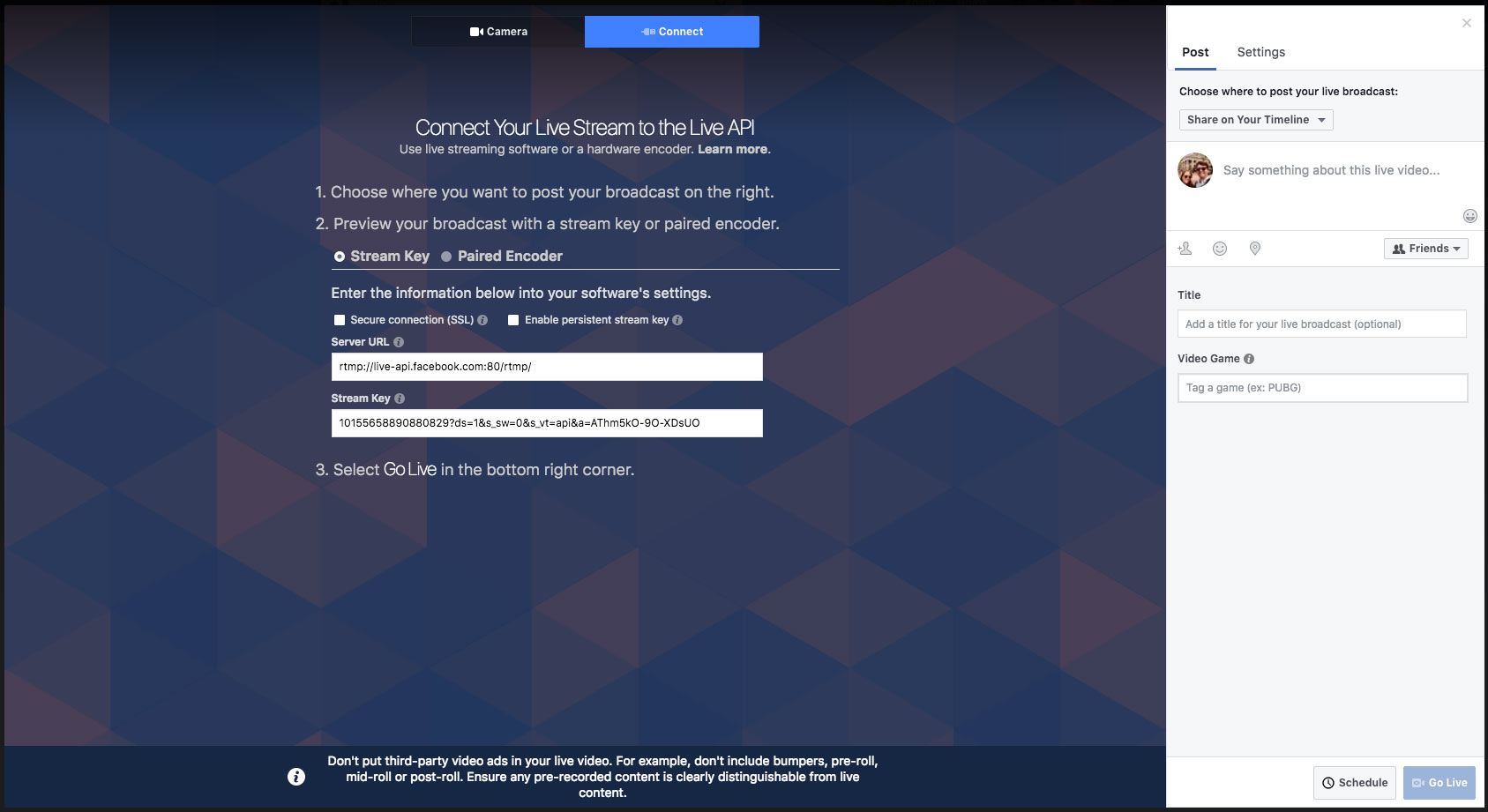 Facebook, YouTube, and paid providers all have RTMP connections. This means that you can stream to the platform without a mobile device. Instead, you can use external cameras that send video to external encoders for fancier multi-camera systems. For the novice, try using a mobile device for your first live streaming projects. For those seeking multi-camera and alternative connections, understand which platforms are able to connect to your encoder via RTMP.

Facebook Live is a go-to streaming platform because just about everyone is on it. With close to 2 billion users, chances are, most of your friends are on it. Despite recent changes in the algorithm, the delivery system is effective. Plus, people know how to find you and your page, and you, or a social media assistant, can feverishly share the link with other pages once it goes live.

In my experience, although Facebook live is great at reaching people, the watch times are usually less than those captured via other platforms. Maybe it’s because we are all trained to scroll through our Facebook feeds for the next thing, or maybe the compression Facebook applies to the live videos is less appealing. The average Facebook view times have been clocking in around 1 minute per view. I like to think of Facebook Live as pure marketing rather than a true audience connection.

For best practices, including tech specs (which will be covered next week), read this Facebook article.

We typically don’t think of YouTube as a social network, but it is. If you have taken time to recruit subscribers to your channel, they will typically receive notifications when you are live, depending on their personal settings.

1.) When you drive people to your YouTube live link via your other social media accounts and email, they statistically stay longer.

3.) YouTube can stream at higher resolutions than Facebook’s 720p. Live streams also populate to your YouTube channel for future views, embedding, and sharing.

These social media platforms are less known for streaming, and honestly less known to me. Perhaps these platforms are ripe with opportunity! For Twitter, read How to create live videos on Twitter. For RTMP streaming to Twitter, read this article. Twitter can also connect directly with Periscope, a streaming network. For Instagram, the live video feature is part of the “stories” section of the app.

All of these networks are less known for music, but as expressed previously, if your audience is there, then by all means stream there!

When I started streaming with The Gilmore Keyboard Festival, we chose Livestream.com as our video streaming host. This was partially because the Detroit Symphony Orchestra and several other classical music organizations used Livestream.com as their streaming host. At the time, Facebook Live and other young streaming platforms were difficult to access when using a more traditional camera setup, instead of mobile technology.

There are a few good reasons businesses use Livestream.com as a hosting service.

1.) These platforms offer excellent analytics, including time viewed; regions down to country, state, city; ways the stream was accessed; and on what kind of device the stream was viewed.

2.) They can store videos, published or unpublished, and allow the embedding of these videos onto websites.

3.) Simulcasting, which deserves its own header.

Simulcasting is simply the simultaneous broadcasting of the video signal to multiple destinations. Social media platforms do not simulcast. Paid hosting services can. Using Livestream.com as an example, it is possible to send multiple video streams to multiple destinations at the same time. This multiplies the reach of a live stream by however many simulcasts you have access to.

For my work with The Gilmore, we try to gain distribution through the Facebook page of the artist, the venue, presenting partners, as well as our own, resulting in a minimum of four simultaneous live streams. The increase in viewership is impressive.

In the next article, we will briefly touch upon hard-wiring a simulcast, if you want to step up your live stream reach without purchasing a broadcaster subscription service to do the simulcasting for you.

With marketing, usually the more you can do, the better. Assuming you are a one-person show or a small team, I recommend marketing your live stream alongside your live performance, in as many digital places as you can.

Facebook Events are a great way to connect with your friends on Facebook, and remind them that they can join the event from afar because it will notify them of the live stream. The live stream link and info can also be posted inside the event. Facebook also keeps great stats. More importantly, if you can get a few people to co-host your event on Facebook, you will greatly expand your reach, your ability to invite audiences in your hosts’ networks, and you will also have multiple destinations for your stream (on the co-hosts’ pages).

Twitter is more immediate, so a little pre-tweeting and then live tweeting during your event, with links to the stream, can help move online traffic to your live stream.

Email is still a powerful source of reaching people. If you haven’t already started a virtual mailing list, now is a great time to do so! Emailing your audience about the concert, including the live stream link prior to and near the time of the event, will help bolster your stream audience.

Blog about your concert and live stream. If you cannot get an interview on a friend’s blog, a local media interview (radio/tv/podcast), or an article in a reputable publication, then you must do it yourself! Create an interesting discussion about your upcoming concert and make sure to including streaming links, and how and where to launch the live stream.

There are many places to host your live stream. It can be overwhelming. I recommend you find the platform where your audience is, and host your streams there so they are accessible to the most people who support you. Then make sure you review the ins and outs of creating a live stream on your desired platform. Next week, we will cover the technology behind DIY live streaming, including some tech suggestions that I have personally used or researched.

Adam Schumaker’s compositional style still lies somewhere in the nebulous definition of post-tonal tonality & post-minimalist commercially pop driven art music . Schumaker’s compositions are influenced by the scope of the project, the mission, the collaborator, and the surroundings. Most of the time, pragmatic decisions drive creation. Philosophically, Adam believes there is no “right way” to compose… rather, there is just a more effective way, dependent on the task at hand. Adam began writing songs in high school and never turned back. His early songs had complex structures and interesting... Read more »