It was my son, Dylan, who first told me about Morel. I had just been liberated from the trial of reading Finnegans Wake. The Invention of Morel, a slim novella by the Argentine writer Adolfo Bioy Casares, seemed like a refreshing change of pace.

Throw away any source material that isn’t public domain and start again.

I had hoped to adapt Finnegan as a new opera for Long Beach Opera, who put up a production of my Tell Tale Heart in 2013.  They had so much fun with that, that they decided to commission a new piece. But the biggest challenge of Finnegan turned out to be James Joyce’s estate, notorious for saying no to everything. They put up too many hurdles (in Euros) for us to clear.  New lesson learned for my compositional process: throw away any source material that isn’t public domain and start again.

Which is what I did. I breezed through The Invention of Morel on the first reading. Written from the point of view of an anonymous fugitive hiding on a deserted island, the novella eventually introduces a strange group of tourists and the enigmatic Morel, who has developed an invention of devastating power. It’s a quick read but a deeply emotional one. I could feel and hear music as I read it—generally a good sign for opera. I was particularly drawn to the work for the fun of its intricate little puzzle of a story spiked with mad passion. For an opera, you obviously need that mad passion, something so emotionally charged that people must sing of their anguish rather than speak it. Morel has that emotional urgency and for extra flavor it’s also a sci-fi black comedy in a period setting. Finding material that is multifaceted in its elements but direct in its story line is what it’s all about for me.

I could feel and hear music as I read it—generally a good sign for opera.

The process of converting this hundred-some page novella into an opera was very much accomplished in collaboration with librettist Jonathan Moore, with whom I’ve worked on past operas and who knows a bit more about dramaturgy than I do. First, we broke down the entire story, talking through the individual beats of each character and the major plot points of the arc. Then we digested pages of the novella and turned them into dialogue. The last stage involved turning that story and dialogue into the libretto, where you have a rhyming scheme and rhythm, and setting it to music, down to the nitty gritty details of which syllable hits which note of the melody. Jonathan and I make a great team, as his expertise falls more in the high-concept dramaturgy at the beginning of that whole process, and I’m more comfortable where the rubber hits the road at the libretto end. I believe we ultimately went through almost 50 rewrites by the time we had gotten it into a performable state. 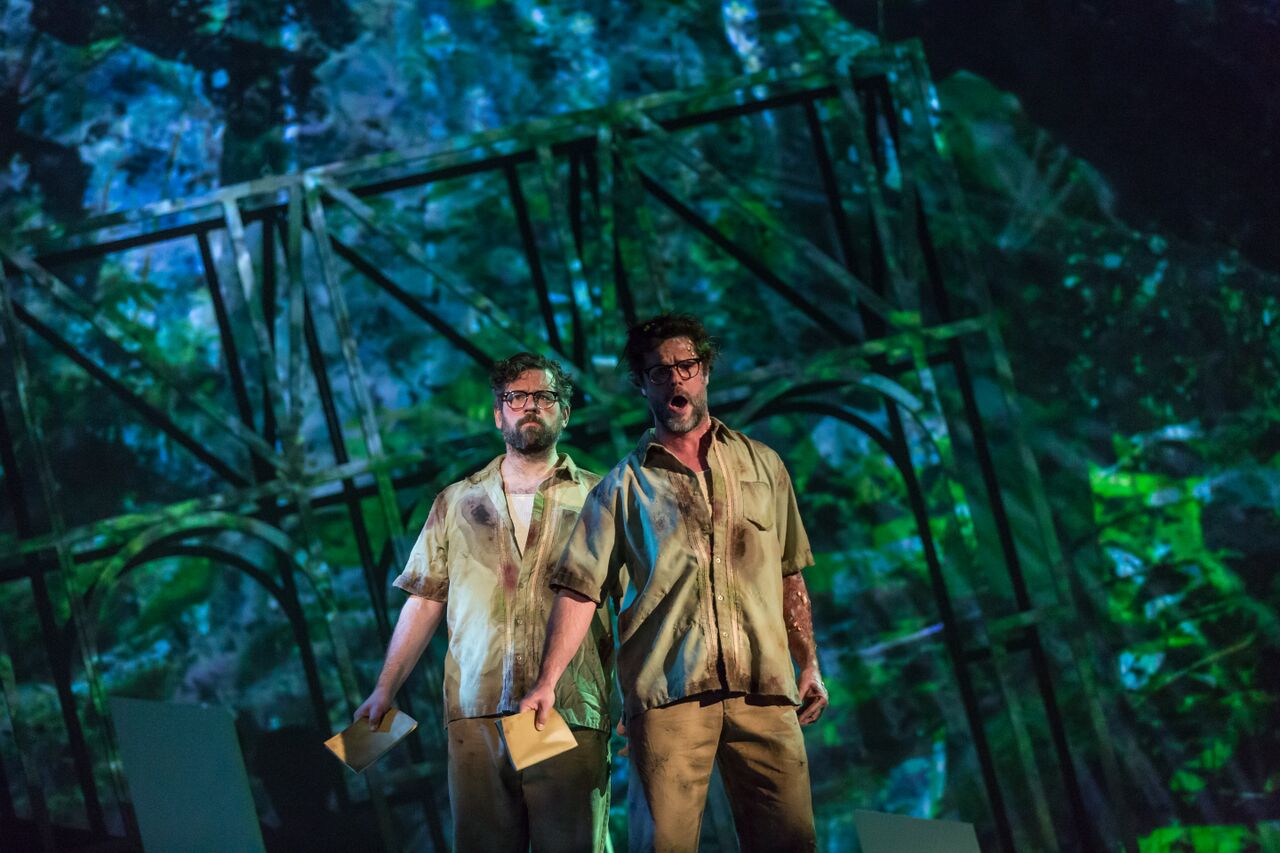 (Left to right) Andrew Wilkowske (as The Fugitive) and Lee Gregory (as the narrator) from the Chicago Opera Theater production of The Invention of Morel.

We departed from the source material in a couple of big ways. First, we shifted the time period forward about 20 years, from the 1940s to the 1960s. We thought it would heighten the drama to have the action take place in that post-nuclear world with all the resulting political upheaval going on in South America at the time. We also modified the science behind the titular “invention” of Morel. Mr. Casares’ gadgets would never have worked so we replaced his technology with more credible principles that were proven to be true by Star Trek.

Without revealing too much, I will say that a major theme in the libretto is about aberrations in the passage of time. Since music is all about time, such aberrations are reflected in the music.  That could mean a lot of repeated motives and patterns. I went so far as to strategically insert a scratchy, broken record sound effect in the score to flag some of these time anomalies. It was fun trying to get that sound out of a little chamber orchestra.

The main challenge has been getting the flood in my head down on the page in the orchestra’s language.

Since I started writing “classical” music, the main challenge has been getting the flood in my head down on the page in the orchestra’s language. It’s a communication, and the mission is to make it clearer and more perfect so the musicians can look at the page and know exactly what to do. After 30 years of chewing on scores, there is progress. The orchestral players in Chicago picked this one up very quickly, and I did a workshop with the Long Beach crew who also picked it up quickly — so I must be learning orc! 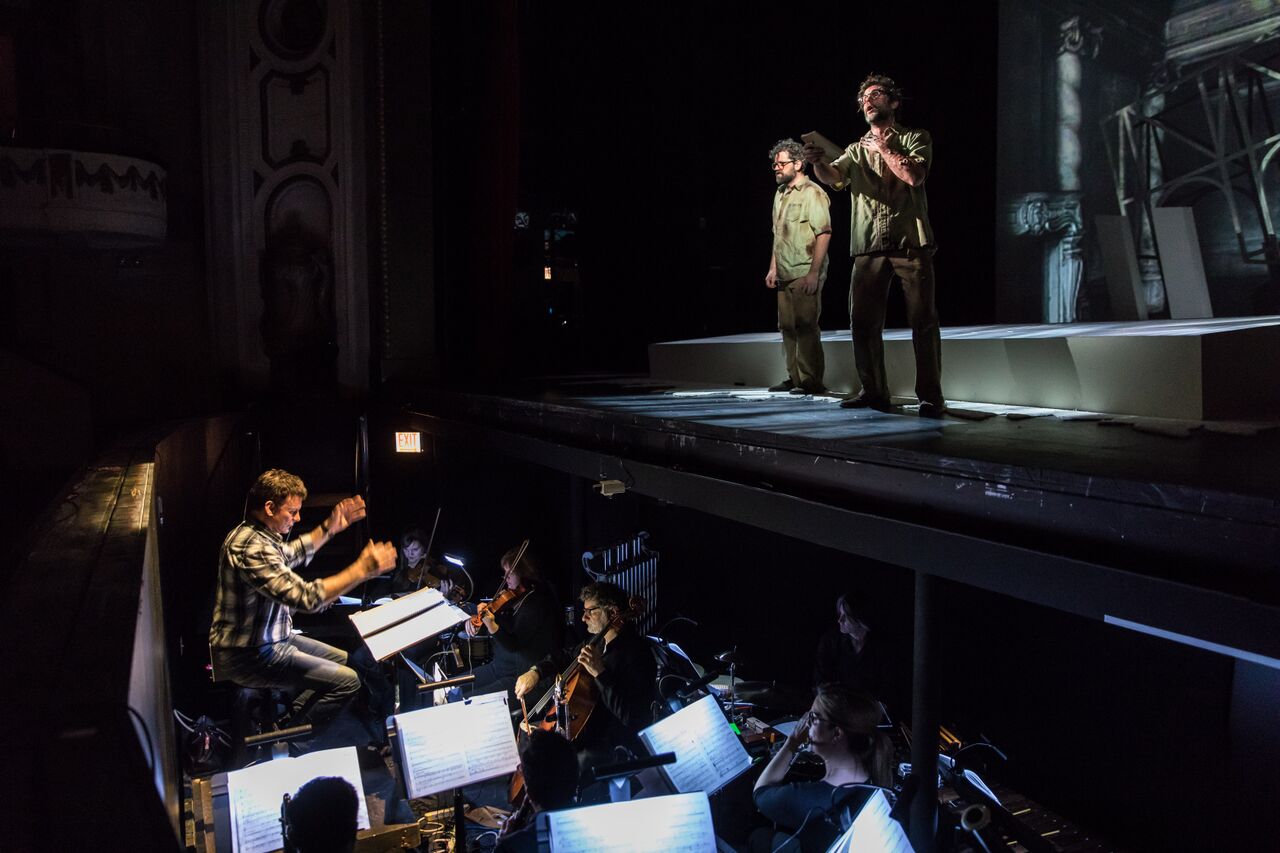 The music itself arrives as a God-given torrent. It just arises naturally from turning the pages of the story. The work is in harnessing it all to make it serve the plot. Innovation isn’t necessarily a goal for its own sake, but rather, something that arises spontaneously from problems that need to be solved. In my experience, there have been revelations that came to me when, “Darn, I’m here and I need to get there, so I’ll try something bizarre because I’ve tried everything else…” and that leads to a serendipitous reinvention of music in some way.

Once the story and libretto are all figured out, having that music come relatively naturally is a gift for which I’m grateful. There’s training, technique, and experience involved with making music work for you, of course, but the meat of it is instinct. A lot of it came to me from two decades as a hired-gun film and television composer—learning how to dig into a story and find specific musical language. The underlying literary material, the mechanics of the characters: those are all things in the physical realm that you have to deal with. The actual tunes, the music that comes welling up from the soul, that’s the gift that just comes naturally, and the vocation is to shape it and put it on the stage.

[Ed note: The Invention of Morel received its world premiere in 2017 in a production by the Chicago Opera Theater, a co-commissioner of the opera along with the Long Beach Opera which will stage the west coast premiere on March 17, 2018; there are two additional performances on March 24 and 25. – FJO] 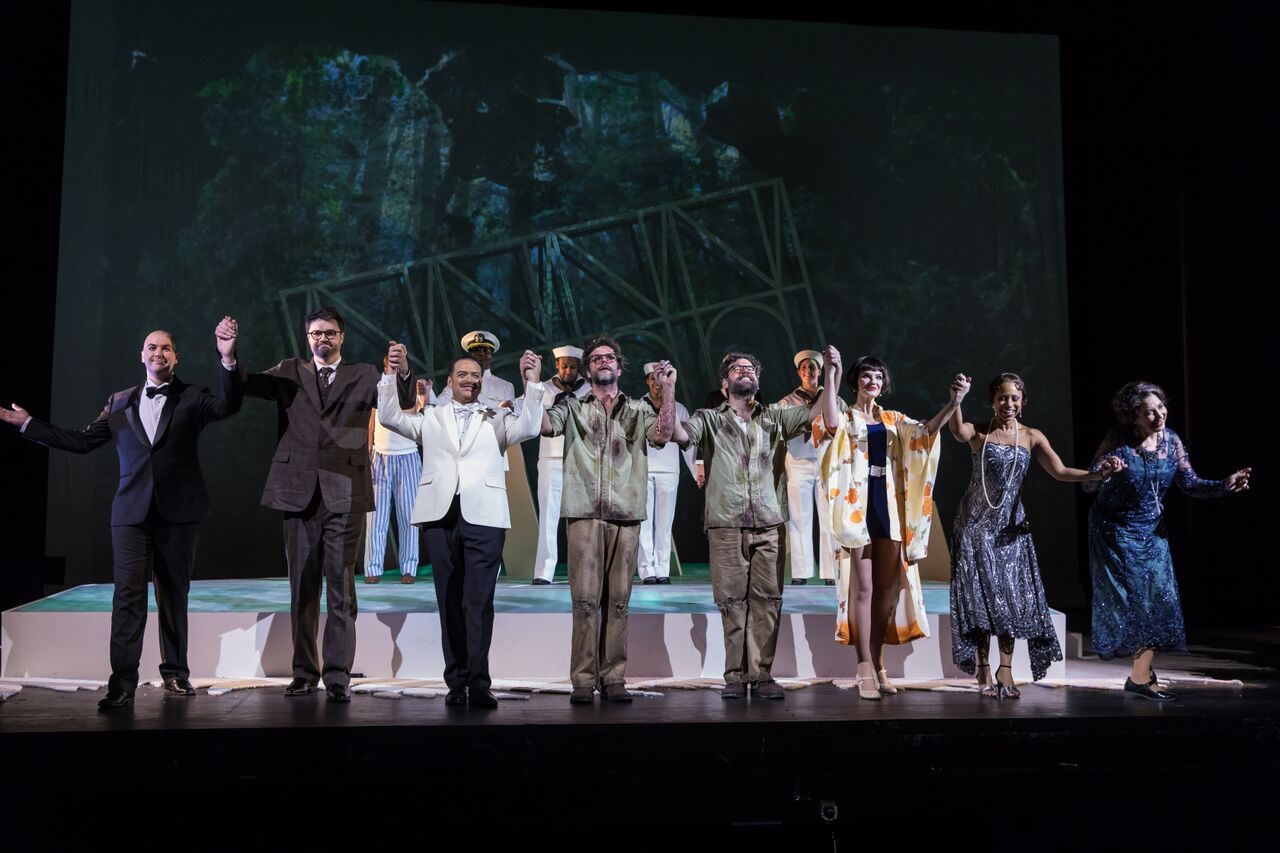 Stewart Copeland has spent three decades in the forefront of contemporary music as a rock star, acclaimed film score writer, and composer in the disparate worlds of opera, ballet, world music and chamber music. In 1977, Stewart formed The Police, a band that became a defining force in rock music. He spent twenty years as a successful film and TV composer, working for the likes of Francis Ford Coppola on Rumblefish and Oliver Stone on Wall Street. Stewart went on to form Animal Logic with Stanley Clarke and Oysterhead with... Read more »