While I have been pursuing compositional projects and researching Chinese instruments, so much of the learning that has taken place for me in China has come from extra-musical sources: the environment, the language, and the conversations and interactions with people whose life experiences do not match my own.

Upon returning from my first stay in China in 2016, I began to seek out works by living Chinese writers in order to help enrich my understanding of the country beyond the music I had studied. Librettist Kendall A. suggested the poetry of Zheng Xiaoqiong’s (郑小琼), and I was struck by both the power of her words and the evocations of a side of China I had only seen hints of. Zheng was a former migrant factory worker in Southern China; her poetry captures not only the daily life of workers and their conditions, but transforms it into a sort of music which dances on one’s tongue. (The Chinese noun for poetry is shi ge 诗歌, consisting of the characters for both poetry and song).

I was struck by both the power of Zheng Xiaoqiong’s words and the evocations of a side of China I had only seen hints of.

At the start, my Chinese was too weak to grasp the full breadth of her imagery in its original form. There were a few assorted poems available in translation online, and from there I began corresponding with her translators, who graciously sent along several others which they had finished but not yet published. I asked one if he might be able to connect me to Zheng Xiaoqiong; a few weeks later, we became WeChat contacts. From that time, her poetry was always on my mind. I returned to her work in Chinese last year, and began copying, memorizing, and reciting it to myself. After falling in love with one specific poem, Zheng Xiaoqiong gave me permission to set fragments of it, and invited me to come visit if I had a chance. In late April of this year, I arrived in Guangzhou to spend a weekend with her.

Zheng Xiaoqiong is full of life. She phoned just after I landed, the words spilling out of her mouth at a pace I could just keep up with. We had dinner that night before heading to her building, where she works as an editor for a publication about modern Chinese literature containing poetry, critiques on poetic theory, short stories, and essays. The beauty of the situation is that everyone employed by the publication lives and works in the same complex. This allows them some flexibility with time to pursue artistic endeavors, while maintaining the practicality of a consistent day job. (She was leaving for Germany for a week as a guest on a poetry exchange on the same day I left.) The proximity to one another allows the writers to have salons and readings to share their work each week. As Zheng Xiaoqiong said, one of the most important things to her as a writer was the access to consistent jiao liu (交流): exchange.

In fact, it was exchange which led Xiaoqiong to first become a poet. Because she was from a rural village in Sichuan Province, she had no chance to attend university; the sole option for leaving her hometown was through entering the factories. There she took solace in books which were passed around covertly after hours, and, at 22, she began to write poems which drew upon her experiences in spite of opposition from the factory managers.

When she asked about my plans for setting her poem the next day, I shared my ideas. As a composer and a non-native speaker of Mandarin, I knew that my readings would not match her own. Yet, to learn that she often reads her work in her native Sichuan dialect gave me a freedom to present her words in a way which would not be so strictly tied to one interpretation of the text. I then asked the obvious question: what does a factory sound like? Her eyes grew wide, and she said that it varies immensely depending on what it was the factory produced. Then she began to recall… disorderly crashes… electronics humming… drones…

She thought for another moment, and asked if I would like to go.

Later that day, we arrived in Dongguan, a city an hour and a half outside of Guangzhou. We first went to their library and museum, where we met two of Zheng Xiaoqiong’s close friends. One, Sai Ren (塞壬), was a novelist and the librarian in Dongguan; the other, Zhan You Bing (占有兵), was a photographer and documentarian who had been studying Chinese factories for the past decade. We first sipped tea and looked over his books before entering the section of the museum used as storage for his collection. There were clothes, tickets, rolls of film, work schedules, and books and books of photos with covers hand-sewn from denim jeans.

At dinner we were joined by a poet based in Shenzhen, Xue Fang (雪芳). She explained to me one-on-one that what set Zheng Xiaoqiong’s poetry apart was not its subject matter (“actually, there are many migrant worker poets… ”), but her use of language and her unstoppable vision. “Of all the workers in Chinese factories, how many are able to leave? And then to create artistic work of that depth…”.

We visited five factories… It was a sonically overwhelming experience, accompanied by an emptiness.

We visited five factories as a group the next day: a hardware factory, an electronics factory, a factory which produces the plastic wrapping material for children’s toys, a chemical factory, and a shoe factory. It was a sonically overwhelming experience, accompanied by an emptiness. I remembered a hollow feeling I had encountered once before when I exited the subway in Beijing at the wrong station, walking out into a wasteland of construction sites. At one point we sat drinking tea and eating cherries with a factory boss (lao ban 老板) while he watched CCTV displays of the workers in the sweatshop behind him sorting plastic in the dark.

A worker sorting through silicon molds at an electronics factory in Dongguan, China. Photo by the author.

Zheng Xiaoqiong is no longer a migrant worker, but she is connected to a community of writers who share those experiences, as well as a larger community of writers and editors across China and a community of poets and translators abroad. Her poems are sourced in the lives of real people, but not in some tangential way: she returns on the weekends to talk to the workers and then amplifies their experiences through her writing. This connection is the lifeblood of her work. 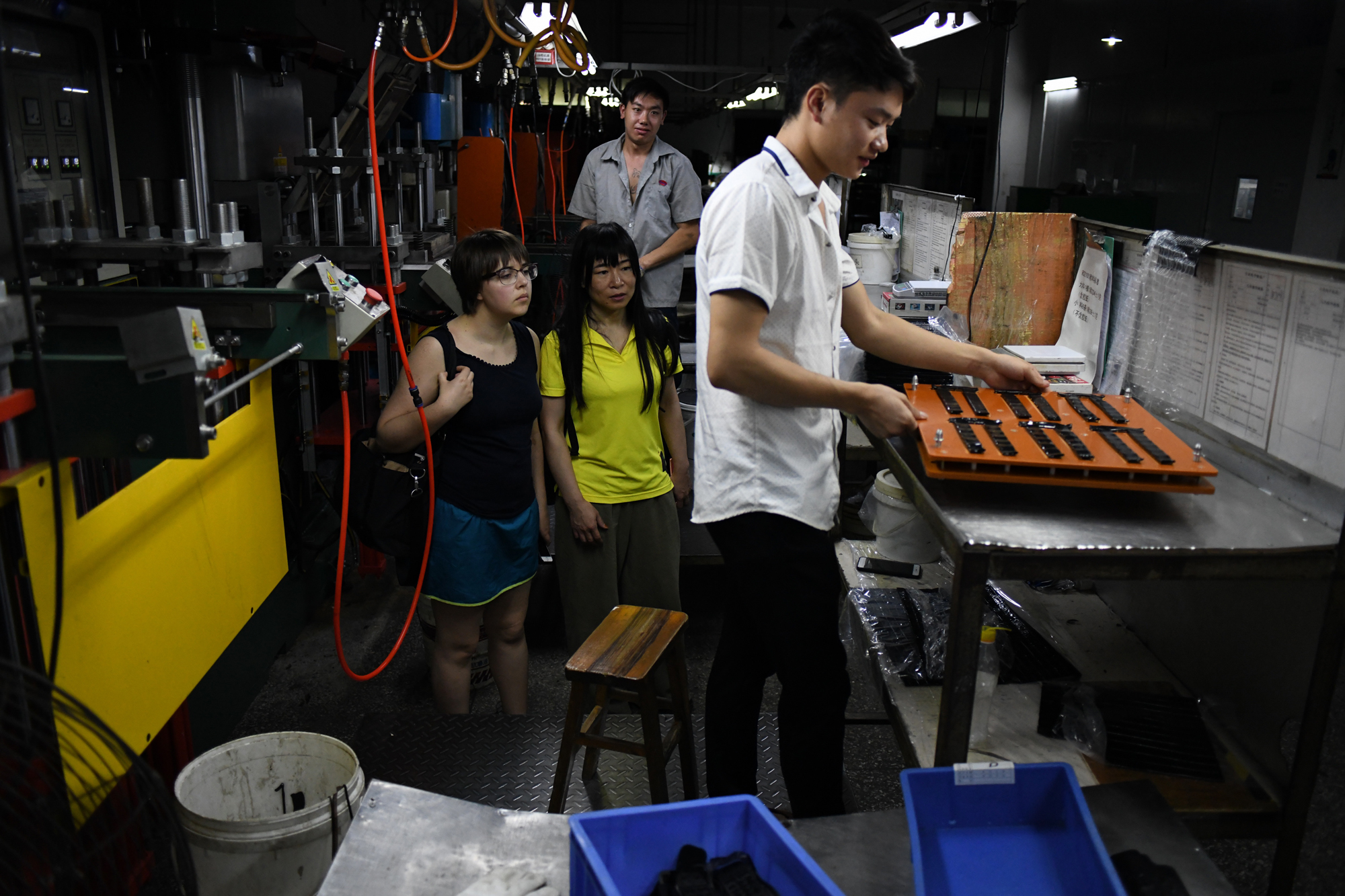 Zheng Xiaoqiong and the author in an electronics factory in Dongguan, China.
Photo by Zhan You Bing 占有兵.

Community is created through exchange. Zheng Xiaoqiong finds this not only at her publication, but in her friends who accompanied us to the factories. She explained that while they only have the chance to meet in person a few times a year, they stay in touch through phone calls and WeChat, encouraging one another in their writing pursuits. The conversations I shared with everyone in the group that weekend were passionate and covered both the situations of factory workers and the shared challenges we face as writers of words and of music.

Community is created through exchange.

My weekend with Zheng Xiaoqiong informed my understanding of her work, and built a connection between us past words on a page into friendship. Exchange with China is not simply reading a poem from the Tang Dynasty and setting it. Rather, it is based in personal connections and requires a coming to terms with the complexities of modern life in China today. 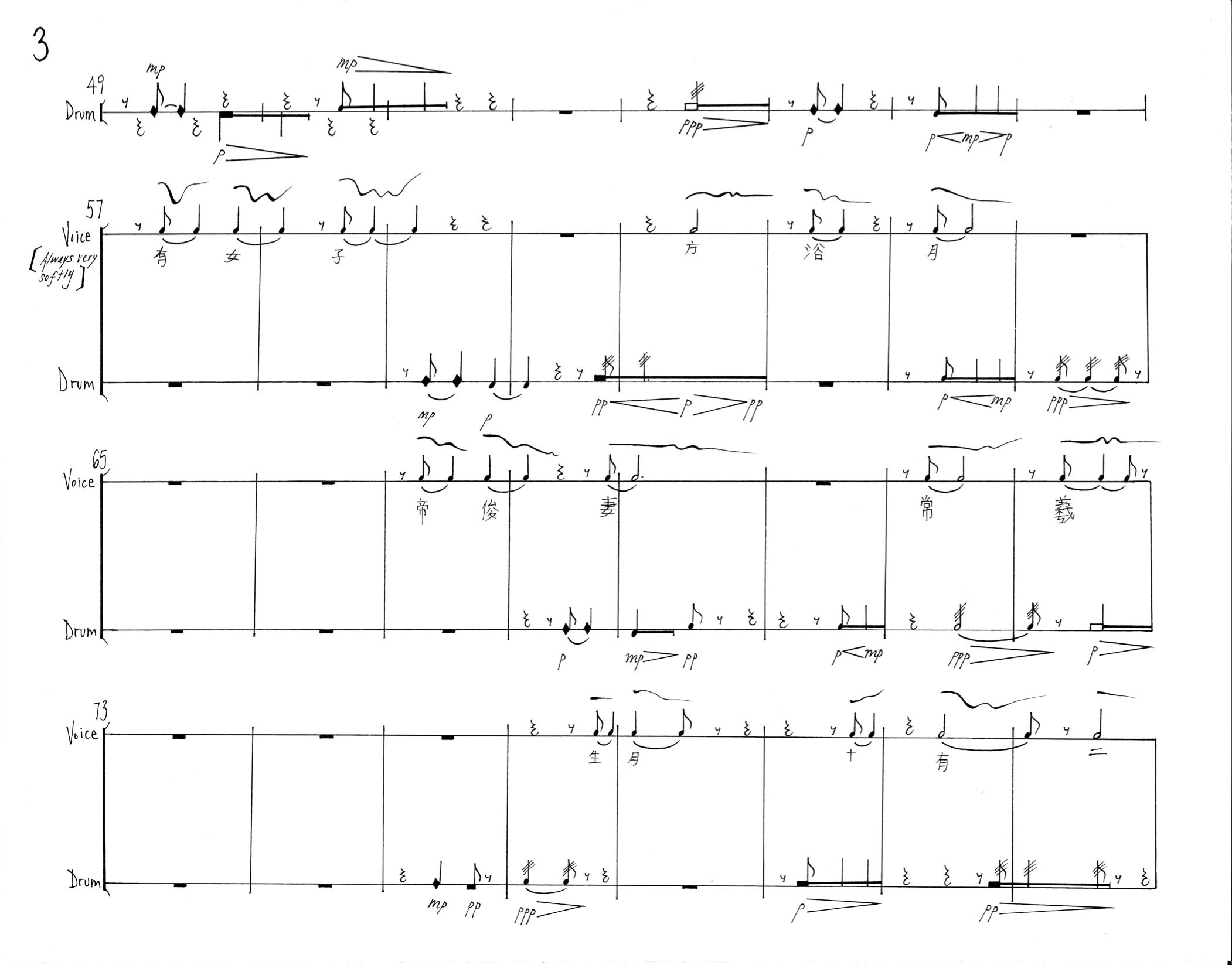 An excerpt of 辜月 Gu Yue (2017), another work from the same set of voice and percussion works containing Zheng Xiaoqiong’s poem. Composed by the author for percussionist Yongyun Zhang 张永韵.