RighteousGIRLS at the Bruno Walter Auditorium at Lincoln Center

Posted on March 7, 2017 by RighteousGIRLS

RighteousGIRLS will be closing out this season for ChamberMusicNY on Saturday, April 29th, 8PM with their debut at the Bruno Walter Auditorium at the New York Public Library of Performing Arts at Lincoln Center. This event is FREE and open to the public.

We hope to see you there!
-RG

RighteousGIRLS are performing at Spectrum in New York City on Saturday, April 2nd, 9PM (free wine!) alongside guest artist Kenneth Salters on drums. We will feature a number of newly commissioned works, alongside originals – blending elements of avant-garde, improvisation, and electronics. This concert is part of the ‘Born into Flames’ series hosted by composer/guitarist John King. We hope you can join us!

Posted on November 16, 2015 by RighteousGIRLS

RighteousGIRLS are happy to announce that ‘gathering blue’ received 4.5 stars in the November issue of Downbeat Magazine! We included the review below, along with selected reviews, interviews, and broadcasts from the past couple of months. We couldn’t be more honored to have such incredible support from our community.

RighteousGIRLS are currently in the process of developing our sophomore album – look out! Exciting things are on the horizon for us – more soon! -Gina & Erika

Posted on September 18, 2015 by RighteousGIRLS

A wonderful review by I Care If You Listen – Jackson Cooper

“One of the most adventurous new music debut albums to date”

A special thank you to everyone who made it out to RighteousGIRLS CD release of ‘gathering blue’ at Joe’s Pub with Andy Akiho (steel-pan) & Kendrick Scott (drums). We couldn’t had asked or a better audience.

To celebrate the release of gathering blue, RighteousGIRLS will be joined by steel-pannist Andy Akiho and drummer Kendrick Scott on stage at Joe’s Pub in NYC on Friday, August 7 (doors at 6 pm, show at 7 pm).

Reserve Your Seats Today: $15 in advance and $20 at door, available at publictheater.org

We look forward to sharing our music with you!

Posted on June 4, 2015 by RighteousGIRLS 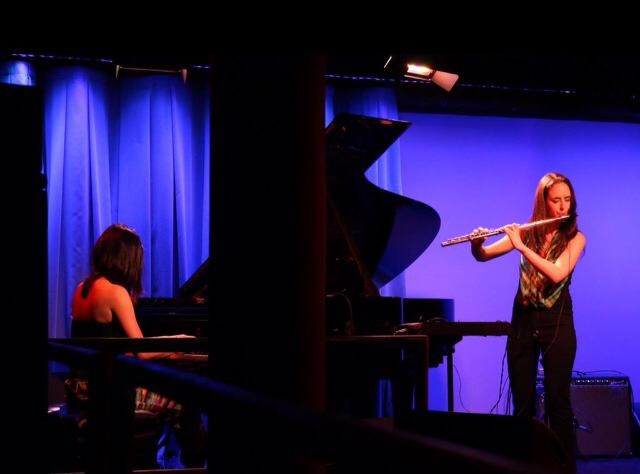 This past week RighteousGIRLS had the wonderful opportunity to perform as part of the New Music USA Event at SubCulture in New York City. The performance highlighted two works from ‘gathering blue’ including Andy Akiho’s ‘KARakurENAI’ and a world premiere of Pascal Le Boeuf’s ‘GIRLS,’ which is the opening track on the album.

RightousGIRLS will be announcing the album release date and our CD release event shortly, so stay tuned!

As RighteousGIRLS, NY-based flutist Gina Izzo and pianist Erika Dohi continually expand their vocabulary through ongoing commissioning projects and collaborations, inviting some of today’s most prominent composers and artists to create genre-blurring new music. Their debut album “gathering blue” features nine contemporary classical and jazz artists; aiming to expose new audiences to 21st century music, as well as commission, premiere, and record works that root themselves in classical, but pull from other genres.

The album features new works and commissions by:

For the RighteouGIRLS, “gathering blue,” (inspired by the 2000 science fiction novel by Lois Lowry) is a sweep of personal discovery, a metaphor about gathering colors and weaving them together to create the story of their surrounding community. Since their formation in 2010, RighteousGIRLS have continually explored the artistic community of New York City, and on this album, share their experience. “gathering blue” brings together a collection of composers and performers in duo/trio settings (drums, steel-pan, trumpet, and bandoneon) while integrating improvisation and post-production techniques. The subject matter (odd time signatures, improvisation, and nonconventional forms) is woven together by a series of interludes, illustrating the evolution of the RighteousGIRLS sound and the colors they’ve collected. Over the past year, RighteousGIRLS have worked with each artist and composer featured on the album to help shape each work, turning these ten newly composed pieces into their own unique story.

As part of the album, RighteousGIRLS will include a music video of the opening track “GIRLS” by jazz pianist/composer Pascal Le Boeuf. The commissioned track will be recorded by videographer Michael McQuilken using a wide range of contemporary video techniques and multi-camera angles. The “experimental film” will display the many theatrical elements written into the score by Le Boeuf including: the use of palms, elbows, and forearms on the piano keys; strumming and plucking inside the piano; and various extended techniques for flute and piano. It is neccessary to provide a visual aid to allow the audience to fully experience both the composition and the asthetic of the album as a whole.  This video will give the uninitiated listener a context for the various unconventional acoustic sounds used throughout the album, thus changing the way the RighteousGIRLS’ performance is experienced.

“gathering blue” was recorded at Brooklyn Recording (engineer Andy Taub) and at Oktaven Audio (engineer Ryan Streber). The album is set to be released in 2015 on iTunes, Amazon, and CDBaby, and will be followed by CD release events in NYC and Japan. Once released, RighteousGIRLS will ask each collaborating composer to include their recorded track on their New Music USA profile.

This debut album acts as an introduction to the ensemble, displaying not only the RighteousGIRLS as instrumentalists, but the rush experienced when they are given the freedom to unleash their own discoveries while “gathering blue.”

“GIRLS” (featuring RighteousGIRLS Gina Izzo, flute and Erika Dohi, piano )was recorded at Oktaven Audio with engineer Ryan Streber on June 9, 2014. This track is a rough mix (unmixed/mastered) and will be included on the debut album “Gathering Blue.”

“GIRLS” includes many theatrical elements written into the score by Le Boeuf including: use of palms, elbows, & forearms on the piano keys; strumming & plucking inside the piano; multi-track layering; & various extended techniques for flute & piano.

As RighteousGIRLS, New York-based flutist Gina Izzo and pianist Erika Dohi continually expand their creative reach by bringing 21st century music to new audiences and commissioning works that root themselves in classical idioms, but draw from other genres. On July 10, 2015, RighteousGIRLS made their introduction with the release of their debut album ‘gathering blue’ (New Focus Recordings) featuring thirteen new works by contemporary/classical…