Samuel Barber died 30 years ago; 2010 also saw the 100th anniversary of his birth—an occasion marked by many concerts, recordings, and new publications. One of the publications is an update to the previous volume of his Complete Piano Music. Barber published five piano compositions during his lifetime (Excursions, Piano Sonata, Souvenirs, Nocturne, and Ballade). This new anthology supplements these with over 25 additional works. All (but one) are youthful, ranging from a piece written at age seven to the Interludes I and II of 1932 (for comparison, the Adagio for Strings is from 1938). Though the Brahmsian Interludes are still juvenilia, they display hallmarks of Barber’s own musical personality and are hardly an embarrassment in public performance. I cannot say the same about Fantasie for Two Pianos Written in the Style of Josef Haydn of 1924. My jaw dropped, however, when I saw the inclusion of over 30 pages of “Student Counterpoint Exercises,” written while Barber was studying with Rosario Scalero at the Curtis Institute. I’m sure that I am not the only composer who recoils in abject horror at the mere thought of somebody publishing my college counterpoint assignments.

I attempt to hold a straightforward personal position on the subject of juvenilia publication—only works that a composer explicitly wanted published should be published. Obviously, the reality is rarely that simple. In some cases, though, it should be. Barber had over 50 years during which to consider whether he wanted those early pieces published. He did not choose to do so, and I believe strongly that those wishes need to be respected. Furthermore, some common sense should be applied when looking at a composer’s works. While one could argue that some of the early works of Benjamin Britten that have been released deserve to be published, I believe it is unquestionable that the works of a pre-teen composer or school counterpoint exercises should not be put into print.

Of course there are times when a composer, for various reasons, chooses himself to publish juvenilia. Aaron Copland, as encroaching dementia began to curb his ability to compose new works, started releasing a number of previously unpublished works from the early years of his career. While some of these works (particularly the small piano pieces drawn from his early film scores) are of the high caliber of craftsmanship and inspiration that Copland maintained throughout his career, some are not, such as the rather insipid Four Motets (1921) that he wrote while a student of Nadia Boulanger. Unfortunately, having these remarkably uninspired compositions out there means that choral conductors see them, see Copland’s name, and actively program them despite their obvious weaknesses. I personally heard one very well-known choral conductor say, “Well, sure they’re not good—but they’re by Copland!” Yet the decision to publish was Copland’s, so it cannot be said that his wishes were not respected. (However, as his health failed, Copland was surrounded/guarded by assistants who provided the encouragement and impetus for many of these publications.)

For the publishers of Barber and Copland (G. Schirmer and Boosey & Hawkes respectively), I suspect that the urge to capitalize financially on some of the most valuable composers in their catalog is probably irresistible. In this age where the serious concert music business continues to seem increasingly marginalized, one is hard-pressed to criticize the decisions of any publisher who is able to actually stay in business. Yet having immature works by these major composers formally published almost certainly means those works will enter the repertoire, and this does a tremendous disservice to the composers and their reputations.

When the subject of juvenilia and sketches arise, the oft-cited example is Brahms, who destroyed his sketch material and uncompleted pieces, leaving behind a catalog of works of a remarkably high level of quality and consistency. Other composers present more of a gray area. Edward Elgar stated on his deathbed that nobody was to “tinker” with the sketches for the unfinished third symphony he knew he would not complete. His estate had respected those wishes for years, but realized in the early 1990s that the copyright was soon to expire, and that those sketches would thus become public domain. In order to prevent any and all from tinkering, the estate commissioned composer Anthony Payne to prepare an official completion (which Payne more accurately termed an “elaboration”). Payne’s excellent work has gone on to be immensely successful (with myriad performances and several commercial recordings), and it is a compelling musical work. Of course, the intent of Elgar’s actual wishes could have been better respected if his heirs had immediately destroyed the symphony sketches. Although if that had actually happened, we would not have the very fine elaboration that Payne created.

What is the lesson for composers today that can be taken from these stories? Obviously, the odds are slim indeed that any one of us will end up with the reputation of a Barber or a Copland, let alone a Brahms! Furthermore, with so many composers writing scores entirely with computer, what are the chances that 30 years after the death of Composer X, one would even be able to find her original Sibelius 6 or Finale 2011 files for never-released pieces, let alone actually locate computers/software capable of reading them?

Yet, what’s the harm in playing it safe? Obviously many of us like to keep our juvenilia and sketches around to consult (or sometimes resuscitate) for a future piece. I would suggest leaving instructions for a trusted relative to destroy all non-published materials immediately upon death. Likewise, specific instructions should be made in one’s will for the musical executor (and publisher) not to publish any works previously unreleased. Destruction, however, is the only way to ensure that the pieces do not get out. Musicologists will say (rightly) that destroying sketches and juvenilia makes it far harder for future research. If in fact one could trust that the use of these materials would be confined exclusively to analysis and biography, that would be fine. But, in my opinion, destroying juvenilia is substantially better than running even a slim chance that someday a character piece written at age seven might show up alongside a mature sonata in a “complete” volume. Definitely go burn any student harmony exercises right now! There’s no good reason to keep those hanging around anyway.

American composer Carson Cooman has written a large number of works in nearly all musical forms, and thirteen complete CDs devoted to his music have been released on the Naxos, Albany, Artek, Altarus, MSR Classics, and Zimbel labels. In addition to his work as a composer, Cooman serves as an active consultant on music business matters, particularly those relating to composer estates, posthumous publications, and archives. 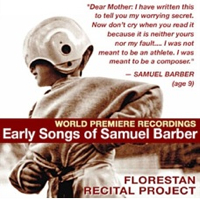