Among the rolling treetops and mountains of western Massachusetts, the large dome of Sweeney Concert Hall stands proudly atop monstrous Grecian columns. The building itself, Sage Hall, houses the Smith College Department of Music. Its four floors boast numerous practice rooms, grand pianos, and a state-of-the-art Digital Music Room. Newspaper articles detailing the accomplishments of alumnae are prominently displayed on various bulletin boards in the hallways. In the basement, where the college ensembles are based, a tattered article from 2001 is pinned to the wall: “Smith Orchestra Makes Carnegie Hall Debut.”

The landscape of Sage Hall suggests a thriving community of student musicians. Statistically, however, this is not the case. In recent years, the musical ensembles of Smith College have seen a significant decline in membership. The same orchestra that played at one of the nation’s leading performing arts venues almost 20 years ago now only has about 30 members. Despite dedicated retention and recruitment efforts by students and faculty alike, youth simply do not seem as interested in playing in a classical ensemble as they once were. This problem is not exclusive to Smith: at a recent conference, I heard testimonies from representatives of various liberal arts colleges reporting similar struggles with dwindling participation in their departments of music.

By investing in collegiate music programs, we invest in a future community of diverse new artists.

Issues of enrollment in collegiate music programs have a direct, albeit delayed, effect on the new music community. New musicians, composers, and educators enhance the vitality of their local music ecosystems by introducing fresh perspectives and partnerships. Most importantly, recent graduates—especially those from diverse backgrounds—can inspire young musicians to pursue their own artistic aspirations. By investing in collegiate music programs, we invest in a future community of diverse new artists. As a student musician and leader in my own collegiate orchestra, I hope to cultivate robust music ecosystems by illuminating potential barriers for continuing music education and proposing cost-effective methods for ensemble retention and recruitment.

Socioeconomic status is a major predictor of whether many students pursue higher education. Low-income students typically have to take on one or more paying jobs on top of their regular course load: time that their higher-income peers may spend pursuing valuable professional development opportunities. While wealthy students are more likely to enjoy college and find employment on the other side, low-income students struggle to make ends meet, often sacrificing the pursuit of their dreams in the process. This vicious cycle is painfully evident in music due to the massive cost of instrument purchase, repair, and rental. While many K-12 schools own instruments which are available for student use, colleges like Smith typically do not. Thus, orchestral instrumentalists often find themselves empty-handed after their high school graduations, forcing them to give up their musical studies. Even if students owns their own instruments, the cost of private lessons is another barrier. With tuition rising annually, many college students are intimidated by the prospect of an extra fee and drop their musical participation altogether.

— Advertise a “used instrument drive” to alumni and community members so incoming students can continue their instrumental studies.
— Invest in owning cost-effective instruments like the plastic pBone line.
— If one does not already exist at your institution, establish a “beginner’s orchestra” with starting musicians and these acquired instruments. By playing in this ensemble, students have the opportunity to develop musically and eventually join the college’s higher-level groups, enhancing the vitality of the music program.

While dead white composers have certainly made large contributions to music history, their narratives almost always take precedence over women and people of color in classrooms and concert halls. The institutional focus on dead white composers is not only problematic because of its lack of accessibility to students: it also “heroifies” some composers like Wagner who have come to represent racist and anti-semitic ideologies. Considering the most recent surge in student activism relating to tolerance and diversity, it is unsurprising that college students shy away from classical ensembles with long histories of Eurocentrism. Furthermore, collegiate orchestras are primarily composed of white musicians, standing at odds with the increasingly diverse makeup of a global campus. Students are far less likely to get involved with an ensemble that does not directly reflect or serve their community.

— Program works by women and people of color which are accessible to the overall level of the group.
— Supplement traditional works from the classical canon with detailed historical contexts that consider multiple cultural perspectives.
— Perform a public benefit concert or other service project at least once a semester. Playing outside the confines of the music building will draw in new audiences to revitalize the group. Today’s students will also be more attracted to an orchestra which upholds values of social justice by serving its community.

In her book Doing School, Denise Clark Pope chronicles the lives of five high school students to illuminate how “we are creating a generation of stressed out, materialistic, and miseducated students.” By placing more value on core academics and GPA than on vocational skills or character building, students are put under the impression that “people don’t go to school to learn; they go to get good grades which brings them to college, which brings them the high-paying job, which brings them to happiness, so they think.” Thus, the “best and brightest” high school students sacrifice sleep for grades, passions for resume-building, and friendships for academic competition. When all of these like-minded people come together at a college like Smith, the “Stress Olympics” begin. Students are often driven to give up their passions for music because of the high standards upheld by their professors, peers, and selves. Many are simply unable to practice their instrument on top of a full course load. Others are intimidated by the ability levels of their sectionmates and leave the group. Either way, exit surveys completed by departing orchestra members are beginning to sound like a broken record: “I just don’t have the time.”

— Create avenues for peer mentorship. Higher-level musicians may teach informal lessons or run sectionals. This would present constructive challenges for students of all ability levels.
— Combat stress culture internally. Student leaders may program “stress-free” social activities outside rehearsals to encourage self-care among orchestra members.
— Always ask, “why are we doing this?” In a culture of immense academic stress, it is easy to forget why one would take the time to play an instrument instead of study. I recommend the integration of a program like StoryCorps into the musical curriculum. The art of storytelling allows students to remember why they started playing music in the first place, ultimately reigniting their love for the art. Story-focused programming may be used to recruit incoming first-years to college ensembles, as well as to advocate for music education at local, state, and even federal levels.

Cas Martin is a rising senior at Smith College. An avid trombonist, educator, and activist, Cas focuses his work on making music accessible to young people in all communities. He is currently the Ensembles Manager at the Smith College Department of Music and a Public Policy Intern at the National Association for Music Education (NAfME). 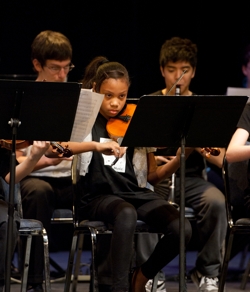