The idea for playing some joint recitals with Terry Riley was conceived in January 2017 when I met up with him at one of his solo concerts at Los Angeles’ Geffen Contemporary gallery. His twin grandchildren, Simone and Misha, were with him, and I was delighted to meet them. Until that day I had only known of them as the newborns who inspired the eponymous first and final movements of The Heaven Ladder, Book VII, Terry’s 35-minute pianistic tour-de-force completed in 1994. It was a piece that had been commissioned through a Meet the Composer/Reader’s Digest Commissioning Grant by four pianists from around the country: Kathleen Supové, Stephen Drury, Charles Wells, and me. Kathleen had scheduled a June 1995 world premiere of the piece in NYC, and I gave its West coast premiere in October and recorded it for Telarc shortly afterwards.

“You mostly play written music and I almost always improvise.”

During our brief conversation at the Geffen, Terry and I agreed that it had been far too many years since I had performed the suite in full—and why not plan do so the following season in a concert that we’d play together? I would be the “opening act,” playing Terry’s Two Piano Pieces (1958/1959), The Walrus in Memoriam (1991, rev. 1993, written for Aki Takahashi’s Beatles project on EMI Records and based on “I Am the Walrus”), and the complete Heaven Ladder, Book 7. Terry would then take the stage with two semi-improvised pieces, Requiem for Wally (1997) and Simply M (2007). For our first such performance in March 2018, on the Los Angeles-based Piano Spheres series, Terry completed a 4-hands finale in the form of Cheng Tiger Growl Roar.  In an email as he was working on it, he wrote, “It will be a challenge as you mostly play written music and I almost always improvise, but I am sure it will be great and hopefully fun for both of us.”

In his youth Terry pursued training as a classical pianist; the renowned Bay Area-based Adolph Baller was one of his teachers. (As a student at Stanford some years later, I also studied with Baller.)  An online recording from Terry’s U.C. Berkeley Master’s degree performance of his Two Piano Pieces (1958/1959) reveals that he was already a stunning virtuoso destined to perform and compose extensively for the piano. Yet 35 years would pass before he composed his next fully notated piano piece, The Heaven Ladder, Book VII.

In terms of the stylistic and technical requirements for the pianist, the piece poses formidable challenges. The five movements are highly contrasting in style. “Misha’s Bear Dance” is a polymetric romp with “Russian” overtones. “Venus in ’94” is, in Terry’s words, “a waltz-scherzo with a somewhat edgy quality to its romanticism. Its beauty comes with a price-tap of quite a hazardous course, requiring the pianist to execute wide but delicate leaps through its intricate voicings and rhythms.” “Ragtempus Fugatis,” as its title implies, is a ragtime fugue that is labyrinthine and good-natured. “Fandango on the Heaven Ladder,” is a sensual Spanish-flavored fantasy. And finally, “Simone’s Lullaby,” is a tender love letter to Terry’s newborn grand-daughter.

The original score pages of The Heaven Ladder, Book 7, contained minimal performance indications or expressive markings. Terry has always been an awe-inspiring improviser who spins gorgeous, elaborate narratives out of the sparsest, if any, of printed instructions. I am not. I’m an interpreter—my imagination gets aroused by being the actor, not the playwright. Nonetheless, Terry’s directive on the title page of The Heaven Ladder, “Dynamics and phrasing should be worked out by the performer or in collaboration with the composer,” proved to be a daunting task.

Over the course of several months and with frequent changes of mind, I scribbled instructions to myself in Terry’s unadorned urtext, eventually making my own personal “edition” of the piece. It wasn’t only the dynamics and phrasing that required coordinated calibrating. Terry had left open any number of questions both big and small about pedaling, articulation, touch, pacing, tone color, movement order, and the essential nature and shape of his expressive forms. Balancing all of those elements in support of his massive 5-movement architectural design took a lot of experimentation. I made different choices almost daily during my practicing, and arrived at multiple versions that I believed to be equally viable. Finally, a few weeks before my October west coast premiere I committed to a basic interpretation and drove north to the Gold Rush town of Camptonville, the home of Terry and Ann Riley, to consult at the piano with Terry.

I recall Terry’s directions to his home as being as unembellished as a jazz chart.

Though Camptonville is a ten-hour drive from Los Angeles, I recall Terry’s directions to his home as being as unembellished as a jazz chart: “Just make a left off of Highway 49 onto Moonshine Road.” I stopped in San Francisco overnight and found the house the next day with no small amount of effort (remember that this was the pre-cellphone, Thomas Brothers Guide era). The street sign for Moonshine Road was non-existent. “Oh, people just love that sign so much,” said Ann upon my distracted arrival, “It gets stolen all the time.”

In 1994 Terry’s airy studio housed a 9-ft Yamaha Midi Grand, an array of microphones and synthesizers, an early Atari computer, and an assortment of instruments from India, the Middle East, and China. We sat down at the piano, but I didn’t get very far in playing the piece for Terry. Almost from the start, in phrase after phrase, we found ourselves to be in profound disagreement. Where I aimed for lyricism, he heard preciousness; where he asked for less rubato and more drive, I felt the results to be unmusical and square; where he felt many of my choices to be overly sentimental, I secretly believed that his requests rendered the music inexpressive. In the end, I channeled as much of Terry’s approach as my temperament and technique allowed for. The results of our interpretive wranglings of long ago found their way eventually into the first edition of the piece (offered until recently on Terry’s website), more comprehensively on the Telarc CD that I recorded 23 years ago, and in the beautiful Chester Music edition issued in 2015.

When I revisit my recording, I hear things that I would, and indeed do, play very differently now. I relearned the pieces from the 2015 published edition, and seeing our hard-won musical choices of 1994 “authenticated” there, I give myself occasional permission to disobey them. I didn’t consult my old recording until very close to the performance date. When I mentioned to Terry just before our concert that I would play the pieces very differently from the way I did on the recording, Terry responded “Oh, but I really love the way you played it on the recording.” 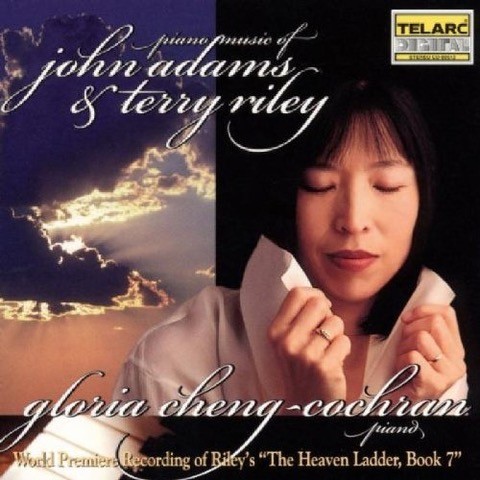 Performance decisions are never set in stone. With the passage of time, interpretations evolve. Not only can I now fully embrace the conception that Terry shared that day in his studio, but I’m also older and hopefully better at integrating his disposition with my own. One of the joys of preparing repertoire after a long hiatus is rediscovering it from a new perspective and finding new treasures in it. In this case, another pleasure has been the opportunity to compare notes (sometimes literally) and musical decisions with my friend Sarah Cahill, whose long and fruitful association with Terry is well known. Terry’s piano works, and the pianists who play it, as yet lack a long and varied interpretive tradition to draw upon. We are bonding with each other to create it.

When playing the music of composer-pianists, it’s possible to sense the anatomy of their hands, their innate physical approach to the keyboard, their idiosyncratic touch, even their comportment at the instrument. All of this finds its way into the shapes of their chords, passagework, and other characteristics, making the piano music of composer-pianists behave—and most assuredly feel, to other pianists—like a pianist wrote it. Terry’s music feels physically challenging under my fingers, but it is serious fun to channel his persona at the keyboard.

For me, playing works by composer-pianists also invites an excursion into their personal piano-playing histories. Terry’s primary relationship with the piano is that of an improviser—an extraordinary one. Expressing a lifetime of knowledge and experience from his studies of classical, jazz, contemporary, North African, and Indian classical music, his playing is widely known to defy stylistic boundaries. “A lot of intersections between these musics occur in my mind. As I’m writing or playing something like a raga, suddenly a kind of ragtime motive might come into it.” His composed music for piano, much of which emerges from his improvisations, does much the same thing, often switching multiple times within the same piece or movement. With his own virtuosic command of the piano at the service of his global, kaleidoscopic, consciousness-expanding imagination, I’m sure that he would welcome the idea of future classical pianists like me approaching his notated music with free flights of inventiveness rather than a conscientious fidelity to a decades-old conception of the score. Pianists of the future: take note! 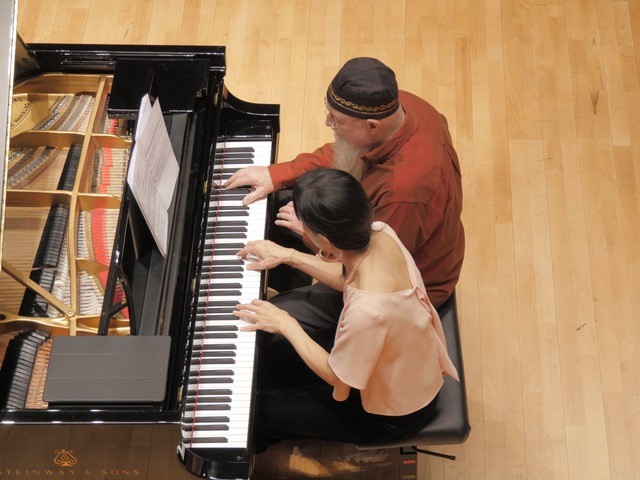 [Ed. note: Gloria Cheng will perform with Terry Riley and the Other Minds Festival in San Francisco on December 5, 2018 and again at California State University at Chico on March 6, 2019.]