This is a weird year to drop a debut record. We live in Portland, Oregon, a city that has seen more than its share of upheaval lately. In January, after three years of composing and recording, we’d found great label support, honed our live set, ordered vinyl, and booked tours. Then, our record announcement fell on the same day the World Health Organization declared COVID-19 a global pandemic. Two months later, the record was released just days before George Floyd’s murder. We wept for the world as we went through the motions working on promo and music videos, and the world showed us growing fascism, worst-ever wildfires, and forced sterilizations of the most vulnerable people. Every week of 2020 has shown us something far more important, far more worthy of attention than a record of new music by two white men.

We’ve had the rare fortune of being able to put our most precious energies into our art for decades. We’re lifers. We always thought this in itself was a radical practice: fighting for a life outside of the accumulation of capital, spending our efforts building a community for the arts, and trying to share with our friends and audiences a sense of hope, joy, and inspiration, or offering a new definition of beauty that’s lightyears away from the Gucci-Kardashian-Bugatti-sphere.

But it’s not enough. The same hard questions we asked ourselves after the 2016 election have come roaring back with renewed relevance and force. Are we doing any good? Why should niche art music based on microtones and polyrhythms be important? Should we be taking up any space at all?

Why should niche art music based on microtones and polyrhythms be important? Should we be taking up any space at all?

This year, Portland has been locked down with protest curfews and insane wildfire smoke. One of our housemates was injured by illegally deployed police impact munitions. We had friends of Color buying bulletproof armor or not leaving their homes out of fear of attacks by Proud Boys. And these immediate threats piled on top of our perennial concern: will the American West, and, really, much of the world, continue to be habitable under this kind of worsening climate damage?

We’re learning a lot from our partners and friends. We have it pretty good and so we have a responsibility to re-educate ourselves around justice, mutual aid, and proper communication. We’re supporting our friends in the streets, we’re giving money to liberatory causes, trying to center others’ voices. And, of course, we’re heartbroken. We’ve lost our own lifeblood. We’re not doing the thing we love and have built our lives around: we’re not performing. 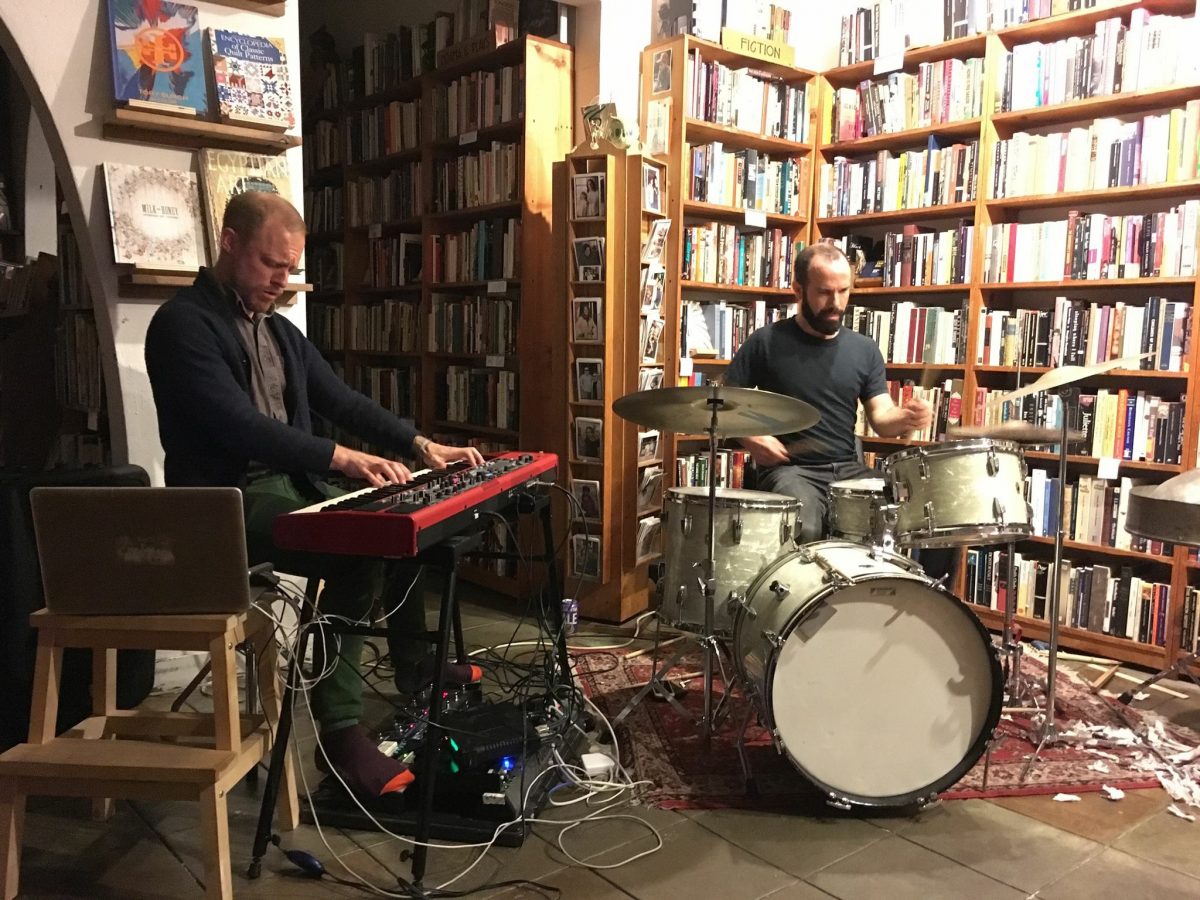 Methods Body performing in a bookstore (Photo by Jacob Heule)

Our entire “industry” has essentially disappeared. The downtown venue where we first met and played together in 2007 announced it will not reopen. The same goes for our favorite DIY neighborhood spot that has been hosting challenging music for years. How many brilliant ensembles will fold? How many artists are giving up on their dreams this very moment?

Our entire “industry” has essentially disappeared.

The impetus to get to work on our next record is still here, if muddied. We’re both noticing that our expectations for our music have changed drastically. The music we were making even eight months ago feels suspect. Something different is required now. We’ve had the privilege of being together, taking refuge in our instruments, playing and chasing our weaknesses. Trying to remember the uncomplicated joy of just spending time at an instrument. Fighting to feel like it can matter. We find solace in hearing from other musicians who are forging ahead with hope: Ed Rodriguez, Amirtha Kidambi, Holland Andrews, Chris Williams, and many others.

After the last inauguration, John did some speculative fiction about a future in which we might need to assemble resistance cells to oppose fascism. The music in Claimed Events Pt. 2, Overheard is built upon a bit of that writing:

My friends, however, claimed events would identify them, but to
overhear and accept only one month to prepare us in a very
small room with rubble in one corner

John plays the rhythm and melody of this phrase in a drum ostinato that is eventually taken up by the vocals of Holland Andrews. Luke and Holland improvise over this structure.

One of our collaborators, UVA art professor Lydia Moyer, shot some tests for a dance-theater project inspired by images of Civil War battle smoke. Moyer sent us some complex, smoke-choked imagery and the resonances with our present reality were breathtaking—civil war seems, again, a distinct and terrifying possibility; the US has deployed more toxic gas against its own citizens during a respiratory pandemic than in all the years since Vietnam; COVID is out of control. When Moyer and Leeri synched their imagery to a track on our debut, Claimed Events Pt. 2, Overheard, the result was harrowing and beautiful.

launch gallery
Art will adapt and go on in new and unpredictable ways.

Of course, art will adapt and go on in new and unpredictable ways. Poets and musicians here have been supporting the Black Lives Matter protests by performing in the streets. The Fixin’ To, a local venue that’s been shuttered for months, is experimenting with limited capacity patio shows, so we gave an outdoor performance for a few physically distanced (and chilly!) friends this month. We’re starting work on our next record. And we will rise up with others to ensure the voice of the compassionate majority is heard. 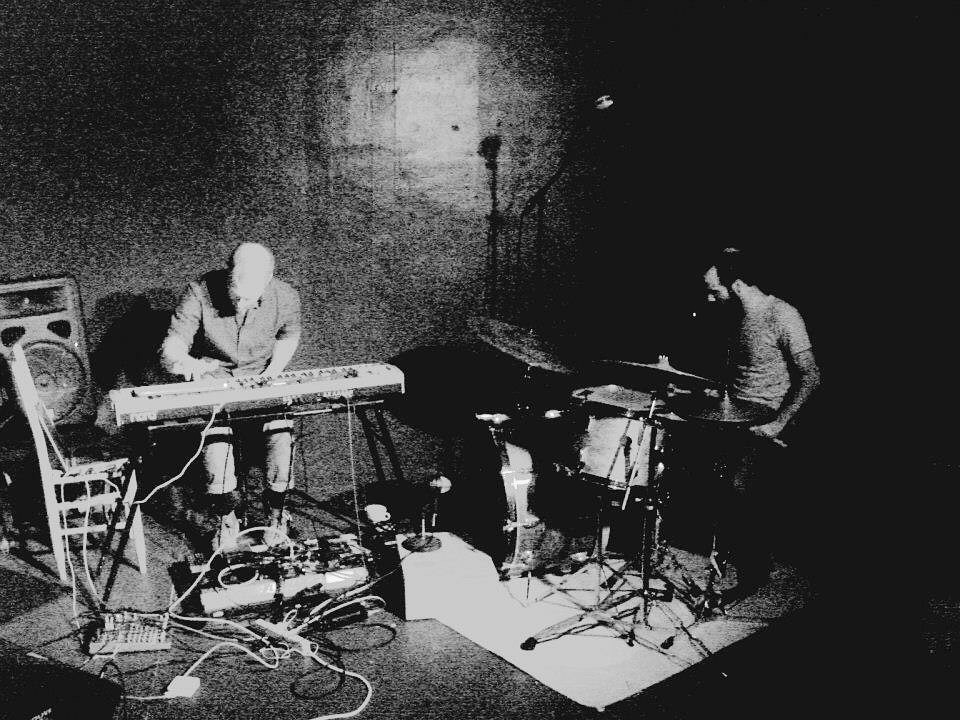 John Niekrasz is a drummer, composer, teacher, and writer from Chicago, living in Portland. He received his MFA in poetry from the Iowa Writers’ Workshop in 2004. His band with Luke Wyland, Methods Body, releases its debut record on New Amsterdam Records and Beacon Sound on May 22, 2020. John also performs and composes for ensembles including Orchestra Becomes Radicalized, Why I Must Be Careful, Y La Bamba, Glowing Life, Thicket, GRS, Poor School, and Guvna Rakety.

Luke Wyland is an American interdisciplinary artist, composer, performer, and arts organizer who achieved international success as the multi-instrumentalist, singer and founder of the art-pop band AU (2005-2013). He has toured extensively throughout North America and Europe and has released records on New Amsterdam Records, Beacon Sound, The Leaf Label, Aagoo, Hometapes, Crammed Discs, Inpartmaint, and Pop Frenzy, amongst others. His current project, Methods Body, is a collaboration with virtuosic drummer John Niekrasz. Their debut album is out now on New Amsterdam Records and Beacon Sound. Purchase here: methodsbody.bandcamp.com