Jim Hall has left behind some of history’s finest art, and is to be loved deeply. His memory will bring joy, not sorrow, for what he’s left us shall always mark greatness, as well as a precious map for many others to follow. Bravo Jim Hall!

In 1995, three of my students were graduating from LaGuardia High School in New York City. LaGuardia is one of the finest schools in the country for high school students who want to study the arts. Many of the graduates have gone on to become professional musicians, actors, dancers, and visual artists. As a graduation gift for these talented young players, I decided to take them to the Village Vanguard to hear and meet Jim Hall. Why would I do that? I knew Jim would be very receptive to meeting them and he was—as always—friendly, gracious, and very happy to take the time to say hello and talk to them.

Of the many guitarists I’ve seen or heard, Jim was constantly evolving. In 1995, Jim was 65 years old—five years younger than I am now, but to me, then and now, his age meant nothing, but his music meant everything.

I first met Jim in 1968. Oddly enough it was because of guitarist Chuck Wayne. Bassist George Cebra told me about jam sessions that were happening in Brooklyn every Tuesday night. Guitarist Louis Sossa owned a dress factory where he ran these jam sessions, which consisted of guitarists getting a chance to play with Chuck Wayne. The sessions would last till 4:00 a.m. The first time I went there, I just sat and listened, stunned by the number of guitarists who could really play and, particularly, how amazing Chuck was. But the one thing that got to me was the idolization of Chuck; everyone spoke as if he was the only jazz guitarist in the world. Sometimes I would say to the disdain of others, “What about Jim Hall? He’s different from anyone around; he’s not a bopper but a modern player, which is much hipper.” Frown, frown, and frown!

I finally sat in one night. I distinctly remember we played “I’ll Remember April.” When it was my turn to solo, I got so nervous that my left hand started to shake and I could hardly play. I was frozen. When it was over, I was so embarrassed that I left immediately and never went back. I couldn’t believe that I reacted
that way. I went into a deep depression that lasted for a while. I tried to practice my way out of it, but that wasn’t working. I knew I had to do something, but what? I needed to get over the fear of playing with well-known or famous musicians. Since I loved the way Jim Hall played and I knew he lived in New York, I found his number and called him to set up a time for a lesson.

It was a Saturday afternoon. Jim greeted me at the door. The first thing I noticed was he wasn’t as tall as I had imagined. I took out my guitar and we sat down and talked. The first thing he asked— which is the first thing I ask advanced students—was, “Why are you here?” I didn’t tell him about the Chuck Wayne incident, but instead I told him I was having trouble with very fast tempos, which was true. He called a tune and we played. The thing I loved about him was how relaxed he made me feel. There was no ego there, no “look how great I am.” He was genuinely there to help me. He showed me some improv exercises to work on and we agreed that I only needed to see him once a month. I walked away feeling good. I was totally relaxed when we played together.

Once a month I would show up and we would play. Jim would comment on my improv, but in a constructive way, which I appreciated. The one observation he made about me, which I’ll always remember was, “Do you have to play so many notes?” And I replied, “Yes.” I know he was trying to slow me down and play more meaningfully, which I understood, but I was trying to get to the same place that Coltrane was. Many would argue that on guitar it doesn’t work, but I truly believe it can be done.

The last and sixth lesson was the best thing for my ego. We played “On Green Dolphin Street” with a killer tempo. When we finished Jim looked at me and said, “We’re done. You don’t need to come back. You keep playing like that and you’ll be fine.

If it were someone else, I probably would have spent a fortune and not gotten better at all. That was Jim. He gave you just what you needed and that has been his approach to his improvisations: just the right amount of notes, no more no less, played with impeccable style and a tone that leaves you wanting more and more.

When I first met Jim he wasn’t as busy as he would have liked to be. I know this because he would tell me he would start practicing for a gig a few weeks before to get ready, and he was always ready.

As the years progressed, I would stay in touch by visiting him at the Ed Sullivan Theatre where he and Chuck Wayne held down the guitar chairs for The Merv Griffin Show. Once I brought my first published book, A Guitarist’s Guide to Chord Substitution. He was very supportive and showed it to Chuck. I miss those days.

After The Merv Griffin Show ended in the mid-1980s, Jim became very busy, as did I, but we stayed in touch. When I signed to Blue Note he was very happy for me.

Later on in the ’80s after going through a divorce and moving to Manhattan, I went through a crisis of self worth, including my playing. I kept getting accused of playing too far out, but for me that was what I wanted to do. However, I also wanted to work. Jim was playing at the Blue Note one week. I sat at the bar and watched and listened to him play. I don’t remember much from that night except his version of “Blue Monk.” He took an inside-out approach and it was in his usual style, loose and spare. A light went off in my head and I knew what I had to do. I began in my own way to play inside out, and it was because of Jim. He has always been an inspiration to me.

When I started my own record company, the first release was Takin’ The Duke Out. I sent Jim a copy. I asked him if he wouldn’t mind giving me a quote to use. A few hours later he faxed me the quote that I have saved, “New York’s best-kept secret is finally getting out!” Over the years I kept Jim apprised of what I was doing by sending him each new release.

The last time I saw him was when he was awarded a fellowship at the NEA Jazz Masters event in 2004. As far as I was concerned, it was long overdue. After the event, press and fans surrounded him as he tried to make his way out of the huge hall. I was in the middle of the crowd and just waved to him. He stopped what he was doing, came over to me and said, “I am so proud of you.” I was so touched because he was the one being honored; it has stayed with me ever since.

After Jim had a back operation a few years ago, I would talk to him every few months to see how he was. I was so happy to know he became active again. A few weeks ago, I watched a video of him performing with Peter Bernstein. Although it was a treat to see and hear him, I was concerned. He didn’t look good and on his birthday I thought I would give him a call but, being busy, I forgot. A few days later he passed away. I never had a chance to say goodbye.

Jim was the epitome of a total musician. His musicality will be an inspiration to the thousands of guitarist who will come after. He made the world of jazz a better place for all of us.

The following is from Peter Bernstein, the last person Jim worked with:

He will be missed, but left us so much to learn from as a musician and person. He was such a thoughtful and empathetic person and these qualities were expressed with such beauty and individuality in his playing. His aesthetic was so unique in that it embodied meaning in every note… His subtlety, nuance, and great expression were his alone: a true original, identifiable from one of those well-chosen notes. Jim Hall was a poet who played the guitar.

I couldn’t have said it better. Goodbye, old friend. You will have a place in my heart forever.

***
Dom Minasi has been active in jazz for over 40 years as a composer, guitarist, producer, educator, author, and journalist. Highlights of his extensive discography include I Have the Feeling I’ve Been Here Before (Blue Note, 1975), Finishing Touches (CIMP, 1999) Takin’ The Duke Out (CDM Records, 2001), and Angel’s Dance (Nacht Records), an album of duets with pianist Michael Jefry Stevens released in November 2013. 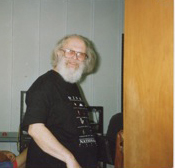