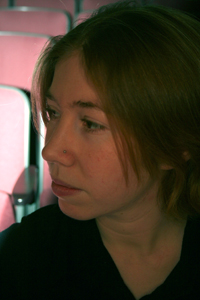 Ruby Fulton hears music in some unusual plot lines. In her ear, a case of face blindness turns into a fractured choral work, a beating is embodied by a line for steelpans, and Batman’s nemesis falls out of a string quartet.

Fulton radiates a sort of “ask me anything” energy, so when the Baltimore-based composer stopped by the Counterstream studio to chat about her work, questions were fired and she unloaded the details behind some of the stories that have inspired her and the philosophies underneath the musical choices she’s made.

Despite the complexity of many of the underlying concepts, Fulton is actually generally hesitant to disclose the narrative string beneath her work in any kind of formal program note-style exegesis. The stories are a tool she often uses to create, but she doesn’t want to control her audience and put programmatic limitations on where the music can take them. She’s happy to put out the welcome mat, but she isn’t looking to give listeners a guided tour—an analogy she picked up from composer Julia Wolfe.

“This idea of opening a door for someone and letting them explore whatever’s in there by themselves, I like that,” Fulton acknowledges.

As a young composer actively exploring sound worlds, Fulton is no stranger to such solitary investigations. After studies at Boston University, the San Francisco Conservatory, and the Peabody Conservatory, however, she was left feeling somewhat too isolated as a composer. She credits Wolfe and the people she met in 2007 at the Bang on a Can Summer Music Festival at MASS MoCA (Massachusetts Museum of Contemporary Art) with really helping her solidify her own goals in music. “I was kind of going in a direction by myself, and it was such a great experience to meet this whole community of people who were like-minded.”

She found the long-term impact of that mentorship and learning period on her work deep and personally empowering. “One of the biggest things I learned from those guys is if you find a sound or sound world that you like, just live in it; dwell in it for as long as you want,” Fulton recalls. “[Julia Wolfe] was the only teacher who ever encouraged me to repeat something for longer! Just taking delight in something you like and staying there.”

This was a switch from some of the academic training she’d had up to that point, during which she’d found herself in more discouraging situations.

“I don’t want to necessarily name any names, but he hated my music,” says Fulton, alluding to a professor who constantly prodded her to make more frequent and dramatic changes in the line of her music. After a semester of taking his artistic beatings it was time to move on. Still, she did take away some valuable lessons. “It’s kind of nice at first because you have to really know what you’re doing. I had to really try to explain myself and that was in a way a good challenge, to have to be clear.”

Though still a few years shy of 30, Fulton feels she’s now honed in on some key musical ideals, though she is still actively questioning how to best live a life in music and picking up some lessons her professors seem to have skipped over. One of her biggest discoveries: “It seems so obvious, but it took me a really long time to figure out that I should write music that I like. It seems like you would just know that, but when you’re in school in this academic institution where you’re always trying to please other people or you’re always trying to get an “A” or whatever it is, I just didn’t know that for a long time. And then it dawned on me and it was just like, oh, why didn’t someone tell me?

“When I’m teaching myself, that’s definitely going to be a big thing that I tell people all the time—What do you like? Do that!”