Most first rehearsals of a new piece for orchestra begin one of two ways. The conductor either spot checks various potentially tricky places in the score or attempts a full run-through until something goes awry, which makes everyone stop to focus on what made everyone stop. But guest conductor Steven Schick did not do either of these things back in November when he began rehearsing with the Milwaukee Symphony Orchestra for a performance of Saad Haddad’s Kaman Fantasy (one of five pieces by emerging composers performed during the 2015 Milwaukee Symphony Composer’s Institute). Instead, Schick asked the string section to play a pitch that was halfway between E and Eb. It took a while for them to find the pitch, but once they did, he then asked them to begin to play the piece. Kaman Fantasy was like nothing else on that program; indeed, it was like few things ever performed by orchestras.

Even during this first somewhat tentative reading, a magical and extremely beautiful microtonally tinged tune emerged amid various melodic fragments chock full of swirling embellishments in the strings and winds. Although the sounds were clearly being made by members of a symphony orchestra reading from parts on their stands, what they played sounded uncannily like the orally transmitted large ensemble music of North Africa and the Middle East.

When we spoke to Haddad in New York City in early March, the 23-year-old composer reflected on the Arabic music ensembles that served as a model for Kaman Fantasy. “There are like 10 to 12 violins and they’re all playing the same line in a different way, with different embellishments and slightly different bowings—sometimes completely different bowings,” he explained. “There’s no [sheet] music at all involved; it’s all done by ear. I’ve never heard a string section sound like that in any tradition and, of course, not in the Western tradition … but I was trying to do that kind of thing in an orchestra piece. The problem with working with Western musicians; you want them to be not exact, but to do that you have to show them something exact on the page and then warn them—be careful, it’s not going to be exact, that’s how it should be. But once you get the musicians to be on board with that, then you can create something really unique and really special in an orchestral environment in which it’s usually really difficult to do anything outside the box.”

Born, raised, and compositionally trained in Southern California, Haddad had never previously written anything like that for an orchestra. But his incorporation of Arabic aesthetics into contemporary Western performance practices in this eleven-minute 2015 composition was something he had been pursuing on a smaller scale in his music since 2012. In fact, Kaman Fantasy began as a duo for violin and piano in which the violin simulates the sonorities of the traditional silk-stringed spiked fiddle common throughout the Islamic world (an instrument called kemençe in Turkey and called kamancheh in Iran and throughout the Caucasus). And, encouraged from being able to make such a synthesis work on an orchestral scale, it is something which has continued to inform his subsequent forays into composing for large ensembles: Manarah for two digitally processed antiphonal trumpets and orchestra, which the American Composers Orchestra will premiere at Carnegie’s Zankel Hall on April 1, 2016; and Takht, which the New Julliard Ensemble will premiere at Lincoln Center’s Alice Tully Hall on April 21. However, Haddad was quick to point out that he still thinks of himself as a beginner and even somewhat of an outsider when it comes to having a deep knowledge of Arabic musical traditions.

“I’m an American for sure,” he admitted. “I’ve never even gone to the Middle East … so I’m not going to pretend that I know everything there is. I have a lot to learn. The only thing I hope I can contribute is that I can really showcase the beauty of the culture and the beauty of the music. There’s a lot of stuff in it that’s really cool.”

While he is currently pursuing a master’s degree at Juilliard under the tutelage of John Corigliano, Haddad has yet to find a parallel mentor who can offer him a deeper knowledge of the arcana of maqam, the complex Arabic modal system. Most of his knowledge of this music has come from surfing websites and carefully studying YouTube videos of the iconic Egyptian singer Umm Kulthum, whose 1975 funeral attracted more than four million mourners. Although his grandparents were huge fans of Kulthum and Farid el-Atrache, a popular singer-songwriter originally from Syria, Haddad never had any direct exposure to this music in his formative years.

“I never thought I was going to use this music until a few years ago,” he acknowledged. “When I was growing up, I was listening to a lot of Bee Gees and ‘80s music because my mom was really into that stuff. And then I listened to Mozart and Beethoven and all the big classical giants.”

Once he started creating his own music, he initially followed a path typical of many young American composers. He wrote a Michael Jackson-inspired composition scored for a post BoaC All Stars-type ensemble of soprano sax, electric guitar, keyboard, and drum-set, a few short orchestra pieces, and two lovely settings of poems by William Blake for unaccompanied chorus. He even dabbled in film music under the auspices of the John Williams Scoring Stage at USC, which instilled in him a deft command of musical narrative that would later inform other kinds of collaboratively created work, such as his Nekavim, a very effective dance score for two percussionists and live electronics created for choreography by Sean Howe. But an epiphany while he was back at home over the summer only a few years ago is ultimately what led to his current compositional direction. It began with something completely mundane: his mother asking him to transfer his family’s home movies off of aging videocassettes. As he explained:

We had like 200 twenty-year-old home videos and you can’t burn them like CDs; you have to watch the whole thing. So I’m sitting there watching … and see all my older relatives twenty years younger and I started getting really connected to it. So I thought, “Why don’t I write a piece using this material?” I went in with ProTools and tried to take the snippets that I liked. I had no idea what I would do with them; I was just making a catalog of interesting sounds from my childhood. And then I thought, “If I’m going to use my family as an influence, I ought to use their music, too.”

The resultant piece, Mai for string quartet and live electronics (2013), would serve as a blueprint for everything he has composed since then.

The microtones and all the embellishments that are really typical with Arabic music are really easy to get with a string quartet, especially when you’re working with them. So I worked with the Argus Quartet on this and we played it a few times at USC. Then it won a BMI Award the next year, and it was kind of a confirmation for me. So I started to explore this even more.

But Haddad is not at all dogmatic in his transfer of Arabic music theory to pieces that are designed to be interpreted by musicians trained in Western classical music and performed for its usual audiences. For example, while the microtonal gradations that occur in traditional Arabic music are extremely subtle, Haddad is content with limiting himself to quartertones.

Splitting the scale into 24 notes is the easiest way to think about it without going into it so in-depth. If you’re asking a bunch of players to do it, you have to tell them to play this quartertone, because if they’re all playing different shades of it, it doesn’t sound like what you want. It sounds like a cluster or it sounds like it’s wrong. How do you make it sound like it belongs? That kind of approximation, I think, does a big thing for it; you still have the feeling that it belongs to the maqam when you’re using quartertones. … There are certain things you can do that make it easier for an orchestra. Have the microtones in first or second position in each of the strings. Have them a little lower so you can really hear them; if they’re really high up, sometimes it sounds like a wrong note. “How do I make it idiomatic for the orchestra?” is something I’m always thinking.

The way that Saad Haddad has forged a balance between being practical and a desire to take risks is almost as seamless as his balancing of Western classical and Middle Eastern musical traditions. It is particularly surprising considering that he has come to such realizations while still a student. But even here, Haddad balances a duality: a desire to always be a student but never to be held back by thinking like one.

It’s only in name that I feel like I’m a student right now. No matter how old you are, you’re always learning things. You’re always going to be a student. But I’ve never said, “I’m a student, so I need to act like a student.” The more that you think you’re a student, you’re going to be writing “student music.” You need to think outside that kind of shell and say, “What do I want to do?” and don’t worry about anything else. 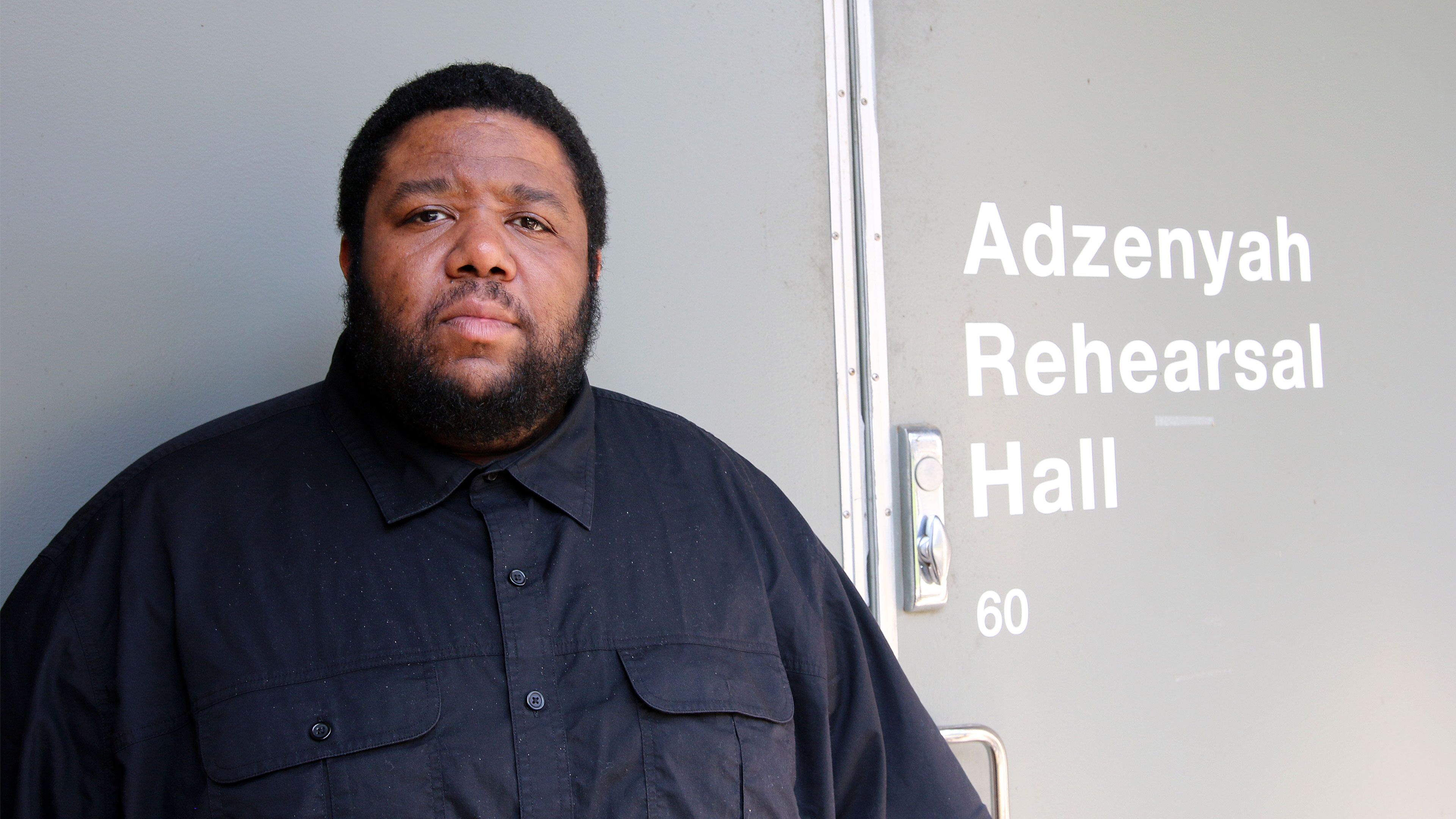