We all know that the soundtrack changes the way we experience a movie. One of my favorite examples of this comes from a meme that appeared about ten years ago in which participants recut classic films into new trailers in different genres. West Side Story, a tragic musical (original trailer), became a horrific zombie movie (revised trailer), and The Shining (original trailer) was turned into a feel-good family film (revised trailer). When it comes to silent film, accompanists have infinite choices. Even in the early days of cinema, accompanists could improvise, select pieces from their own libraries, follow suggestions from cue sheets, or use the scores that came with some big-budget pictures, or any combination of these. Today, some accompanists try to recreate the sound of early cinema in their own performances, while others revel in using music that has been created since then.

Buster Keaton’s 1927 comedy The General is a popular choice for showings with live accompaniment, and it has also been released in multiple versions on DVD. Set during the Civil War, the film is essentially one long chase, culminating with the famous scene of a train plunging through a burning bridge into a river.

The film is based on a real incident in which Union spies made a daring attempt to steal a Confederate train engine called the “General” from Big Shanty, Georgia, just north of Marietta. The General’s engineer and a small corps of Confederate soldiers commandeered another engine, the “Texas,” and sped off in pursuit. After an action-packed event known as the Great Locomotive Chase, the Union soldiers were stopped and the General was returned to the South. In adapting the story for film, Keaton stated, “While this picture will be designed primarily for laughs, it is my aim to make it historically correct and equally acceptable in the North and the South. It will not be a burlesque, but a comedy spectacle of certain thrilling episodes in the struggle between the States.”[1] Keaton’s intention was apolitical, claiming at the time that “you make villains out of the Northerners, but you cannot make a villain out of the South.” And so Keaton plays the hero, a Confederate engineer who stops the Union soldiers and returns the engine to the South. 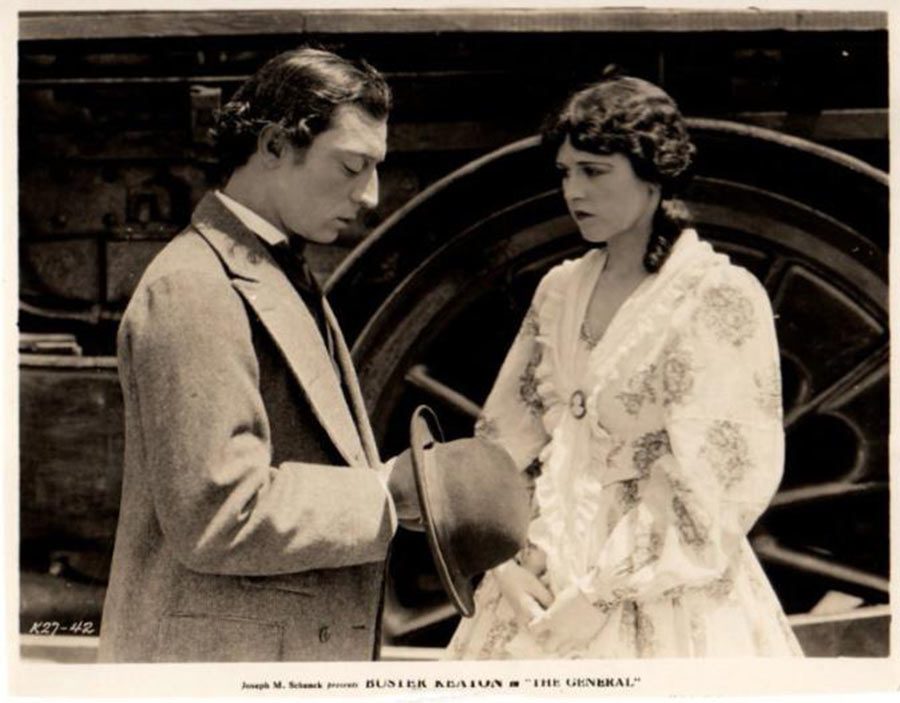 Buster Keaton and Marion Mack in The General

Because the Civil War was still highly visible in everyday life and culture well into the 1910s and 20s, many accompanists at the time relied on nostalgia for wartime songs. James C. Bradford published a cue sheet for the film that included “Alabamy Bound,” “Dixie Queen,” “I’ve Been Working on the Railroad,” “Maryland, My Maryland,” “Dixie,” and “Old Folks at Home.” He also suggested burlesque versions of the “Light Cavalry” Overture and “My Own United States;” other recommendations include the 19th-century works “An American Battle Scene” by Theodore Moses Tobani, which was an 1898 musical portrait of the battle at Antietam and dedicated to the Union Army; and “Memories of the War” by L. P. Laurendeau.

Numerous pieces from Bradford’s list are problematic today, but perhaps none more so than “Dixie.” “Dixie,” of course, was created for blackface minstrelsy in the 1850s. It is important to understand what it represented to people in the 1920s who might have heard it in conjunction with The General, as their reaction was likely to be quite different from what many of us think today when we hear the song. “Dixie” itself began as satire, making fun of a former slave who longs to return to the plantation, and both Northern and Southern soldiers and performers claimed the right to use it, usually with different lyrics, during the War. It became the de facto anthem of the Confederacy and remained closely associated with the “Old South.” Eubie Blake and Noble Sissie used the song in their 1921 musical Shuffle Along, and it appears to have been regarded as an uncomplicated signifier of the South in general during the ’20s and ’30s. In 1934, The Etude (one of the most popular and influential music magazines of the time) dismissed all connections between the song and white nationalism. Clearly this changed between that time and today, in part because of white Southerners’ revival of the song as a symbol of opposition to the Civil Rights Movement. Today, the performance of “Dixie” in any situation is extremely complex, involving issues of race and class. And so while it has become a traditional exercise in nostalgia for both the time periods of the film’s action and its cinematic release to use “Dixie” in accompanying The General, each modern use must be carefully read to determine intent and meaning: whether its inclusion is meant to represent contemporary accompanying practices; if it is representing the Confederacy, and how; or whether it appears as part of a valorization attempt on the part of a performer to present the film as political rhetoric for the Confederacy.

Today, if you watch The General at home on DVD or Blu-Ray, you can select from one of six scores included on recent commercial releases. Each of these modern accompaniments (by Carl Davis; Robert Israel (two scores: one for piano and strings and one for full orchestra); Lee Erwin; Joe Hisaishi; and the Mont Alto Moving Picture Orchestra, led by Rodney Sauer) seeks to replicate one of the many manners in which the film might have been accompanied in the cinema at the time of its release. Davis’s accompaniment is scored for full orchestra, while Hisaishi’s uses a smaller ensemble. Lee Erwin’s score is played on the Mighty Wurlitzer, the “king of cinema organs.” Mont Alto recreates a typical small theater orchestra of piano, violin, cello, clarinet, trumpet, and percussion. Screenings with live musicians can rent a newly created score by Timothy Brock for accompaniment, or hire an improvising accompanist like Ben Model of MOMA and the Library of Congress to perform.

These newer accompaniments for The General vary in their approaches to scoring the film. Composer and performer Mark Orton has gone so far to recreate a historic Civil War sound as to find, restore, and use portable, folding reed organs known as field organs as part of his orchestration, which also includes popular 19th-century instruments like the zither and its cousin the marxophone, autoharp, and harmonicas of various sizes and ranges. Although modern audiences may not be able to name these instruments, they may well associate the instruments’ sounds with music of another era and/or the South.

Carl Davis’s score uses a full, modern orchestra, and is primarily composed of pre-existing 19th-century orchestral works for the concert hall, but retains traditional performance practices such as including period tunes; he gives the film’s genre as parody a nod by also incorporating minor-key version of “Dixie.” Robert Israel’s score is likely similar to what audiences would have heard at large motion picture palaces in 1927. Composed for a medium-sized orchestra with piano, Israel’s score establishes several generic themes at the beginning of the film, including a love theme, a theme for the Union villains, bugle calls, and music for hurrying and chasing. Israel frequently incorporates “Dixie,” and “When Johnny Comes Marching Home” as major themes. Israel mimics Paul Dukas’s The Sorcerer’s Apprentice to signify some frantic physical movements and quotes Rossini’s overture to Semiramide as part of the battle sequence at the end of the movie. Although the Dukas work wouldn’t take on its iconic association with Mickey Mouse until 1940, it was often included in collections of pre-existing music for film accompaniment for suspense or “creepy” situations; Rossini was also a popular choice for exciting music for races, battles, and other high-movement scenes. Here’s an excerpt from Israel’s score from the beginning of the engine chase.

For smaller picture houses, a small ensemble may have supplied the entire accompaniment, or it could have been accompanied by an organ, like Lee Erwin’s score, or piano, such as William Perry’s improvised piano score.

Erwin’s and Israel’s scores obviously make use of pre-existing pieces. One group that seeks to eliminate the metamusical meanings older pieces can carry is Chicago’s Quasar Wut-wut. Quasar Wut-wut scored The General in 2014 and departs entirely from the previous approaches.

There are numerous other soundtracks for the film, including mash-ups of James Bond themes and other pieces written for other films; numerous piano or organ-only accompaniments; and several for small ensembles, such as an earlier Israel score and a score by the Mont Alto Motion Picture Orchestra. Each score offers a slightly different take on the action in the clips shown here. Israel’s provides a sense of anticipation and anxiety as the engine pulls away, followed by traditional markers for drama (continuous eighths in the left hand and a melodramatic, minor-key melody), while Erwin’s mimics the sound of a train horn and a minor-key theme that deepens into the sound of more serious trouble as Keaton’s character realizes he’s alone. Perry’s score offers the same non-stop playing and agitated rhythms, but is far more light-hearted and matches the action of the soldiers and Keaton’s character, providing musical mimesis for the scene. And Quasar Wut-wut gives us a score in which the heavy percussion and basic chords of the first part of the scene give way to an ironic commentary with a lighter set of instruments as the engine pulls away, suggesting the obliviousness of Keaton’s character and the humor of the moment.

With an enormous range of extant pieces to choose from, accompanists both in the past and now have great opportunities to frame and reframe silent films in various ways, suiting them to particular audiences, settings, or their own tastes.

► ▼2 thoughts on “Setting the Scene with Sound: (Re)Scoring Silent Film”