When planning a recital, or a recording for that matter, it’s important to me to commingle works by composers who have a reason for being together, who share a connecting link of some sort. In the past I’ve combined John Adams with Terry Riley, Esa-Pekka Salonen and Steven Stucky with Witold Lutosławski, and Olivier Messiaen with Kaija Saariaho.

Montage: Great Film Composers and the Piano was just such a commingling, and a collaboration that was bound to happen one day given my years of living in Los Angeles and working with composers. In the first article of this series, I sang the praises of L.A. as a place to live and work as a musician. Outside of our prodigiously enlightened Los Angeles Philharmonic that engages fulltime musicians, it’s always been possible here for freelance players to keep very busy in the city’s many orchestras, opera companies, chamber series, and film studios, and even to have solo careers. They’ve been able do all of it in a place where there is no cognitive dissonance in having worked with both Pierre Boulez and John Williams.

Montage had its beginnings in 2011, when Bruce Broughton, a composer best known for his work in film and television and the recipient of 24 Emmy nominations and 10 wins among other awards, sent me a substantial surprise gift: his Five Pieces for Piano. The suite comprises five boldly delineated character pieces written in the exceptionally pianistic language of a composer who happens to be an accomplished pianist.

Around that time, I was preparing a recital for Tanglewood’s 2012 Festival of Contemporary Music, and had asked John Williams, who is among other things an annual headliner at Tanglewood, if he might have time to write a little something for it. We had talked for years about the possibility of a new piano piece, and I now had a perfect time and place at which to program it. I assured him, repeatedly, that even just a single page of music would do, just so that I could represent him on my program. In due course, he produced a short piece for me to play as an encore: “Phineas and Mumbette,” a richly imagined conversation between jazz legend Phineas Newborn, Jr., and Mumbette, a Berkshires-based slave who sued for her freedom in 1781 and won. And the piece was indeed only a single page of music: 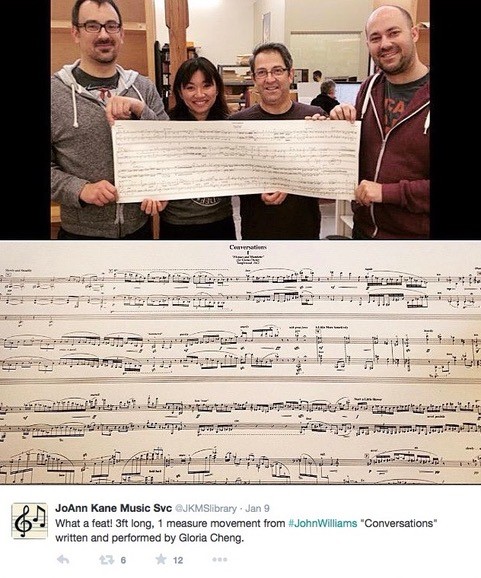 Following that summer, with the pieces by John Williams and Bruce Broughton continuing to virtually stare at me from my piano every day, an enticing theme for a future recital, anchored by two eminent composers of worldwide renown for their film music, was presenting itself, and I was finding it impossible to ignore.

There was one minor glitch. Because the timings of the two pieces were far short of a full program, I would need to somehow convince a few more composers of similar ilk—and similar illustriousness, I hoped—to write additional pieces that would flesh out an eventual evening-length recital.

I approached composers whose film music I admired, and about whom I couldn’t help but wonder how they might write for solo piano. This is how, in addition to the works by Bruce Broughton and John Williams (who composed three additional movements to form a suite entitled Conversations), three new pieces came to be written for me by film music luminaries Don Davis (The Matrix trilogy), Michael Giacchino (Ratatouille, Up, The Incredibles), and Randy Newman (The Natural, Toy Story, Monsters, Inc.). Instead of a new piece, Alexandre Desplat (The Curious Case of Benjamin Button, Argo, The Grand Budapest Hotel), offered me a recent suite that he had composed for the pianist Lang Lang.

At the time, these six composers had collectively garnered 72 Oscar nominations and 8 wins (the numbers are both higher now). All six had written concert works in the past, but all had largely bypassed writing for solo piano. That’s precisely what interested me. These composers are acclaimed and awarded for their brilliance at managing multiple parameters with regard to style, narrative, tone, and timing. But they are always telling someone else’s story, and typically writing for large orchestras.

What would happen if everyone just left them alone to write a concert piece—for the piano, an instrument that just about every composer regards as a consequential challenge given its monumental repertoire and potential to reveal one’s truest, unadorned voice? 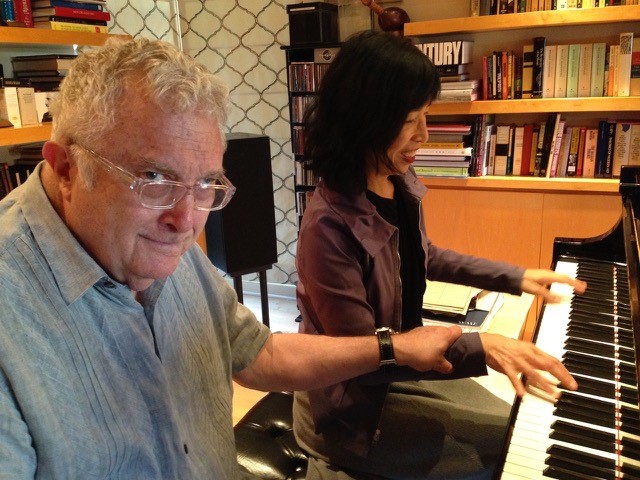 Over the course of 2012-2013 the pieces arrived. In the cases of Don Davis and Michael Giacchino, all at once; with Randy Newman and John Williams, one movement at a time. The final steps prior to the November premiere were to coach with each of the composers and collect a program note in their own words about their pieces. The concert, presented by the Piano Spheres series, drew not only our loyal new music attendees but throngs of the composers’ fans. Except for the Paris-based Alexandre Desplat, the composers were in attendance and being surrounded like rock stars. I began the program with Bruce Broughton’s bracing Five Pieces, followed by Michael Giacchino’s wistful Composition 430, Don Davis’s modernist Surface Tension, Alexandre Desplat’s impressionist-tinged Trois Études, Randy Newman’s songful Family Album: Homage to Alfred, Emil, and Lionel Newman, and John Williams’ jazz-spiked Conversations. Many listeners found it fascinating to note whose piano pieces resembled their film music and whose did not.

Given the prominence of the six composers, it seemed inevitable and necessary to document their pieces on a recording. Harmonia Mundi took an interest. Two days of recording were booked with Grammy-winning producer Judith Sherman in Herbert Zipper Hall at the Colburn School, the venue in which I had performed the concert.

As it turns out, the recording dates of Easter Sunday 2014 and the Monday after proved to be unexpectedly auspicious. Five of the six composers would be in town and said that they could and would attend the recording sessions. Only Alexandre Desplat was scheduled to be away from Los Angeles on those dates, but would be back soon afterwards.

When would a convergence of such celebrated composers working on the same project ever occur again? That’s when I got the crazy idea to make a documentary film. I imagined a film that would capture our interactions during the recording sessions, offer interviews with each of the composers, and chronicle the arduous process of getting our record “in the can.” A Kickstarter campaign drew close to 100 supporters whose generous donations provided major funding for the enterprise. Credit for coming up with Montage as the title for the project, encompassing both the album and film, goes to John Williams. 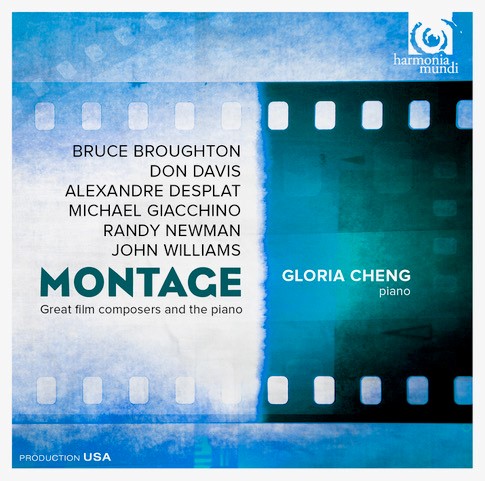 The full story of recording this CD and ending up with a documentary about it would take many more paragraphs. It was an immense undertaking, and if amassing and practicing the collection for concert performance had been a challenge, managing the CD recording along with a film shoot presented multitudes more.

I had recorded four CDs already with Judith Sherman and knew how that would proceed; she would be tough and meticulous, and would work tirelessly with me towards a final edit for the CD release. I had engaged the noted film music authority Jon Burlingame to write a liner booklet essay that would accompany the composers’ own notes. My CD agenda was predictable and all set to go. But I knew nothing about making a film, and knew few people who did.

When one lives in Los Angeles, one finds “industry” people on every corner. 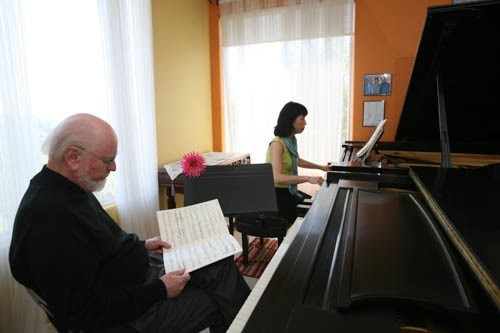 In all, the crews had generated hundreds of hours of footage from multiple-camera shoots. Given the brilliant direction by my neighbor Joey Forsyte who supervised her crew as a fly on the wall during those long hours of recording takes, the film was assembled and polished over the course of two years by the gifted team at Breakwater Studios. Much precious, one-of-a-kind footage did not make it into the final film as it was edited to less than a half-hour; a quiet tête-à- tête between Randy Newman and John Williams reminiscing about the old days at 20th Century Fox sadly got cut. Nonetheless, our documentary won numerous festival awards, has aired on PBS SoCal six times, and, to our immense shock and joy, won the 2018 Los Angeles Area Emmy for Independent Programming.

The documentary broaches a wide range of topics. How do these composers vary their creative processes when writing for the concert hall instead of for a movie? “If a director wants you to turn left,” remarks Bruce Broughton in the film, “you’re advised to turn left. Writing a piece like this, I am the director; the piece is the film.” Most of the composers confess to being decidedly challenged by writing for piano. “There’s no hiding…you do worry more about every single note,” says Michael Giacchino. “It made me nervous,” confides Randy Newman. “I’m not ready to write again for piano,” vows Alexandre Desplat, with a laugh. “It took me a lot of time to figure it out!” The film also exposes the laboriousness—both onstage and in the booth—of recording a CD. We had a few laughs during those two days, but there was mostly fierce focus from us all and, in one of the film’s most talked-about moments, occasional frustration.

John Williams sums it up by saying, “Gloria has broken the mold by inviting film composers to be exactly not that, to be simply composers.” It is indeed the music itself that reveals a lesser-known but vibrant, expressive world inside of these six composers—an alternative, more intimate side of them that is often eclipsed by the spectacular popularity of their film music.

I find a strikingly clear voice in each of the pieces, each an unmistakable depiction of the person who wrote it. What I had hoped to learn by embarking on this project was: What happens when these composers, freed of the demands placed on them by a film, confront the challenge of composing for one of the most difficult instruments to write for? Although Montage: Great Film Composers couldn’t possibly provide all of the answers, we do get a little closer to finding out.