from Science is Only a Sometimes Friend by Aaron Siegel 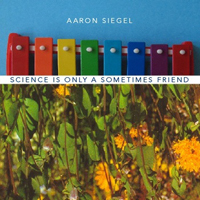 At the present time we have available for our perusal an extraordinary amount of music, more than in any other period in human history. And within that overwhelming assemblage there are countless treasures which instantly call attention to themselves, and still more that gradually reveal their priceless secrets when patiently examined through repeated listening. Then there are a handful of works which not only grab your attention from the first second you hear them straight through to the end (allowing you to do absolutely nothing else in the interim) and reveal additional charms when listened to multiple times, but also stay in your mind even after you have finished listening. Such a work is Aaron Siegel’s Science is Only a Sometimes Friend.

When it arrived on my desk, the cover immediately jumped out at me with its crisp, vibrant colors and the juxtaposition of photos of man-made and natural objects—a section of a toy glockenspiel and an array of leaves and flowers. The eight slabs of the toy glockenspiel, all uniformly parallel though each in a completely different pastel shade, provide a somewhat jarring contrast to the seeming randomness of the more muted green leaves which are impossible to accurately count and also obscure the equally unquantifiable yellow flowers (plus several purple ones that sprawl onto the back of the gatefold of the CD slipcase). In fact, it is difficult to determine with certainty if the photo is right side up or upside down, or even what plant or plants these leaves and flowers come from. It is a very apt visual metaphor for the sonic house of mirrors that is Aaron Siegel’s nearly 42-minute single movement composition from 2009, scored here for eight glockenspiels and organ.

Science is a relentless cascade of overlapping semiquaver ostinatos played on the glockenspiels, which shimmer as they gradually change against a much slower ever-shifting series of chords played on an electric organ. It is one continuous ecstatic sonic event that mesmerizes, transfixes, and transports. While you are listening to it, you feel like you have been teleported through a vortex of endless doorways which keep opening but ultimately never go anywhere and that your journey will never end. And when it does, it is a really hard crash back to reality. (To celebrate the release of the disc, Science will be performed live in New York City as part of the Incubator Arts Project’s concert series at St. Mark’s Church in-the-Bowery on May 24; I hope they’re equipped to handle to the potential after effects of a whole group of people coming down simultaneously at the end of the concert.)

Unfortunately the CD comes with no program notes, but according to an email response I elicited from the composer:

“When I wrote Science Is Only a Sometimes Friend, I had been thinking a lot about the limits of rationalism. As a society, we have been infatuated with the slow march of scientific and technological progress for a very long time. And we are getting to a point in the history of humanity where we actually think we have discovered absolute understandings about so many things. I am no enemy of science, but I also think there is something exciting about believing in something that can’t concretely be proved or reasoned. I think this embrace of mystery is a really important part of making art and I think it is also a big part of listening to and experiencing Science Is Only a Sometimes Friend.”

Curiously, the work was originally conceived as an outdoor composition in which the regularity of the eight glockenspiels’ interlocking grid is not pitted against slowly moving organ chords but rather by audience participation on toy glockenspiels. The indeterminate result is certainly less immediately rational; its lack of grounding is akin to Terry Riley’s In C without the pulse (which was added to that piece during the rehearsal process). At the same time, the outdoor version is unabashedly corporeal and far less narcotic. Below is a segment from that original performance which is also fascinating; it’s a pity that both versions could not have been released together as a 2 CD set.

Admittedly Siegel’s compositional gambit in Science clearly echoes such minimalist classics as Steve Reich’s Music for Mallet Instruments, Voices, and Organ, Terry Riley’s Olsen III (as well as In C), and—for its volume and sheer visceral intensity—early Philip Glass pieces like Music in Similar Motion and Music in Fifths, all of which were composed long before Siegel (b. 1977) arrived on the scene. But Siegel’s musical vocabulary—which not only embraces uncompromising minimalism and indeterminacy, but also free improvisation and elements of indie rock, and which thus far has also yielded trippy all-electronic compositions, a series of 21 aphoristic solo percussion compositions for his own performance, and an unusual somewhat Dadaesque opera called Brother Brother, plus sideman stints with Anthony Braxton and collaborative improvisations with violinist Sam Amidon as well as the cooperatively led trio Memorize The Sky (also featuring Zach Wallace and Matt Baude)—is not watered-down second generation revisionism. It is, rather, a vital continuation of several important strands of maverick American experimental music.

Aaron Siegel talks to Mike McCurdy, one of the eight glockenspielists from the ensemble Mantra Percussion, about the evolution of Science