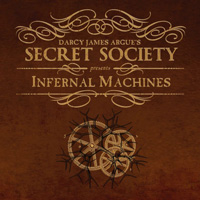 One of the nifty things about living as a creative artist in a place like New York City is that the sheer volume of people here acts as an enabler for totally impractical ideas. For instance, only a creative mind could think hiring a large group of horns and winds to perform anachronistically outerstream music would be worth the sweat and labor in the United States’s costliest city. So it stands to reason there’s been a bit of a big band renaissance in the Big Apple. It’s a surprisingly diverse scene as well; to take two examples, Kelly Fenton’s Bottomless Cup Jazz Orchestra and the Sparks Orchestra seem like they’re from different planets, much less genres. And there’s plenty around to suggest that there’s lots left to do with large ensembles of improvisers.

Among the young turks, Darcy James Argue has the most heat. He and his steampunk-themed band Secret Society have been on the scene for several years, and were even featured as a cover in this magazine way back in 2006. Yet despite having made the rounds, and despite also having been exceptionally generous at providing downloads of almost all of the band’s live gigs on his website, Argue hasn’t released anything commercially until now. This leave-them-wanting-more patterning of behavior has even led to a certain amount of hype for Argue’s first release, a term that pretty much only otherwise occurs in new music writing when it’s being horribly misused. Nevertheless, Argue’s tactics—intentional or not—pay off for Infernal Machines, Secret Society’s debut release on New Amsterdam Records. It was worth the wait.

A lot of the talk about Argue is about his transcendence of boundaries, but it’s not so much the putative barrier breaking that’s interesting; the gateway Argue is going through, with its electronics, non-Western instruments, and concurrent salutes to several different traditions, was already opened by Don Ellis and others. What’s really interesting about Argue is actually his intelligence. The fact that he realizes that bringing a thrash beat to big band jazz is way less interesting than writing a big band jazz piece that needs a thrash beat. The fact that he knows that just because he can incorporate disparate elements into his music with greater ease than most doesn’t mean he always should. That he knows how to make each element speak for its own while communing with the whole.

But even if in the end it’s Argue’s musical sagacity that keeps the listener involved, his propensity for stylistic inclusiveness is nonetheless what sets him apart from his peers. It’s one thing to brandish indie influences right on the sleeve, but it’s another thing entirely to actually make music that could convincingly be called big band or indie rock. Not that it’s totally true that that’s what he does—at the base of Argue’s music still lies an adherence to traditional forms of jazz. But that impulse for the old time big band is kind of paradoxically and skillfully combined with a desire for dialogue with other forms of music. In fact, this inclination is given center stage from the very start of Infernal Machines with the opening track Phobos. It starts with percussionist Jon Wikan beating on a cajón with a treble-boosted delay, followed by Matt Clohesy’s simple and repetitious bass riff. Guitar feedback and pick slides manage to blend really well with the trepidatious entrance of the winds and brass in a way that is still totally obscuring the fact that this is an 18-piece band; you don’t even get a real full sense of the instrumental forces involved until more than three minutes in, when Mark Small turns in a burning sax solo. In fact, you wouldn’t even know it was jazz until then unless somebody pre-labeled it for you. It’s undeniably a provocative statement.

It’s also a bit of a disingenuous one, at least in terms of the album’s contour. Nothing else on the whole record sounds like these first three minutes, the rest generally being more rooted in the jazz tradition than any other (the exception being the discrepant ’80s-instrumental-rock guitar solo in Red Eye). But that isn’t really the point; opening up with a post-rock riff isn’t a mission statement so much as a caveat to abandon preconceptions of what big band music sounds like, which is indeed useful to understanding the rest of stylistic acrobatics the record goes through.

This syncretic strategy can and has led to some seriously wretched music elsewhere. Genres are difficult for even the most visionary minds to synthesize in so self-conscious a way as Argue attempts, since, per evolutionary tendency, the longer two traditions have been historically separated the less they have to do with each other. Re-colligating the pieces becomes an almost sphynxian riddle with time. Argue is successful because he approaches each problem on its own terms, instead of trying to make things fit together simply because they’re part of the gestalt he’s after, or part of the zeitgeist the marketing team covets. For instance, he realizes that the key to blending materials lies with timbre way more so than melody or harmony.

So now listen again to Phobos: the specific sounds made by percussion and bass that open the piece are heretofore alien to the jazz world, and bringing in the brass over this groove can easily lead to overt novelty and kitsch. But the fact that everything blends so naturally makes it seem totally congruous, creating a world where both overdriven guitar and soft winds coexist without baggage. It’s done with remarkable simplicity, and it’s hard as hell to pull off.

In a way, Argue almost seems to dare you to write everything off as a gimmick; but it doesn’t take. The steampunk analogy is actually pretty apt for what’s being pursued, and the musical pieces fit together too well to have been over-considered. Everything flows, both in the individual tracks and on the album as a whole. Argue will write more music, and will eventually release another album. It will be difficult to top this effort—but then again, why the hell wouldn’t he?