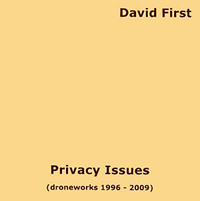 The recordings of David First cover a pretty broad terrain of styles, from the uncompromising experimentalism of his mid-1990s O.O. discs releases Resolver and The Good Book’s (Accurate) Jail of Escape Dust Coordinates Part 2 to the rebellious punk of his late ’70s band The Notekillers (which was a formative influence on Sonic Youth) and the infectious indie pop of Universary from 2002. But no matter what his medium, First’s music usually involves his own participation on variously modified electric guitars, an unlimited microtonal pitch continuum where the beats between “in tune” and “out of tune” intervals become the basis of a new concept of melody, and relentless repetition or a very gradual transformation bordering on stasis. The latest collection of First’s music, Privacy Issues, is a generous three-CD set of First’s self-described “droneworks” spanning the past 14 years, appropriately released on XI, a label run by Phill Niblock, the patron saint of drone-based minimalism. While using the “droneworks” moniker perhaps warns folks away who are unable to deal with unwavering musical processes, First’s results are extraordinarily varied and sonically bountiful.

A Bet on Transcendence Favors the House, from 1998, consists of a total of 13 parts, each recorded on an electric guitar using an e-bow which allows for infinite sustain. The parts, which consist of single pitches, are then processed via the computer programming language Csound and either remain static or gradually slide up or down. It makes for a pretty intense listening experience, and for further enlightenment, First has even posted the score on his website. My Veil Evades Detection; My Veil Defies Exhaustion; My Veil and I Divorce (2001) is similarly constructed, but its combination of violin, clarinets, piano, guitar, and ebow guitar, offers a much broader timbral palette.

Happy Beatday, created for a friend’s birthday in 2004 (gotta love First’s titles), is a brief psychoacoustic experiment exploring difference tones created from the beats of recorded slide whistle tracks. The even briefer (barely over a minute) Tell Tale 2.1 from 2003, uses transistor radios to create a theremin effect. The Softening Door, and aw! â€“ Drawling Spout â€“ Holi Spank, both also from 2003, are from First’s Operation:Kracpot Plays The Music of the Sphere, which he has described as “the sound of the earth and brainwave manipulation meet gestural improvisation.” Basically, every musical parameter (e.g. pitch, pulse, location, etc.) is derived from the harmonics of a sphere, specifically that of the Earth, and the drones are derived from measuring the Schumann resonances—nothing to do with Robert or Clara, but rather the peaks in the extremely low frequency range of the Earth’s electromagnetic field spectrum. This might sound overly deterministic and icily mathematic, but First’s sonic results are nevertheless compelling and frequently dazzling, if a bit reminiscent ’70s sci-fi now and then. Belt from 2002, also derived from computations of the Schumann resonances, is far more austere, but it is a real hypnotic mindbender all the same.

The 41-minute Pipeline Witness Apologies to Dennis (2006-09)—a memorial to First’s one-time teacher, the late Dennis Sandole who had also taught John Coltrane—begins as a quasi-psychedelic exploration of the overtone series featuring multiple layers of solo trombone in seeming Dopplerian conflict with one another. But at about 24 minutes in, a bona fide overtone melody emerges, which, by the last ten minutes, transforms into a positively lush and euphoric quartet for two trombones, keyboards, and ebow guitar—featuring spirited performances by Christopher McIntyre, Peter Zummo, “Blue” Gene Tyranny, and First. By the end, it really is no longer a dronework.

But, for me, the piÃ¨ce de rÃ©sistance is the earliest and by far the most obdurately drone-oriented of all the works collected herein, Zen Guilt/Zen Blame from 1996. According to First, the work developed after his dissatisfaction with both just intonation and the pitch limitations of the Kurzweil K2000R, whose ability to deliver 1200-tone equal temperament (the mind boggles) still cannot reproduce the beat-less intervallic relationships that are only possible with the untempered pure ratios of just intonation. Since he wanted to have both beating and beat-less relationships in his music, First devised a way to import theremin-controlled Digidesign’s Turbosynth samples into the Kurzweil and sequence them using Emajor’s Notator on an Atari 1040ST. (Remember when Atari was a major player in the computer industry?) Anyway, Zen Guilt/Zen Blame involves an elaborate process in which different pure ratio drones are successively accumulated and then bend, going in and out of tune with one another, and as a result you can clearly hear the beats getting slower and then faster and then disappearing altogether. A chain of pure fifths (3/2) is gradually generated from three starting points—the tonic (1/1), a pure minor third (6/5), and a pure major third (5/4)—and occur in numerical relationships to each other over time that are directly proportionate to their ratios. Eventually there are a total of 21 drones and the entire process takes 720 hours—30 days. The current recording only captures the first 35 minutes and 40 seconds. David First claims he’s heard the first several hours of the process many times, and that even he has never actually heard the whole thing. But I say bring it on; I’m ready!