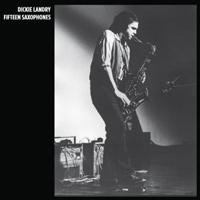 It’s amazing to discover how much the post-genre polystylistic free-for-all of early 21st century music was already happening in the music of many of the forgotten composers and improvisers of the 1970s. The spirit of adventurousness that permeated all kinds of musical genres in the late 1960s led to some truly undefinable sonic experiences throughout the following decade, evolving into a truly cross-pollinated aesthetic only to be much more niche-defined and streamlined, for the most part, as soon as the 1980s hit. It’s a sobering historical lesson that creators of our own time and their fans should remain mindful of lest it happen again. New World’s triple CD release a few years back introduced new millennium listeners to the provocative music of gay African American iconoclast Julius Eastman, whose compositions foreshadowed a post-minimalist sound world even as strict minimalism was still in its heyday. Equally revelatory is the music of Dickie Landry.

Fans of Philip Glass will remember the Cecilia, Louisiana, born and raised Landry as the saxophonist who participated in all of the classic 1970s recordings of the Philip Glass Ensemble, first on Glass’s own Chatham Square label and then on Tomato Records. Perhaps Landry’s most unforgettable moment in music history was his saxophone solo in the bed scene of the premiere production of Einstein on the Beach, the only section in the entire opera that momentarily broke away from Glass’s crystalline cellular structures and allowed some improvisation to creep in. On the original recording of Einstein it sounds like the performance by a fabulous composer in his own right. Well, it is.

Landry’s own music from the 1970s is a fascinating amalgam of minimalism, free jazz, and psychedelia, indicative of the kind of omnivorous creativity that pervaded Downtown Manhattan at that time. Three of his comprovisations were released on an LP by a small independent label called Northern Lights back in 1977, and was later briefly available in Europe on Wergo, but it has been out of print for decades. This album has been one of the holy grails for record collectors. Thankfully, Unseen Worlds has seen fit to re-issue this important historic missing link on both CD and LP, and it sounds tremendous in both formats.

The opening track, “Fifteen Saxophones,” is indeed that, but they are all played by Landry thanks to a delay unit and overdubbing and the sorcerer-like engineering of Kurt Munkacsi, another alumnus of the Philip Glass Ensemble whose ability to mix the inputs of the other members of Glass’s ensemble live during performance Glass considered so significant that he placed him alongside them onstage as a member of the group. Landry’s resulting chorus of saxophones is wonderfully dreamy but not in a lulling way. There is occasionally a slightly assaultive quality to Landry’s timbre that always keeps you a bit on edge and makes for even more exciting listening.

On “Alto Flute Quad Delay,” Landry switches, as you might infer, to alto flute. The overall tone is much smoother. Its relative serenity acts as something akin to an ear rinse for what comes next—the wild “Kitchen Solos.” On the LP, the listener is required to flip sides before this third and final piece begins which allows for even more preparation time.

On “Kitchen Solos”—named since it was performed live at the famed Downtown music space, The Kitchen, but just as easily a metaphor for its “kitchen sink free-for-all”—Landry pulls out all the stops, so to speak. The dream has turned into a nightmare, but one that you won’t necessarily want to wake up from too soon. Landry’s saxophone tone becomes downright menacing at times and its multiple iterations through electronic enhancement create a threatening army. This totally unexpected sound world that is equal parts Albert Ayler and Philip Glass, with a little Don Ellis thrown in, was a path that no one else took at that time. One can only hope that in the vaults somewhere there is a lot more of it. And luckily Landry is also still around, in Lafayette. (An interview with him from 2009 can be found here.) Rightfully the re-issue of this music should make people aware of his singular voice and lead to opportunities for him to share it with audiences in a live setting once again.