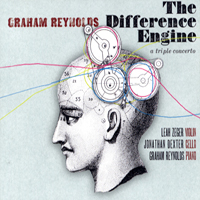 Austin, Texas-based composer Graham Reynolds’s The Difference Engine: A Triple Concerto does not waste notes getting your attention. A shriek of scraped strings launches a frantic run through the opening moments of this five-movement work, scored for violin, cello, and piano with small string chamber ensemble. According to Reynolds, the speed was a nod to Charles Babbage and his work on the first programmable computer and was “inspired by the ferocious pace of both Babbage’s thinking and the calculating speed of his invention.”

In the 20 minutes of music that follow the high-velocity kick off, The Difference Engine spans moments of beautiful melancholia to coarse, bow-grinding rhythmic churning. That Reynolds is no stranger to composing for theater, dance, and film is evident even in this purely instrumental work. (His score for Richard Linklater’s A Scanner Darkly may be the most high-profile project, but his catalog runs much deeper than that, much of it involving his long-standing Golden Arm Trio.) His language here is evocative and direct: It is as if Reynolds is delivering to your ear a mysterious and ambiguous tale in sound—wildly open to interpretation, of course, but it’s a page-turner nonetheless.

The pace of the first movement, “The Cogwheel Brain,” glides into the soft reflection of “Ada.” Delicate piano notes inside a lush string bed of unison playing lead toward moments of mournful solo cello and violin lines. A light blooms in the music as it moves, however, settling into a bittersweet memory of a piece.

The muffled tones of a prepared piano and gritty string playing that follow kick the imagery in a new direction for the third movement, “Cam Stack & Crank Handle.” In contrast with the awesome mechanical rhythms coming out of the ensemble, a secondary theme literally swoops in with an irresistible shoulder-shaking and hip-swaying beat—and enough swagger and glissandi to seduce the house.

Reynolds takes another turn toward the quiet in the broad and reflective “Late at Night/The Astronomer” before launching into the flash of the work’s closing movement. Showcasing a similar speed and fire found in showstopper masterpiece cadenzas of many years past, the three soloists are given room to throw down, pausing for only a few moments of thematic respite before they and the chamber players behind them make their wild and full-speed dash for the double bar.

Five more tracks of remixed material follow up on this conclusion however, providing a kind of dessert at the end of the disc that allows other minds to dig around in the music and spin the frame. Contributions from Octopus Project, Adrian Quesda, Peter Stopchinski, DJ Spooky, and the composer himself each offer a twist on various moments from the proceeding concerto, processing and overlaying new electronic sounds into the mix. The degree of fresh creativity brought to the music varies, with Adrian Quesda contributing what may be the most memorable remix in the set: a sultry soundtrack tinted with 1970s character that would probably make Connery-era James Bond feel right at home.