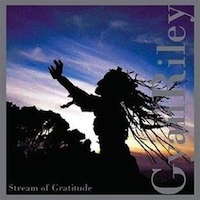 If you have been to the theater to catch Alejandro González Iñárritu’s most recent film, Biutiful, you’ve seen the complex emotional ache that lines the face of actor Javier Bardem throughout the feature. I found myself returning to this image again and again as I absorbed Stream of Gratitude, Gyan Riley’s new release out on Tzadik. While not weighing the listener down with quite as heavy a dose of gloom, the album’s four works for solo guitar, all performed by the composer, carry with them a solitary, introspective intimacy that echoed my experience of watching the down-and-out and dying Bardem move through Iñárritu’s creation.

Riley’s meditations reflect a bit more of the joy and light to be found in the world, though a certain serious weight pervades even the quick finger work and harmonics of the “Ipick” movement of his Four Etudes and the fantastic speed on display in “Tohm Tan” from Zonata and the “Gigue” from the title track. Other tracks do take a more melancholy cue; the real standout to my ear found in the stretched rhythmic pacing and muted tones woven into “Uspavanka for Téa”, also from Zonata. The bits of breath and scratches of fingers against strings that are occasionally captured on the tracks amplify the sense of close familiarity fostered by the music.

Riley notes that the compositions showcased herein consist “entirely of material composed for and dedicated to individuals and entities who have influenced my musical experience over the years, and to whom I am forever grateful.” Those names run the gamut: J.S. Bach, Egberto Gismonti, John Dowland, Agustin Barrios Mangoré, John McLaughlin, Zoran Dukic, and the Mother Lands, which goes some way to illustrating his catholic tastes and influences. He brings to the performance of each work an astoundingly clean and at-ease technical facility, leaving the richness of each composition plenty of room to shine.

These are not compositions that make any sudden moves, and yet they deeply engage the listener over and over on repeated listening. With this collection, Riley shows himself to be a highly skilled performer of music that is both deeply personal and profoundly inspired. They truly are beautiful, in the most complex and nuanced definition of the word.